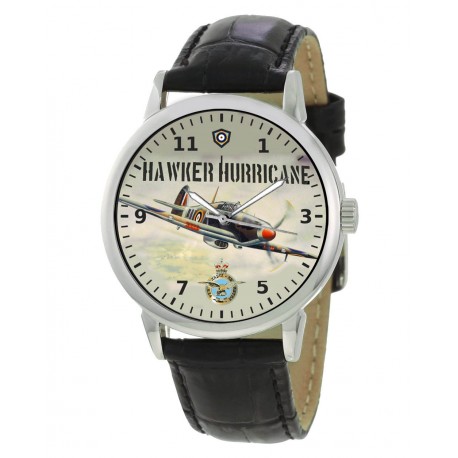 The Hawker Hurricane is a British single-seat fighter aircraft that was designed and predominantly built by Hawker Aircraft Ltd for the Royal Air Force (RAF). Although overshadowed by the Supermarine Spitfire, the aircraft became renowned during the Battle of Britain, accounting for 60+ of the RAF’s air victories in the battle, and served in all the major theatres of the Second World War.

The Hawker Hurricane was designed by Sir Sydney Camm. With the Hurricane, Sydney Camm moved from the technology of the biplane to contemporary monoplane fighter aircraft. The result was that fighters flew faster, and with the improved engine technology of the time, higher, and could be made more deadly than ever.

The Hawker engineer Frank Murdoch was responsible for getting the Hurricane into production in sufficient numbers before the outbreak of the war, after an eye-opening visit to MAN diesel plant in Augsburg in 1936.

The Hawker Hurricane was the first operational R.A.F. aircraft capable of a top speed in excess of 300 m.p.h. The design of the Hurricane, directed by Sydney Camm, was the outcome of discussions with the Directorate of Technical Development towards the end of 1933, aimed at breaking the deadlocked biplane formula. In these discussions Camm proposed a monoplane, based otherwise on his Fury biplane, using the proposed new Rolls-Royce P.V.12 engine (later to become the Merlin), and in time incorporating a retractable undercarriage. Originally, in concert with current armament requirements, a four-gun battery was proposed; but in 1934, with successful negotiations to licence-build the reliable Colt machine gun, it was deemed possible to mount an eight-gun battery in the wings, unrestricted by the propeller arc and thus dispensing with synchronising gear.

The first Fighter Command squadron to receive Hurricanes was No. 111, commanded by Sqdn. Ldr. John Gillan, based at Northolt before Christmas 1937; and it was the squadron’s C.O. who flew one of the new fighters from Turnhouse, Edinburgh to Northolt, London at an average ground speed of 408.75 mph (659.27km/h) – a feat which earned the pilot the nickname “Downwind Gillan” for all time. Nos. 3 and 56 Squadrons took delivery during 1938, though the latter was not operational at the time of the Munich Crisis in September of that year. By the outbreak of war a year later 497 Hurricanes had been completed from an order book totalling no less than 3,500. At about this time the Gloster Aircraft Company started sub-contract manufacture of the standard Mark 1, which was now emerging from the factories with metal wings and three-blade variable-pitch propellers. One final refinement was adopted between the outbreak of war and the opening of the Battle of Britain; this was the Rotol constant-speed propeller which, apart from enabling the pilot to select an optimum pitch for take-off, climb, cruise And combat (thus bestowing a better performance under some of these conditions) also prevented the engine from overheating in a dive.

A total of 1,715 Hurricanes flew with Fighter Command during the period of the Battle, far in excess of all other British fighters combined. Having entered service a year before the Spitfire, the Hurricane was “half-a-generation” older, and was markedly inferior in terms of speed and climb. However, the Hurricane was a robust, manoeuvrable aircraft capable of sustaining fearsome combat damage before write-off; and unlike the Spitfire, it was a wholly operational, go-anywhere do-anything fighter by July 1940. It is estimated that its pilots were credited with four-fifths of all enemy aircraft destroyed in the period July-October 1940. [source: Hawker Hurricane – Battle of Britain – raf.mod.uk]

Designed and built to Air Ministry specification F.36/34, as modified by provisions of F.5/34, and ordered under contract No. 357483/34 from Hawker Aircraft Limited, Kingston. This aircraft was first flown by P. W. S. Bulman on the 6th November, 1935. It was powered by a 1,025 h.p. Rolls-Royce Merlin “C” engine, driving a Watts two-blade fixed pitch wooden propeller, the aircraft was without armament, and weighed 5,416 lbs. There were evaluation handling and performance trials held at A. & A. E. E., R. A. E., and Rolls-Royce Limited, 1936. Eight Colt Browning machine guns were fitted and flown in August of 1936. Service trials held at Martlesham Heath commenced in March of 1936, first flight was by Flight Sergeant. S. Wroath on the 16th March, 1936. K5083 was allocated as a Ground Instruction Airframe, and allotted the R. A. F. maintenance serial 1211M, during May 1939. The aircraft was finally taken on charge by Hawkers and said to have remained airworthy until 1942!

The 1930s design evolved through several versions and adaptations, resulting in a series of aircraft which acted as fighters, bomber-interceptors, fighter-bombers (also called “Hurribombers”), and ground support aircraft. Further versions known as the Sea Hurricane had modifications which enabled operation from ships. Some were converted as catapult-launched convoy escorts, known as “Hurricats”. More than 14,583 Hurricanes were built by the end of 1944 (including at least 800 converted to Sea Hurricanes and some 1,400 built in Canada by Canadian Car and Foundry).

Hawker Hurricane PZ865 is now operated by the Royal Air Force Battle of Britain Memorial Flight and was the last of 14,533 Hurricanes produced. PZ865 first flew at Langley, Berkshire on 22 July 1944 (just four years after V7497 flew from Langley) in a special ceremony, Chief Test Pilot P. W. S. ‘George’ Bulman flew the aeroplane on this occasion – having made the first flight of the prototype Hurricane from Brooklands almost nine years earlier.

Group Captain Paul Bulman CBE, MC, AFC & Two Bars, FRAeS (8 April 1896 – 6 May 1963). ‘George’ Bulman, was born in Luton in 1896. In the First World War Bulman transferred from the Honourable Artillery Company to the Royal Flying Corps and served in No. 46 Squadron RFC and No. 3 Squadron RFC. He was awarded the Military Cross on 4 February 1918 for his services flying Sopwith Camels at the Battle of Courtrai.

THE LAST OF THE MANY

Hawker Hurricane IIC, PZ865, The Last of the Many!, the final production Hurricane, is rolled out of the Hawker factory at Langley in 1944. Date: 1944

PZ865 moved to the Hawker factory at Dunsfold Aerodrome on 1 May 1950. It was flown into second place at the 1950 King’s Cup Air Race by Group Captain Peter Townsend and the aircraft also appeared in the filming of the Battle of Britain film. In 1972 the aircraft was refurbished and presented by Hawker’s successor company, Hawker Siddeley, to the Royal Air Force’s Battle of Britain Memorial Flight then based at RAF Coltishall, reverting to its RAF serial as identity. For many years the aircraft appeared as ‘The Last of the Many’ but eventually the inscription was removed and put on display in the BBMF headquarters.

V7497 IS A TRUE BATTLE OF BRITAIN VETERAN

Aircraft produced by Hawker Aircraft Limited at Langley, near Slough, Berkshire, UK. To Contract 62305/39, powered by Rolls-Royce Merlin III’s. Aircraft deliveries commenced on the 2nd July, 1940 and were completed on the 5th February, 1941. Average rate of production about two aircraft per day. The first 25 aircraft of this block were completed with fabric covered wings, but were later modified to metal wings at Maintenance Units, the remaining 475 aircraft completed with metal wings by manufacturer.

Hurricane Mk I (revised)
A revised Hurricane Mk I series built with a de Havilland or Rotol constant speed metal propeller, metal-covered wings, armour and other improvements. In 1939, the RAF had taken on about 500 of this later design to form the backbone of the fighter squadrons.