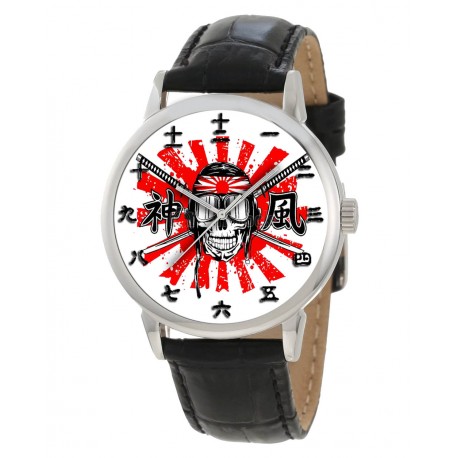 listen); "divine wind" or "spiritwind"), officially Tokubetsu Kōgekitai (特別攻撃隊 "Special Attack Unit"?), abbreviated as Tokkō Tai (特攻隊?), and used as a verb asTokkō (特攻 "special attack"?), were suicide attacks by military aviators from the Empire of Japan against Allied naval vessels in the closing stages of the Pacific campaign of World War II, designed to destroy warships more effectively than was possible with conventional attacks. During World War II, about 3,862 kamikazepilots died, and about 19% of kamikaze attacks managed to hit a ship.[1]

Kamikaze aircraft were essentially pilot-guided explosive missiles, purpose-built or converted from conventional aircraft. Pilots would attempt to crash their aircraft into enemy ships in what was called a "body attack" (体当たり; 体当り, taiatari) in planes laden with some combination of explosives, bombs, torpedoes and full fuel tanks; accuracy was much better than a conventional attack, the payload and explosion larger, although a negative aspect to this tactic was that only 11% of kamikaze attacks were successful.[2] A kamikaze could sustain damage which would disable a conventional attacker and still achieve its objective. The goal of crippling or destroying large numbers of Allied ships, particularly aircraft carriers, was considered by the Empire of Japan to be a just reason for sacrificing pilots and aircraft.

These attacks, which began in October 1944, followed several critical military defeats for the Japanese. They had long since lost aerial dominance due to outdated aircraft and the loss of experienced pilots. Japan suffered from a diminishing capacity for war, and a rapidly decliningindustrial capacity relative to the Allies. Japan was also losing pilots faster than it could train their replacements. In combination, these factors, coupled with the unwillingness to surrender, led to the use of kamikaze tactics as Allied forces advanced towards the Japanese home islands. 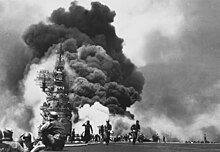 USS Bunker Hill was hit bykamikazes piloted by Ensign Kiyoshi Ogawa  and Lieutenant Junior Grade Seizō Yasunori on 11 May 1945. 389 personnel were killed or missing and 264 wounded from a crew of 2,600.

While the term "kamikaze" usually refers to the aerial strikes, it has also been applied to various other suicide attacks. The Japanese military also used or made plans for non-aerial Japanese Special Attack Units, including those involving submarines, human torpedoes, speedboats anddivers.[citation needed]

The tradition of death instead of defeat, capture, and perceived shame was deeply entrenched in Japanese military culture. It was one of the primary traditions in thesamurai life and the Bushido code: loyalty and honour until death, as the Japanese perceived it.