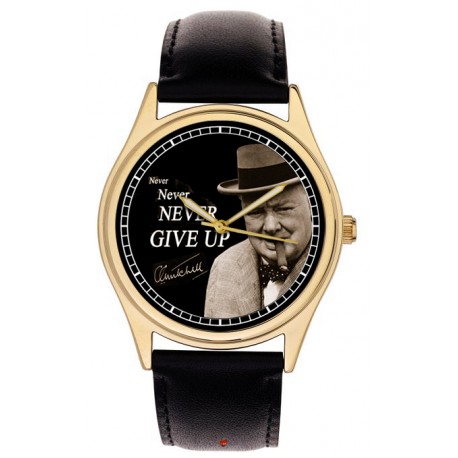 How popular history distorts Churchill’s “never give up” speech

He didn’t say or mean it that way

You probably heard about the famously short commencement speech supposedly given by Winston Churchill, in which he said:

According to the story, the courageous, eccentric, cigar-chomping British prime minister — the man who had the guts to stare down Hitler and save the world from Nazi domination — uttered these words, lowered his heavy frame and sat down, speech completed.

Nice mug. Many more to choose from. Too bad he never said it.

The general public perceives it as one of the most concise and memorable speeches in history. It has become an inspirational rallying cry — along with Vince Lombardi’s “winners never quit” slogan (which, as I show in this story, is false because Lombardi himself quit several times).

Lombardi: a Winner who Quit

The point people like to make quoting Churchill and Lombardi is to never give up under any circumstances, no matter the pain, cost, self-sacrifice and suffering. To which history says: Baloney!

The Churchill “never give up” quote as used by most is inaccurate because it doesn’t consider the context in the rest of Winston’s famous speech providing darn good reasons, even obligations, to give up.

This happens all the time in history. When a quote from someone famous is repeated often enough we eventually accept it as accurate, especially if the quote conforms with our modern-day image of who that person was and what he or she believed.

People, however, are complex and conflicted, and so is history.

In this article, I attempt to show how the popular history of Churchill’s speech to his alma matter, the all-boys Harrow School, on October 29, 1941, has been distorted.

Four inaccuracies on the popular history

It’s amazing what you can learn on this contraption called Google these days. A couple of hours of clicking around showed me that the Churchill story as commonly told and interpreted is inaccurate because:

Below is the key passage of the speech, taken from a transcript at The National Churchill Museum:

Winston’s two reasons to give in

Churchill provided huge loopholes to his general rule to “never give” in when he says “except to convictions of honor and good sense.”

In other words, consider quitting when:

Application to your life and mine?

When you are in the middle of a pressure-packed situation as England was in World War II — it’s easy to get disoriented in “the fog of war.” Your emotions may tell you to give up and give in. But you can’t trust your emotions.

The best example from my life is when I was fired at age 50 in the middle of a Recession.

I thought my career was over

My back was against the wall, just like England’s. Recovery appeared unlikely.

Would Winston’s loopholes apply to me?

Allies came to the rescue to bolster my strength and fortitude. Yes, I got fired at 50, and that was humiliating. I also got fired UP after 50, which has been inspiring and rejuvenating.

It’s unclear if Churchill’s “never given in” admonition was intended to be an ideal for all people for the rest of time or a pep talk to a school at a particularly perilous time in that nation’s history.

Here’s my personal takeaway: Like Churchill in World War II, acting courageously with stubborn perseverance can inspire others to victory and become your legacy — if you “never give in.”