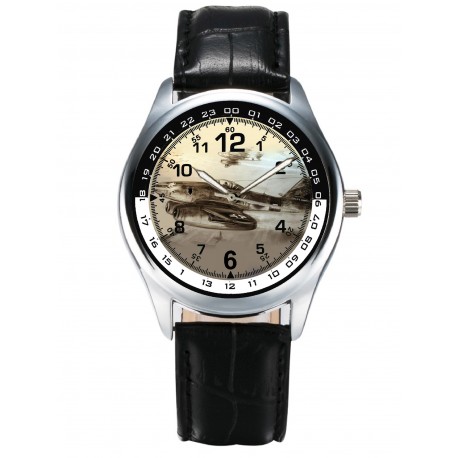 the first jet fighter changed aerial combat forever, but it didn't do Hitler any good 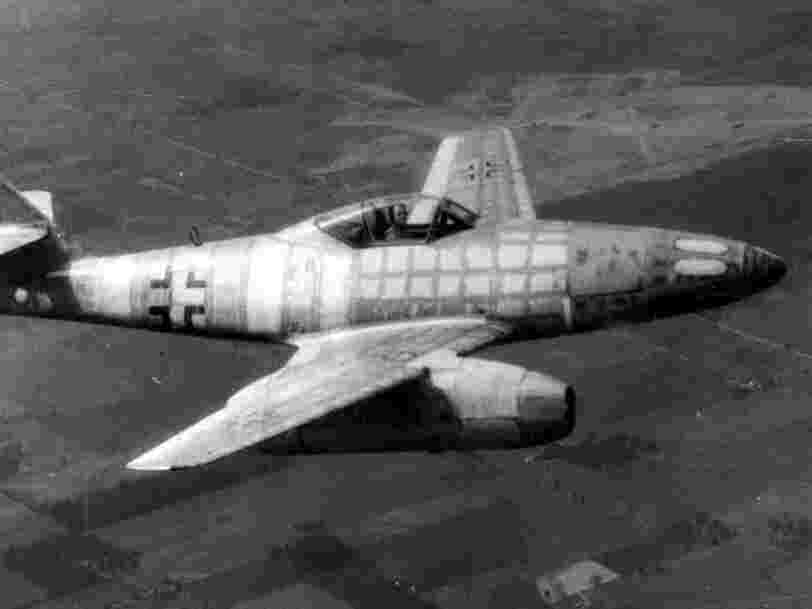 76 years ago, the first jet fighter changed aerial combat forever, but it didn't do Hitler any good

In summer 1944, the Nazis debuted one of the many advanced weapons they devised during World War II: the Messerschmitt Me 262.

On July 26, 1944, Flight Lieutenant A. E. Wall of the Royal Air Force's 544 Sqn. was flying his de Havilland Mosquito over Munich on a high-altitude reconnaissance mission. The Mosquito, one of the fastest planes in service at the time, was unarmed and flying at almost 30,000 feet.

Wall and his navigator, Pilot Officer A. S. Lobban, were not overly concerned about being intercepted. By that point in the war, the Luftwaffe was not able to put up serious resistance, and this type of Mosquito should have been able to outrun any aircraft before it could get within range.

But shortly after the photos were taken, Lobban noticed an enemy aircraft closing in. Wall throttled his engine and entered a downward turn to get away, reaching speeds over 400 mph.

To their astonishment, it wasn't fast enough.

Not only did the bandit close in, it flew alongside the Mosquito to identify it. It then lined up for an attack and opened fire.

A fierce 15-minute chase ensued. Unarmed, the Mosquito relied on its better agility to flee from the unknown aircraft. After numerous close calls, Wall managed to escape by hiding in a cloud bank. His aircraft was damaged, and he was forced to make an emergency landing in Allied-controlled Italy.

Wall and Lobban had just encountered the Luftwaffe's newest weapon: the Messerschmitt Me 262 — the first operational fighter jet in history. 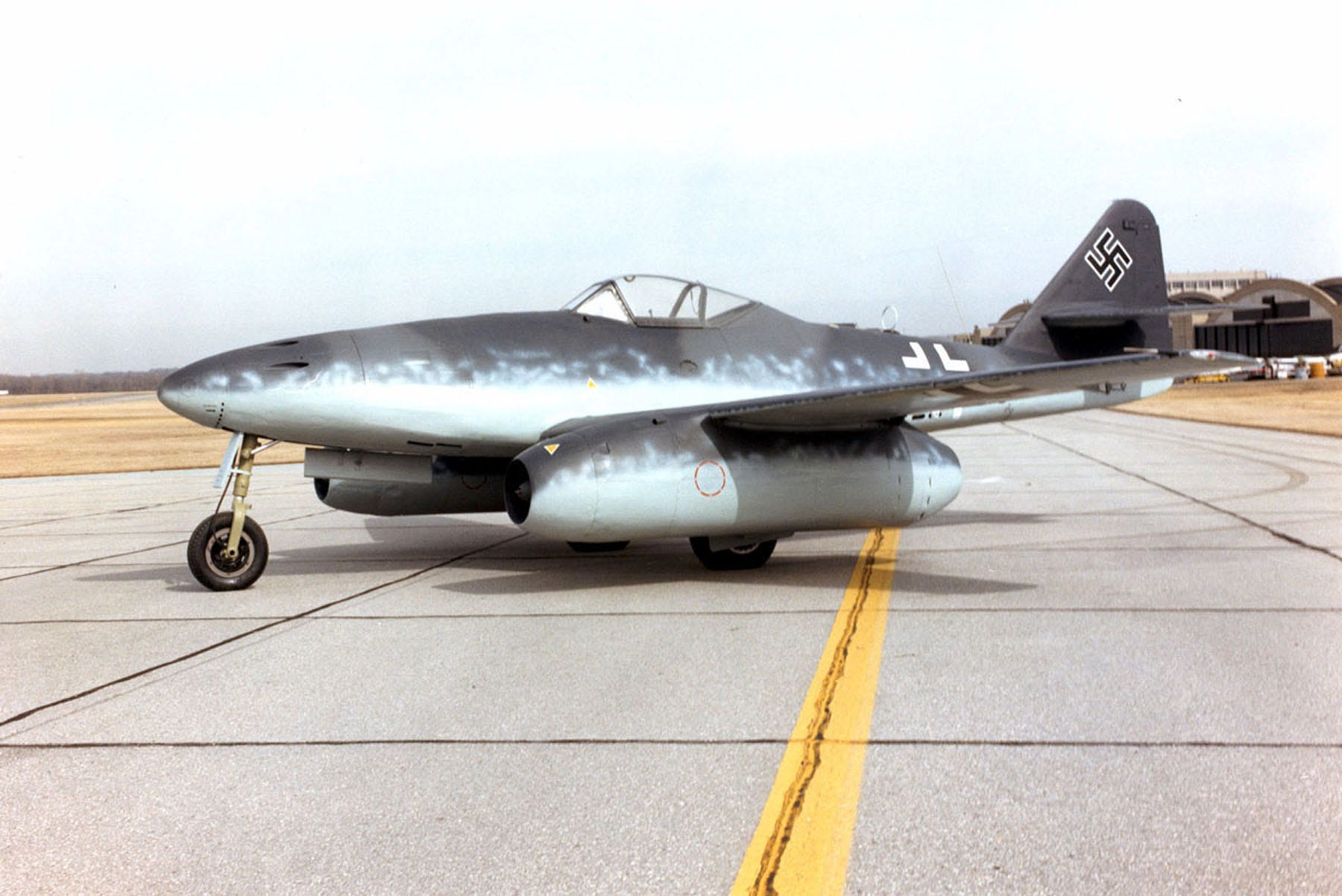 The development of jet aircraft was originally a priority for the Nazis. They created and flew the world's first jet aircraft, the Heinkel He 178, on August 27, 1939 — just five days before the start of the war.

Development of the Me 262, known as "Projekt 1065," also began before the war. Progress on the fighter was slow due to technical and political issues, and the original design was changed multiple times.

Both Junkers and BMW were building engines for the fighter, with the Junkers Jumo 004 eventually selected. But the engines proved extremely difficult to design, and their delivery was delayed.

There was also a shortage of heat-resistant materials, which drastically reduced the amount of time the jets could fly, as they generated a massive amount of heat.

Thus, a number of design changes were made. The engines had to be mounted under the wings instead of inside them as originally planned, and the wings themselves had to be swept because the engines were heavier than expected, which changed the aircraft's center of gravity.

Along with these hurdles, many political, military, and industry leaders in Nazi Germany believed the resources invested in the jet should instead be put into tried-and-true conventional piston-driven aircraft. 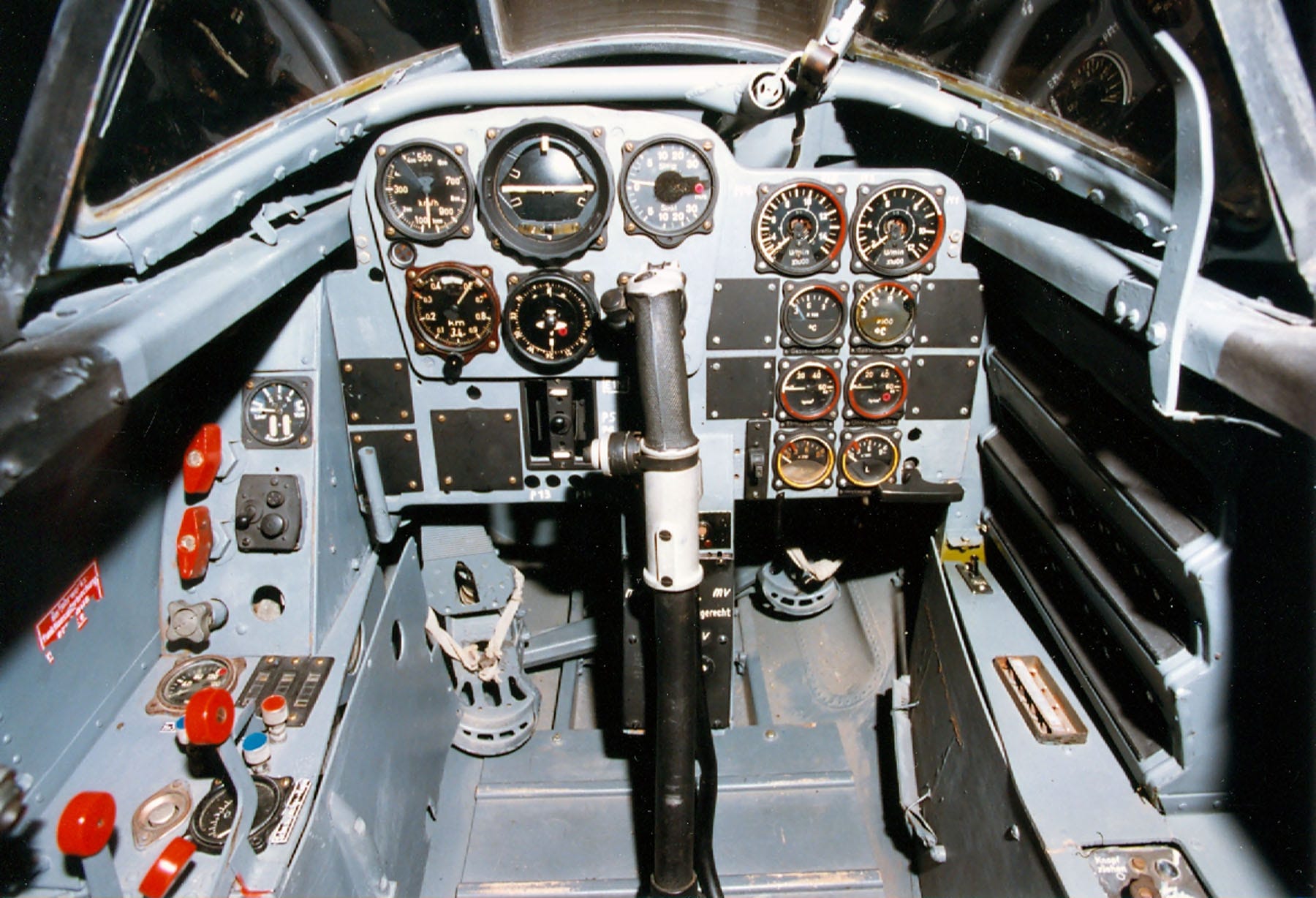 A Messerschmitt Me 262A cockpit at the National Museum of the US Air Force in Dayton, Ohio. US Air Force

Because Hitler insisted that the Me 262 be used a bomber, the majority of the jets were given to the Luftwaffe's bomber force, but the Me 262 was most effective as a fighter. (A number of different variants saw service, including a two-seater night fighter.)

Two weeks after its combat debut in July 1944, the Me 262 scored its first confirmed kill. By the end of the month German pilots claimed that Me 262s had shot down 19 Allied aircraft while losing only six jets.

The Me 262 outclassed virtually everything the Allies could throw at it. Its top speed of 540 mph made it almost untouchable, and its four 30 mm MK-108 cannons, each capable of firing up to 650 rounds a minute, tore up anything they shot at.

The fighter could also carry 24 R4M air-to-air rockets, which proved to be devastating when fired en masse against tight formations of Allied bombers.

In one engagement, 37 Me 262s engaged more than 1,200 US bombers and fighters in the biggest air raid on Berlin. They shot down an estimated 16 bombers and one fighter for the loss of only three jets.

Over the course of the war, Me 262s are believed to have shot down 542 Allied aircraft while losing only 100 jets. One German pilot later said that fighting in an Me 262 "was like being a god in a way."

Too little, too late 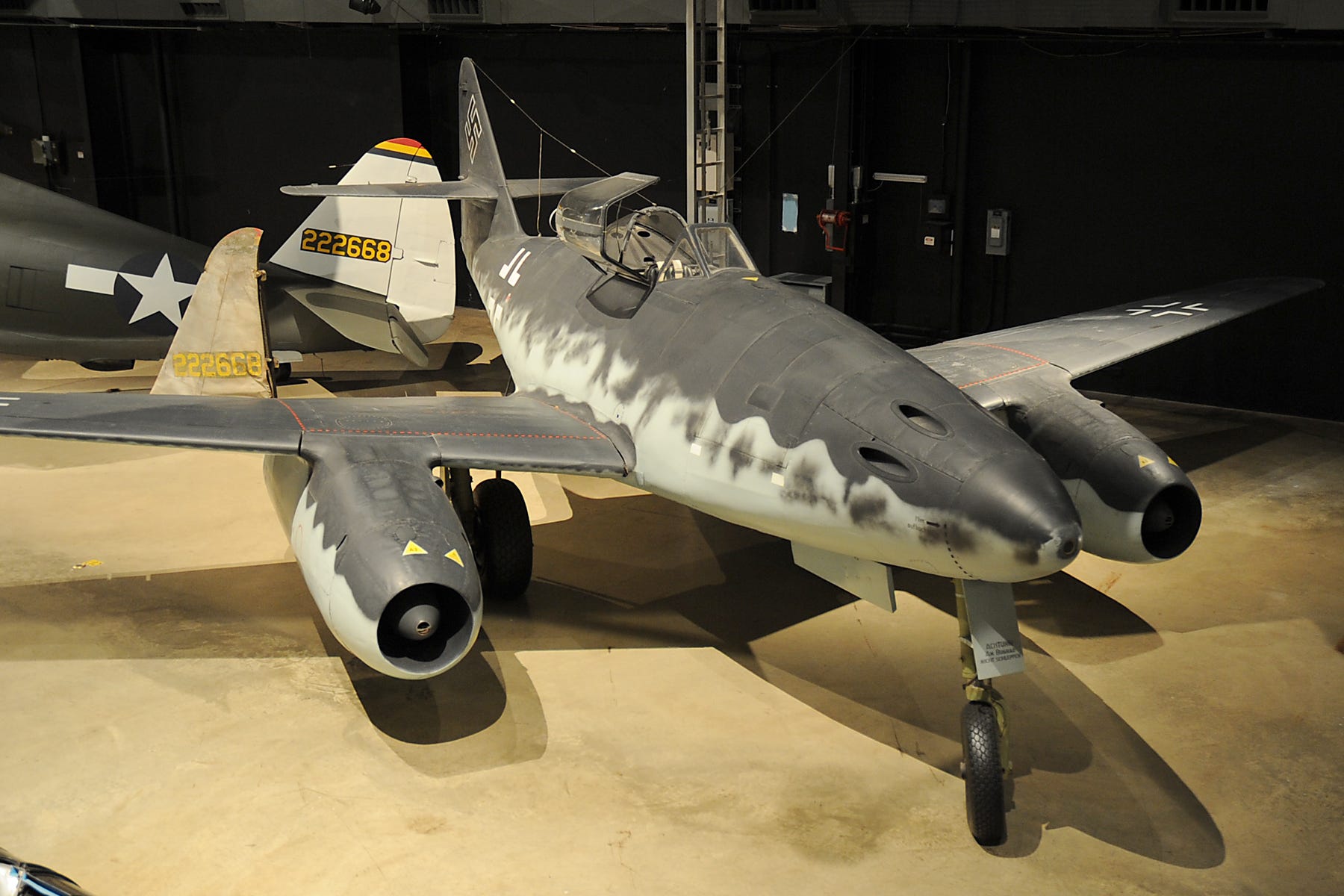 A Messerschmitt Me 262A at the National Museum of the US Air Force in Dayton, Ohio. US Air Force

Despite the damage it wrought on Allied aircraft, the Me 2626 was too little, too late. By 1944, Allied air power vastly outnumbered the Luftwaffe, making Me 262 victories statistically insignificant.

Since they were such complex machines, they required a lot of time and resources — two things that Nazi Germany had very little of in the last two years of the war. Of the 1,400 Me 262s built, fewer than 300 saw combat.

The Allies also adapted to the Me 262; they specifically targeted the jet's airbases and destroyed the factories producing them, reducing their numbers and the Germans' ability to replace engines. They also targeted oil-storage facilities.

The loss of the bases and factories, combined with severe shortages of fuel and pilots as the war raged on, meant the Me 262s, already small in number, were unable to win the war of attrition that Germany was fighting.

But the Me 262 made a profound impact on aviation history, proving that jets were the future of aerial warfare. They continued to be built and flown in Czechoslovakia until 1951 and directly influenced the designs of the F-86 Sabre and MiG-15 — icons of the jet age.