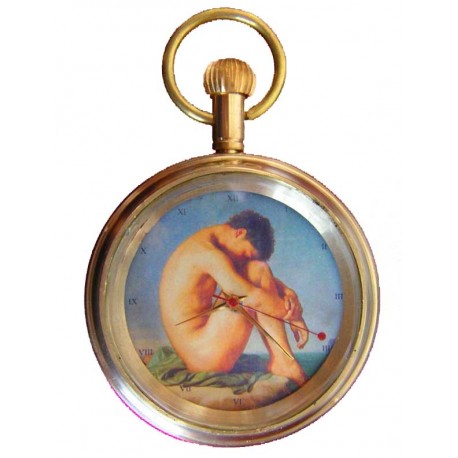 Homoeroticism refers to the sexual attraction between members of the same sex, either male–male or female–female. The concept differs from the concept of homosexuality: it refers specifically to the desire itself, which can be temporary, whereas "homosexuality" implies a more permanent state of identity or sexual orientation. It is a much older concept than the 19th century idea of homosexuality, and is depicted or manifested throughout the history of the visual arts and literature. It can also be found in performative forms; from theatre to the theatricality of uniformed movements (e.g., the Wandervogel and Gemeinschaft der Eigenen). According to Oxford English Dictionary, it's "pertaining to or characterized by a tendency for erotic emotions to be centered on a person of the same sex; or pertaining to a homo-erotic person."

This is a relatively recent dichotomy[4] that has been studied in the earliest times of ancient poetry to modern drama by modern scholars. Thus, scholars have analyzed the historical context in many homoerotic representations such as classical mythology, Renaissance literature,paintings and vase-paintings of ancient Greece and Ancient Roman pottery.

Though homoeroticism can differ from the interpersonal homoerotic — as a set of artistic and performative traditions, in which such feelings can be embodied in culture and thus expressed into the wider society — some authors have cited the influence of personal experiences in ancient authors such as Catullus, Tibullus and Propertius in their homoerotic poetry.

Arguments over classifications and labeling

The term "homoerotic" carries with it the weight of modern classifications of love and desire that may not have existed in previous eras. Homosexuality as we know it today was not fully codified until the mid-20th century, though this process began much earlier:

Following in the tradition of Michel Foucault, scholars such as Eve Kosofsky Sedgwick and David Halperin have argued that various Victorian public discourses, notably the psychiatric and the legal, fostered a designation or invention of the "homosexual" as a distinct category of individuals, a category solidified by the publications of sexologists such as Richard von Krafft-Ebing (1840–1902) and Havelock Ellis (1859–1939), sexologists who provided an almost-pathological interpretation of the phenomenon in rather Essentialist terms, an interpretation that led, before 1910, to hundreds of articles on the subject in The Netherlands, Germany, and elsewhere. One result of this burgeoning discourse was that the "homosexual" was often portrayed as a corrupter of the innocent, with a predisposition towards both depravity and paederasty—a necessary portrayal if Late-Victorian and Edwardian sexologists were to account for the continuing existence of the "paederast" in a world that had suddenly become bountiful in "homosexuals." (Kaylor, Secreted Desires, p. 33)

For Sigmund Freud, "rather than being a matter only for a minority of men who identify as homosexual or gay, homoeroticism is a part of the very formation of all men as human subjects and social actors."[7] Freud's point of view is embedded in his psychoanalytic studies on Narcissism and Oedipus complex.

Thomas Mann published an essay, "Über die Ehe" (On Marriage), written in 1925, where he states that homoeroticism is aesthetic, whileheterosexuality is prosaic.[8]

Notable examples in the visual arts

Male-male examples, in the visual fine arts, range through history: Ancient Greek vase art; Roman wine goblets (The Warren Cup). Several Italian Renaissance artists are thought to have been homosexual, and homoerotic appreciation of the male body has been identified by critics in works by Leonardo da Vinci and Michelangelo. More explicit sexual imagery occurring in the Mannerist and Tenebrist styles of the 16th and 17th centuries, especially in artists such as Agnolo Bronzino, Carlo Saraceni and Caravaggio, whose works were sometimes severely criticized by the Catholic Church.[9]

Many 19th century history paintings of classical characters such as Hyacinth, Ganymede and Narcissus can also be interpreted as homoerotic; the work of late 19th century artists (such as Thomas Eakins, Eugène Jansson, Henry Scott Tuke, Aubrey Beardsley and Magnus Enckell); through to the modern work of fine artists such as Paul Cadmusand Gilbert & George. Fine art photographers such as Wilhelm von Gloeden, David Hockney, Will McBride, Robert Mapplethorpe, Pierre et Gilles, Bernard Faucon, Anthony Goicolea have also made a strong contribution, Mapplethorpe and McBride being notably in breaking down barriers of gallery censorship and braving legal challenges. James Bidgood and Arthur Tress were also very important pioneers in the 1960s, radically moving homoerotic photography away from simple documentary and into areas that were more akin to fine-art surrealism. An example of lesbian erotica by Édouard-Henri Avril.

Female-female examples are most historically noticeable in the narrative arts: the archaic lyrics of Sappho; The Songs of Bilitis; novels such as those of Christa Winsloe, Colette, Radclyffe Hall, and Jane Rule, and films such as Mädchen in Uniform. More recently, lesbian homoeroticism has flowered in photography and the writing of authors such as Patrick Califia and Jeanette Winterson.

Female homoerotic art by lesbian artists has often been less culturally prominent than the presentation of lesbian eroticism by non-lesbians and for a primarily non-lesbian audience. In the west, this can be seen as long ago as the 1872 novelCarmilla, and is also seen in cinema in such popular films as Emmanuelle, The Hunger, Showgirls, and most of all inpornography. In the east, especially Japan, lesbianism is the subject of the manga subgenre yuri.

In many texts in the English-speaking world, lesbians have been presented as intensely sexual but also predatory and dangerous (the characters are often vampires) and the primacy of heterosexuality is usually re-asserted at the story's end. This shows the difference between homoeroticism as a product of the wider culture and homosexual art produced by gay men and women.

There is also a strong tradition of homoeroticism in poetry.

The most prominent example in the Western canon is that of the sonnets by William Shakespeare. Though some critics have made assertions, some in efforts to preserve Shakespeare's literary credibility, to its being non-erotic in nature, no critic has disputed that the majority of Shakespeare's sonnets concern explicitly male-male love poetry. The only other Renaissance artist writing in English to do this was the poet Richard Barnfield, who in The Affectionate Shepherd and Cynthia wrote fairly explicitly homoerotic poetry. Barnfield's poems, furthermore, are now widely accepted as a major influence upon Shakespeare's.

Elisar von Kupffer's Lieblingminne und Freundesliebe in der Weltlitteratur (1900) and Edward Carpenter's Ioläus: An Anthology of Friendship (1902) were the first known notable attempts at homoerotic anthologies since The Greek Anthology. Since then, many anthologies have been published.

In the female-female tradition, there are poets such as Sappho, "Michael Field", and Maureen Duffy. Emily Dickinson addressed a number of poems and letters with homoerotic overtones to her sister-in-law Susan Huntington Gilbert.

Letters can also be potent conveyors of homoerotic feelings; the letters between Virginia Woolf and Vita Sackville-West, two well-known members of the Bloomsbury Group, are full of homoerotic overtones characterized by this excerpt from Vita's letter to Virginia: "I am reduced to a thing that wants Virginia [...] It is incredible to me how essential you have become [...] I shan't make you love me any the more by giving myself away like this --But oh my dear, I can't be clever and stand-offish with you: I love you too much for that." (January 21, 1926)