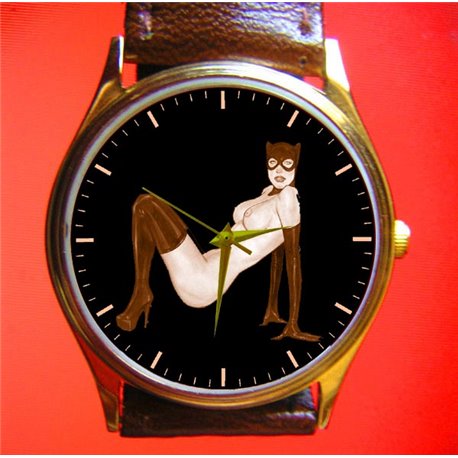 Catwoman is a fictional character associated with DC Comics' Batman franchise. Historically a supervillainess, the character was created by Bob Kane and Bill Finger, partially inspired by Kane's cousin, Ruth Steel.[2][3] Kane, a frequent movie goer, also mentioned that Jean Harlow was a model for the design.

The original and most widely known Catwoman, Selina Kyle, first appears in Batman #1 (Spring 1940) in which she is known as The Cat. She is an adversary of Batman, known for having a complex love-hate relationship with him. In her first appearance, she was a whip-carrying burglar with a taste for high-stake thefts.[4] For many years Catwoman thrived, but from September 1954 to November 1966 she took an extended hiatus due to the newly developing Comics Code Authority in 1954. These issues involved the rules regarding the development and portrayal of female characters that were in violation of the Comics Code.

Since the 1990s, Catwoman has been featured in an eponymous series that cast her as an antihero classy cat burglar rather than a villain. The character has been one of Batman's most enduring love interests.

A popular figure, Catwoman has been featured in most media adaptations related to Batman. Actresses Julie Newmar, Lee Meriwether, and Eartha Kitt introduced her to a large audience on the 1960s Batman television series and the 1966Batman motion picture. Michelle Pfeiffer portrayed the character in 1992's Batman Returns. Halle Berry starred in a stand-alone Catwoman film in 2004, which was a box-office flop, and bears little to no resemblance to the Batman character.Anne Hathaway portrayed Selina Kyle in The Dark Knight Rises.

Batman's creator, Bob Kane, was a great movie fan and his love for film provided the impetus for several Batman characters, among them, Catwoman. She was primarily inspired by Hedy Lamarr[citation needed] and partially inspired by 1930s film star Jean Harlow who at Kane's then-early and "impressionable age... seemed to personify feminine pulchritude at its most sensuous." Wanting to give his Batman comic books sex appeal and someone who could appeal to female readers as a female Batman, Kane and writer Bill Finger created a "friendly foe who committed crimes but was also a romantic interest in Batman's rather sterile life." She was meant to be a love interest and to engage Batman in a chess game with him trying to reform her. At the same time, this character was meant to be different from other Batman villains like the Joker in that she was never a killer or evil.

As for using cat imagery with their Catwoman, Kane states he and Finger saw cats as "kind of the antithesis of bats."

Catwoman, then called "the Cat", first appeared in Batman #1 as a mysterious burglar and jewel thief, revealed at the end of the story to be a young, attractive woman (unnamed in the first story), having disguised herself as an old woman during the story and been hired to commit a robbery. Although the story does not have her wearing her iconic cat-suit, it establishes her core personality as a femme fatale who both antagonizes and attracts Batman. It is implied Batman may have deliberately let her get away, by blocking Robin as he tried to leap after her. She next appears in Batman #2 in a story also involving the Joker but escapes Batman in the end. In Batman #3 she wears a fur mask and again succeeds in escaping Batman.

Batman #62 (December/January 1950) revealed that Catwoman is an amnesiac flight attendant who had turned to crime after suffering a prior blow to the head during a plane crash she survived. She reveals this after being hit on the head by a piece of rubble while saving Batman while he was chasing her. Although, in issue 197 of The Brave and the Bold, she admits that she made up the amnesia story because she wanted a way out of the past life of crime. She reforms for several years, helping out Batman in Batman #65 (June/July 1951) and #69 (February/March 1952), until she decides to return to a life of crime in Detective Comics #203 (January 1954), after a newspaper decides to publish stories of Batman's past adventures, and some crooks mock her about it. However in this story when Batman prevents a robbery and is knocked out by sleeping gas, Catwoman prevents her thugs from murdering him, though quickly claims she wants him as a hostage. Catwoman appears again as a criminal in Batman #84 (June 1954) and Detective Comics #211 (September 1954) for her final appearance until 1966. This was mostly due to her possible violation of the developing Comics Code Authority's rules for portrayal of female characters that started in 1954.

In the 1970s comics, a series of stories taking place on Earth-Two (the parallel Earth that was retroactively declared as the home of DC's Golden Age characters) reveal that on that world, Selina reformed in the 1950s (after the events of Batman #69) and had married Bruce Wayne; soon afterward, she gave birth to the couple's only child, Helena Wayne (the Huntress). The Brave and the Bold #197 (April 1983) elaborates upon the Golden Age origin of Catwoman given in Batman #62, after Selina reveals that she never actually had amnesia. It is revealed that Selina Kyle had been in an abusive marriage, and eventually decides to leave her husband. However, her husband keeps her jewelry in his private vault, and she has to break into it to retrieve it. Selina enjoys this experience so much she decides to become a professional costumed cat burglar, and thus begins a career that repeatedly leads to her encountering Batman.

The Earth-Two/Golden Age Selina Kyle eventually dies in the late 1970s after being blackmailed by a criminal into going into action again as Catwoman, as shown in DC Super-Stars #17 (November/December 1977).

Several stories in the 1970s featured Catwoman committing murder, something that neither the Earth-One nor Earth-Two versions of her would ever do. This version of Catwoman was assigned to the alternate world of Earth-B, an alternate Earth that included stories that could not be considered canonical on Earth-One or Earth-Two.

Catwoman's origin—and, to an extent, her character—was revised in 1987 when writer Frank Miller and artist David Mazzucchelli published Batman: Year One, a revision of Batman's origin. She works as a prostitute in order to survive and wants to break away from her abusive pimp (and former boyfriend). She witnesses his crimes and, because of an event that occurs to her sister, fears for her sister's life and begins to study self-defense and martial arts. Her teacher inspires Selina to become more than what she has been and she realizes that prostitution is no life for her, or for Holly.

Holly Robinson is a young runaway who idolizes Selina, but is much too young to be on the streets as far as Selina is concerned. Selina shares her home with Holly after she takes her in. As the story progresses Selina is led to a bit of burglary, she dons a catsuit costume that her now former pimp gave to her the day that she told him she was out of the business. After costuming herself so as not to be revealed, she gets a taste for burglary and begins to do it in more of a Robin Hood way than an actual thief. This is, however, how she runs into Batman. After a small confrontation, she begins to be inspired to stay in her costume and become the "Catwoman" after seeing Batman in action with others. Selina gets the idea that, if there is a "bat", why can there not be a "cat"?

The 1989 Catwoman limited series, written by Mindy Newell and with art by J.J. Birch, expanded upon Miller's Year One origin. This storyline, known as "Her Sister's Keeper", explores Selina's early life as a prostitute and the start of her career as Catwoman. The story culminates with Selina's former pimp, Stan, abducting and violently abusing her sister Maggie, who, in contrast to Selina, is a nun. Selina kills Stan to save her sister, and gets away with it. Most of this is revealed in the former series, but is expanded upon in "Her Sister's Keeper".

Catwoman (vol. 2) #69, which provides details about Selina's childhood, neglects Maggie's existence. Maria Kyle is a distant parent who preferred to spend her time with cats, and commits suicide when Selina is very young. Her alcoholic father, Brian, is cold to Selina for resembling her mother (whom he resents for dying), and eventually drinks himself to death. To survive, Selina takes to the streets for a time before getting caught and sent first to an orphanage, then juvenile hall, "where Selina began to see how hard the world could really be." Maggie's fate at this point in the time-line is not alluded to. However, when Ed Brubaker reintroduces her into the comic, he implies that Maggie may have directly entered an orphanage and promptly been adopted.

When she is 13, Selina discovers that the hall's administrator has been embezzling funds, and she confronts her. In an attempt to cover up her crime, the administrator puts Selina in a bag and drops her in a river to drown (like a cat). She escapes and returns to the orphanage, where she steals documents exposing the administrator's corruption. She uses these to blackmail the administrator into erasing "Selina Kyle" from the city's records, then steals the administrator's diamond necklace and escapes the orphanage.[15] Selina eventually finds herself in "Alleytown - a network of cobblestone streets that form a small borough between the East End and Old Gotham."[17] Selina is taken in by Mama Fortuna, the elderly leader of a gang of young thieves, and is taught how to steal. Fortuna treats her students like slaves, keeping their earnings for herself. Selina eventually runs away, accompanied by her friend Sylvia. However, the two have difficulty surviving on their own, and in desperation try to support themselves by working as prostitutes. The two drift apart afterward, with Sylvia coming to resent Selina for not inquiring about what had happened to her at the hands of her abusive first client.

Batman: Dark Victory, the sequel to The Long Halloween, implies that Catwoman suspects she is the illegitimate daughter of mafia boss Carmine Falcone, although she finds no definitive proof. Selina's connection to the Falcone family is further explored in the miniseries Catwoman: When in Rome. Though the story adds more circumstantial evidence to the theory of Selina's Falcone heritage, establishing that the Falcones' secondborn daughter was put up for adoption in America, it also supplies no definitive proof. During The Long Halloween, Selina (out of costume) develops a relationship with Bruce Wayne, even leading her to save Bruce from Poison Ivy. However, this relationship appears to end on the Fourth of July when Bruce rejects her advances twice—once as Bruce, and once as Batman. She leaves him for good and also leaves Gotham for a while in Batman: Dark Victory, after he stands her up on two holidays. When the two meet at an opera many years later, during the events of Hush, Bruce comments that the two no longer have a relationship as Bruce and Selina.

Catwoman also appears in the Batman: Knightfall saga, where she is approached by Bane's henchmen while robbing a house. Bane asks her to work for him, but she refuses, as she is repulsed by the criminal who "broke" Batman. Later in the story, she boards a plane with Bruce Wayne to fly to Santa Prisca. She next appears in the Batman: Knightquest saga, where Azrael is masquerading as Batman. She is one of the few to recognize that Batman is an impostor, later being present when the true Batman returns to the fold as he struggles against his successor, his willingness to save even criminals confirming his true identity for Selina.

29 other products in the same category: