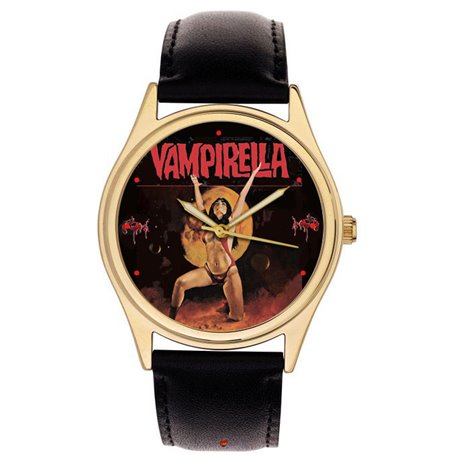 Vampirella was originally presented as an inhabitant of the planet Drakulon, a world where a vampiric race lived on blood and where blood flowed in rivers. Draculon orbits twin suns that were causing droughts across the planet, marking certain doom for Vampirella and her race. The race of which Vampirella was born, the Vampiri, were able to transform themselves into bats at will, possessed superhuman physical attributes, sprout wings when required to fly, and drink blood.

The story begins with the inhabitants of Drakulon dying slowly due to the drying up of its blood. The last few lie dying when a spaceship from Earth crashes on the planet. Vampirella, sent to investigate, is attacked; retaliating, she discovers that the astronauts have blood in their veins. In order for her race to survive, she manages to pilot the ship back to Earth where her adventures begin. Vampirella becomes a "good" vampire, and devotes her energy to ridding our world of the homegrown "evil" kind.

Harris Comics revived Vampirella in the miniseries Morning In America, written by Kurt Busiek. Soon thereafter, Vampirella was established as being brainwashed by her sister and brother (in the story "Mystery Walk") and led to believe she was from the planet Drakulon. She learned that she was, in fact, the daughter of Lilith, whom popular medieval Jewish lore depicts as the first wife of Adam. Lilith, being created from the same elements as Adam, was equal and would not submit before him and was cast out of Eden by God. She mated with demons in Hell, giving birth to vampires who would kill the offspring of Adam and Eve on Earth. Later, she sought redemption from God and gave birth to Vampirella, whom she sent to Earth to kill all evil vampires. According to this account, Drakulon was a part of Hell where Lilith and her progeny lived and ruled.

The heroine is a vampire, since she is the daughter of Lilith and needs blood to survive and has many of the typical vampiric powers, including superhuman physical abilities, shapeshifting into a bat, immortality, and a mesmeric stare. She is not prone to the race's traditional weaknesses, such as daylight, holy water, garlic, or crosses. She does not attack people to drink their blood, except occasionally when she herself is attacked or desires to kill or turn someone into a vampire. She is almost always scantily clad in her signature red sling suit with a white collar and wearing shiny black knee-high boots.

A blind, psychic vampire hunter. He was pursuing Dracula and initially tried to destroy Vampirella, believing her to be kin to that vampire lord.

Conrad's son, and the last of a long line of vampire hunters, he followed his father's steps and became a paranormal researcher. He is portrayed as more open-minded than his father. He believed Vampirella was not evil, and eventually they fell in love. Vampirella has often helped Adam in his research. Adam was killed in Vengeance of Vampirella #25 by Mistress Nyx.

A physician who rescued Vampirella after a plane crash. Due to the injuries she sustained, he had to amputate her wings and was able to create a substitute blood serum that keeps Vampirella's thirst under control.

A former sorcerer, now a sideshow magician. Vampirella calls him "Pendy dearest" and treats him as she would a kindly old uncle. While occasionally his knowledge of magic is useful to her, Pendragon is often a liability. In the Warren stories they often travel together, seeking out evil-doers, but Pendragon is generally depicted as getting lost, getting drunk, falling asleep, or otherwise fumbling at a critical moment, thus causing a crisis. Vampirella is deeply loyal to him, however; he is the only real family she has.

Formerly the Whore of Babylon, her spirit became infused with a Queen of Hearts playing card. Whenever a woman touches the card, she magically becomes this topless serial killer. Originally the Queen wanted to marry the mad-god Chaos, and she needed a dowry of seven human hearts. Vampirella's heart was to have been the last, but the Queen's demon lost his eyes and tore the Queen's out in anger. The Queen later cut out Vampirella's eyes in revenge, but the former was killed by the same demon and the latter had her eyes restored by a space doctor. The Queen's "sister," actually another woman possessed by the card, had an incubus kill six women for their hearts and planned to have Vampirella become the bride of Chaos. She then killed the incubus and used his heart to summon Chaos. But his spilled blood drove Vampirella into a feeding frenzy and she broke her bonds. She drank much of the Queen's blood, and then threw her into the mad-god's giant hand. He then took the latest Queen to his hellish dimension. The Queen later possessed Vampirella and her friends in the Queen's Gambit story arc.

Evil brother and sister of Vampirella, who planted false memories of the planet Drakulon in Vampirella's mind. Vampirella also has a blonde twin sister, Draculina, who appeared only once, in Vampirella #2.

The demon who tempted Vampirella with her true origin in order to gain access to Earth.

A former Prussian World War I officer, now a lich, who won his state of immortality in a card game with Satan, but at the price of steadily decaying alive. A cruel and sadistic mastermind, with a special victim preference in children.[10]

The daughter of a liaison between the mad-god Chaos and Lucrezia Borgia.[11] A demonic persona, who is bent on destroying Vampirella.

One of two daughters of a Mafioso boss whom she was forced to kill by von Kreist; her twin sister Trixie was turned into a vampire by von Kreist's minions. Vampirella took the orphaned girl under her wing and trained her in combating vampires.

Initially, alien shapeshifter from Vampirella's native planet who can morph into a black panther. She is generally portrayed as more violent and feral than Vampirella. Later stories rewrote her origin to that of an ancient Egyptian cursed by the gods because of a murderous spree. She is cursed to live forever, with periods where she does not know who or what she is.

Vampirella's mother and the first woman created by God. Her story is told in the alternate version of the events of Genesis, she was the first wife of Adam, and the mother of demons. She sent her daughter to Earth to atone for her mistakes. Vampirella Revelations #0-3 (see Bibliography) revealed a more sinister side to her.

Vampirella possesses many of the typical powers of mythological vampires. She exerts super-strength when facing her opponents and can move so fast that she appears as a blur of motion.[12][13] Her senses are far beyond those of humans, allowing her to tell ones emotional state through their scent, hear things imperceptible to humans, and see clearly in total darkness. She is very athletic, possessing great stamina, relfexes, and agility beyond that of humans. Her healing factor grants her great resilience and allows her to heal rapidly from her wounds and makes her immune to Earthly illness and toxins, with the exception of garlic.

Her bite can turn humans into vampires. She has the power to grow a giant pair of chiropteran wings to allow self-propelled flight. Her stare and even voice are hypnotic and seductive to humans, particularly males (she has been seen as having the ability to induce sexual arousal in men simply by being in their presence). She is shown to have the power of telepathy as she was able to hear the voices of demons inside Jackie Estacado's mind.

In addition to her supernatural abilities, Vampirella is a formidable hand-to-hand combatant and is shown to be skilled with modern-day firearms