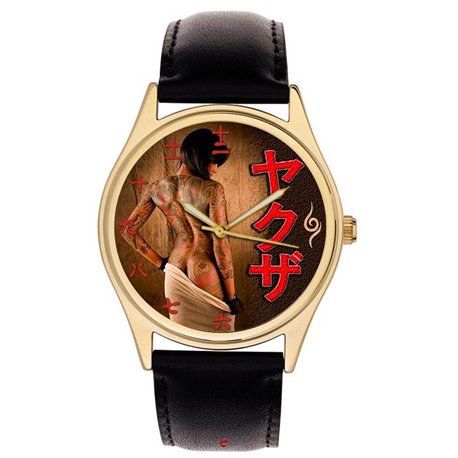 Yakuza (ヤクザ?, [jaꜜkuza]), also known asgokudō (極道?), are members of transnational organized crime syndicates originating inJapan. The Japanese police, and media by request of the police, call them bōryokudan(暴力団?, "violent groups"), while the yakuza call themselves "ninkyō dantai" (任侠団体 or 仁侠団体?, "chivalrous organizations"). The yakuza are notorious for their strict codes of conduct and organized fiefdom-nature. They have a large presence in the Japanese media and operate internationally with an estimated 102,000 members.

Despite uncertainty about the single origin of yakuza organizations, most modern yakuza derive from two classifications which emerged in the mid-Edo period (1603–1868): tekiya, those who primarily peddled illicit, stolen or shoddy goods; and bakuto, those who were involved in or participated in gambling.[3]

"Tekiya" (peddlers) were considered one of the lowest social groups in Edo. As they began to form organizations of their own, they took over some administrative duties relating to commerce, such as stall allocation and protection of their commercial activities. During Shintofestivals, these peddlers opened stalls and some members were hired to act as security. Each peddler paid rent in exchange for a stall assignment and protection during the fair. 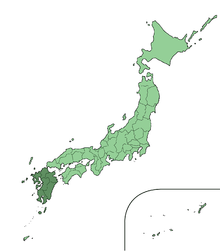 Throughout history, especially since the modern era, Kyushu island has been the largest source of yakuza members, including many renowned bosses in theYamaguchi-gumi. Isokichi Yoshida (1867–1936) was from the Kitakyushu area and considered the first renowned modern yakuza. RecentlyShinobu Tsukasa and Kunio Inoue, the bosses of the two most powerful clans in the Yamaguchi-gumi, are from Kyushu. Fukuoka, the northernmost part of the island, has the largest number ofdesignated syndicates among all of the prefectures.

The Edo government eventually formally recognized such tekiya organizations and granted the oyabun (leaders) of tekiya a surname as well as permission to carry a sword[citation needed]—the wakizashi, or short samurai sword (the right to carry the katana, or full-sized samurai swords, remained the exclusive right of the nobility and samurai castes). This was a major step forward for the traders, as formerly only samurai and noblemen were allowed to carry swords.

Bakuto (gamblers) had a much lower social standing even than traders, as gambling was illegal. Many small gambling houses cropped up in abandoned temples or shrines at the edge of towns and villages all over Japan. Most of these gambling houses ran loan sharking businesses for clients, and they usually maintained their own security personnel. The places themselves, as well as the bakuto, were regarded with disdain by society at large, and much of the undesirable image of the yakuza originates from bakuto; this includes the name yakuza itself (ya-ku-za, or 8-9-3, is a losing hand in Oicho-Kabu, a form of Baccarat).

Because of the economic situation during the mid-period and the predominance of the merchant class, developing yakuza groups were composed of misfits and delinquents that had joined or formed yakuza groups to extort customers in local markets by selling fake or shoddy goods.[3][clarification needed]

The roots of the yakuza can still be seen today in initiation ceremonies, which incorporate tekiya or bakuto rituals. Although the modern yakuza has diversified, some gangs still identify with one group or the other; for example, a gang whose primary source of income is illegal gambling may refer to themselves as bakuto. 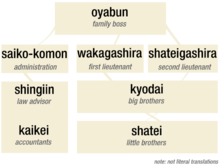 During the formation of the yakuza, they adopted the traditional Japanese hierarchical structure of oyabun-kobun where kobun (子分; lit. foster child) owe their allegiance to the oyabun (親分?, lit. foster parent). In a much later period, the code of jingi (仁義?, justice and duty) was developed where loyalty and respect are a way of life.

The oyabun-kobun relationship is formalized by ceremonial sharing of sake from a single cup. This ritual is not exclusive to the yakuza—it is also commonly performed in traditional Japanese Shinto weddings, and may have been a part of sworn brotherhood relationships.[4]

During the World War II period in Japan, the more traditional tekiya/bakuto form of organization declined as the entire population was mobilised to participate in the war effort and society came under strict military government. However, after the war, the yakuza adapted again.

Prospective yakuza come from all walks of life. The most romantic tales tell how yakuza accept sons who have been abandoned or exiled by their parents. Many yakuza start out in junior high school or high school as common street thugs or members of bōsōzoku gangs. Perhaps because of its lower socio-economic status, numerous yakuza members come fromBurakumin and ethnic Korean backgrounds.

Yakuza groups are headed by an oyabun or kumichō (組長?, family head) who gives orders to his subordinates, the kobun. In this respect, the organization is a variation of the traditional Japanese senpai-kōhai (senior-junior) model. Members of yakuza gangs cut their family ties and transfer their loyalty to the gang boss. They refer to each other as family members - fathers and elder and younger brothers. The yakuza is populated almost entirely by men, and there are very few women involved who are called ane-san (姐さん?, older sister). When the 3rd Yamaguchi-gumi boss (Kazuo Taoka) died in the early 1980s, his wife (Fumiko) took over as boss of Yamaguchi-gumi, albeit for a short time.

Yakuza have a complex organizational structure. There is an overall boss of the syndicate, thekumicho, and directly beneath him are the saiko komon (senior advisor) and so-honbucho(headquarters chief). The second in the chain of command is the wakagashira, who governs several gangs in a region with the help of a fuku-honbucho who is himself responsible for several gangs. The regional gangs themselves are governed by their local boss, theshateigashira.[5]

Each member's connection is ranked by the hierarchy of sakazuki (sake sharing). Kumicho are at the top, and control various saikō-komon (最高顧問?, senior advisors). The saikō-komon control their own turfs in different areas or cities. They have their own underlings, including other underbosses, advisors, accountants and enforcers.

Those who have received sake from oyabun are part of the immediate family and ranked in terms of elder or younger brothers. However, each kobun, in turn, can offer sakazuki as oyabun to his underling to form an affiliated organisation, which might in turn form lower ranked organizations. In the Yamaguchi-gumi, which controls some 2,500 businesses and 500 yakuza groups, there are fifth rank subsidiary organizations.

Yubitsume, or the cutting off of one's finger, is a form of penance or apology. Upon a first offense, the transgressor must cut off the tip of his left little finger and give the severed portion to his boss. Sometimes an underboss may do this in penance to the oyabun if he wants to spare a member of his own gang from further retaliation.

Its origin stems from the traditional way of holding a Japanese sword. The bottom three fingers of each hand are used to grip the sword tightly, with the thumb and index fingers slightly loose. The removal of digits starting with the little finger moving up the hand to the index finger progressively weakens a person's sword grip.

The idea is that a person with a weak sword grip then has to rely more on the group for protection—reducing individual action. In recent years, prosthetic fingertips have been developed to disguise this distinctive appearance.[4]

An early example of Irezumitattoos, 1870s.

Many yakuza have full-body tattoos (including their genitalia). These tattoos, known as irezumi in Japan, are still often "hand-poked", that is, the ink is inserted beneath the skin using non-electrical, hand-made and handheld tools with needles of sharpened bamboo or steel. The procedure is expensive, painful, and can take years to complete.[6]

When yakuza members play Oicho-Kabu cards with each other, they often remove their shirts or open them up and drape them around their waists. This enables them to display their full-body tattoos to each other. This is one of the few times that yakuza members display their tattoos to others, as they normally keep them concealed in public with long-sleeved and high-necked shirts. When new members join, they are often required to remove their trousers as well and reveal any lower body tattoos.

29 other products in the same category: