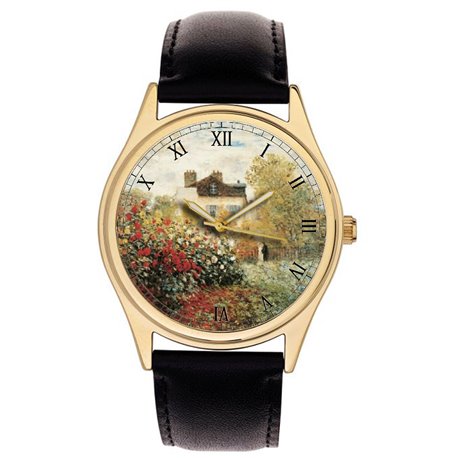 Oscar-Claude Monet (UK: /ˈmɒneɪ/, US: /moʊˈneɪ/,[1][2] French: [klod mɔnɛ]; 14 November 1840 – 5 December 1926) was a French painter, a founder of French Impressionist painting and the most consistent and prolific practitioner of the movement's philosophy of expressing one's perceptions before nature, especially as applied to plein air landscape painting.[3][4] The term "Impressionism" is derived from the title of his painting Impression, soleil levant (Impression, Sunrise), which was exhibited in 1874 in the first of the independent exhibitions mounted by Monet and his associates as an alternative to the Salon de Paris.[5]

Monet's ambition of documenting the French countryside led him to adopt a method of painting the same scene many times in order to capture the changing of light and the passing of the seasons.[6] From 1883, Monet lived in Giverny, where he purchased a house and property and began a vast landscaping project which included lily ponds that would become the subjects of his best-known works. He began painting the water lilies in 1899, first in vertical views with a Japanese bridge as a central feature and later in the series of large-scale paintings that was to occupy him continuously for the next 20 years of his life.

Claude Monet was born on 14 November 1840 on the fifth floor of 45 rue Laffitte, in the 9th arrondissement of Paris.[7] He was the second son of Claude Adolphe Monet and Louise Justine Aubrée Monet, both of them second-generation Parisians. On 20 May 1841, he was baptized in the local parish church, Notre-Dame-de-Lorette, as Oscar-Claude, but his parents called him simply Oscar.[7][8] (He signed his juvenilia "O. Monet".) Despite being baptized Catholic, Monet later became an atheist.[9][10]

In 1845, his family moved to Le Havre in Normandy. His father wanted him to go into the family's ship-chandling and grocery business,[11] but Monet wanted to become an artist. His mother was a singer, and supported Monet's desire for a career in art.[12]

On 1 April 1851, Monet entered Le Havre secondary school of the arts. Locals knew him well for his charcoal caricatures, which he would sell for ten to twenty francs. Monet also undertook his first drawing lessons from Jacques-François Ochard, a former student of Jacques-Louis David. On the beaches of Normandy around 1856 he met fellow artist Eugène Boudin, who became his mentor and taught him to use oil paints. Boudin taught Monet "en plein air" (outdoor) techniques for painting.[13] Both were influenced by Johan Barthold Jongkind.

On 28 January 1857, his mother died. At the age of sixteen, he left school and went to live with his widowed, childless aunt, Marie-Jeanne Lecadre. 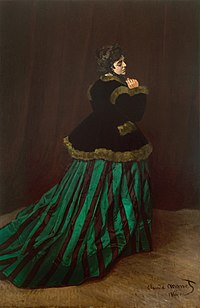 The Woman in the Green Dress, Camille Doncieux, 1866, Kunsthalle Bremen

When Monet traveled to Paris to visit the Louvre, he witnessed painters copying from the old masters. Having brought his paints and other tools with him, he would instead go and sit by a window and paint what he saw.[14] Monet was in Paris for several years and met other young painters, including Édouard Manet and others who would become friends and fellow Impressionists.

After drawing a low ballot number in March 1861, Monet was drafted into the First Regiment of African Light Cavalry (Chasseurs d'Afrique) in Algeria for a seven-year period of military service. His prosperous father could have purchased Monet's exemption from conscription but declined to do so when his son refused to give up painting. While in Algeria, Monet did only a few sketches of casbah scenes, a single landscape, and several portraits of officers, all of which have been lost. In a Le Temps interview of 1900 however he commented that the light and vivid colours of North Africa "contained the germ of my future researches".[15] After about a year of garrison duty in Algiers, Monet contracted typhoid fever and briefly went absent without leave. Following convalescence, Monet's aunt intervened to remove him from the army if he agreed to complete a course at an art school. It is possible that the Dutch painter Johan Barthold Jongkind, whom Monet knew, may have prompted his aunt on this matter.

Disillusioned with the traditional art taught at art schools, in 1862 Monet became a student of Charles Gleyre in Paris, where he met Pierre-Auguste Renoir, Frédéric Bazille and Alfred Sisley. Together they shared new approaches to art, painting the effects of light en plein air with broken colour and rapid brushstrokes, in what later came to be known as Impressionism. 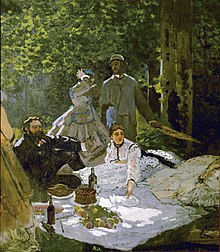 In January 1865 Monet was working on a version of Le déjeuner sur l'herbe, aiming to present it for hanging at the Salon, which had rejected Manet's Le déjeuner sur l'herbe two years earlier.[17] Monet's painting was very large and could not be completed in time. (It was later cut up, with parts now in different galleries.) Monet submitted instead a painting of Camille or The Woman in the Green Dress (La femme à la robe verte), one of many works using his future wife, Camille Doncieux, as his model. Both this painting and a small landscape were hung.[17] The following year Monet used Camille for his model in Women in the Garden, and On the Bank of the Seine, Bennecourt in 1868. Camille became pregnant and gave birth to their first child, Jean, in 1867.[18] Monet and Camille married on 28 June 1870, just before the outbreak of the Franco-Prussian War,[19] and, after their excursion to London and Zaandam, they moved to Argenteuil, in December 1871. During this time Monet painted various works of modern life. He and Camille lived in poverty for most of this period. Following the successful exhibition of some maritime paintings, and the winning of a silver medal at Le Havre, Monet's paintings were seized by creditors, from whom they were bought back by a shipping merchant, Gaudibert, who was also a patron of Boudin.[17] 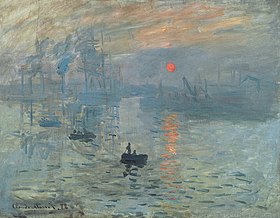 From the late 1860s, Monet and other like-minded artists met with rejection from the conservative Académie des Beaux-Arts, which held its annual exhibition at the Salon de Paris. During the latter part of 1873, Monet, Pierre-Auguste Renoir, Camille Pissarro, and Alfred Sisley organized the Société anonyme des artistes peintres, sculpteurs et graveurs (Anonymous Society of Painters, Sculptors, and Engravers) to exhibit their artworks independently. At their first exhibition, held in April 1874, Monet exhibited the work that was to give the group its lasting name. He was inspired by the style and subject matter of previous modern painters Camille Pissarro and Edouard Manet.[20]

Impression, Sunrise was painted in 1872, depicting a Le Havre port landscape. From the painting's title the art critic Louis Leroy, in his review, "L'Exposition des Impressionnistes," which appeared in Le Charivari, coined the term "Impressionism".[21] It was intended as disparagement but the Impressionists appropriated the term for themselves.[22][23]

After the outbreak of the Franco-Prussian War (19 July 1870), Monet and his family took refuge in England in September 1870,[24] where he studied the works of John Constable and Joseph Mallord William Turner, both of whose landscapes would serve to inspire Monet's innovations in the study of colour. In the spring of 1871, Monet's works were refused authorisation for inclusion in the Royal Academy exhibition.[19]

In May 1871, he left London to live in Zaandam, in the Netherlands,[19] where he made twenty-five paintings (and the police suspected him of revolutionary activities).[25] He also paid a first visit to nearby Amsterdam. In October or November 1871, he returned to France. From December 1871 to 1878 he lived at Argenteuil, a village on the right bank of the Seine river near Paris, and a popular Sunday-outing destination for Parisians, where he painted some of his best-known works. In 1873, Monet purchased a small boat equipped to be used as a floating studio.[26] From the boat studio Monet painted landscapes and also portraits of Édouard Manet and his wife; Manet in turn depicted Monet painting aboard the boat, accompanied by Camille, in 1874.[26] In 1874, he briefly returned to Holland.[27] 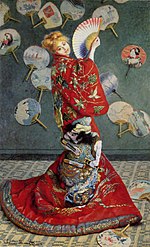 The first Impressionist exhibition was held in 1874 at 35 boulevard des Capucines, Paris, from 15 April to 15 May. The primary purpose of the participants was not so much to promote a new style, but to free themselves from the constraints of the Salon de Paris. The exhibition, open to anyone prepared to pay 60 francs, gave artists the opportunity to show their work without the interference of a jury.[28][29][30]

Renoir chaired the hanging committee and did most of the work himself, as others members failed to present themselves.[28][29]

In addition to Impression: Sunrise (pictured above), Monet presented four oil paintings and seven pastels. Among the paintings he displayed was The Luncheon (1868), which features Camille Doncieux and Jean Monet, and which had been rejected by the Paris Salon of 1870.[31] Also in this exhibition was a painting titled Boulevard des Capucines, a painting of the boulevard done from the photographer Nadar's apartment at no. 35. Monet painted the subject twice, and it is uncertain which of the two pictures, that now in the Pushkin Museum in Moscow, or that in the Nelson-Atkins Museum of Art in Kansas City, was the painting that appeared in the groundbreaking 1874 exhibition, though more recently the Moscow picture has been favoured.[32][33] Altogether, 165 works were exhibited in the exhibition, including 4 oils, 2 pastels and 3 watercolours by Morisot; 6 oils and 1 pastel by Renoir; 10 works by Degas; 5 by Pissarro; 3 by Cézanne; and 3 by Guillaumin. Several works were on loan, including Cézanne's Modern Olympia, Morisot's Hide and Seek (owned by Manet) and 2 landscapes by Sisley that had been purchased by Durand-Ruel.[28][29][30]

The total attendance is estimated at 3500, and some works did sell, though some exhibitors had placed their prices too high. Pissarro was asking 1000 francs for The Orchard and Monet the same for Impression: Sunrise, neither of which sold. Renoir failed to obtain the 500 francs he was asking for La Loge, but later sold it for 450 francs to Père Martin, dealer and supporter of the group.[28][29][30]

19 other products in the same category: