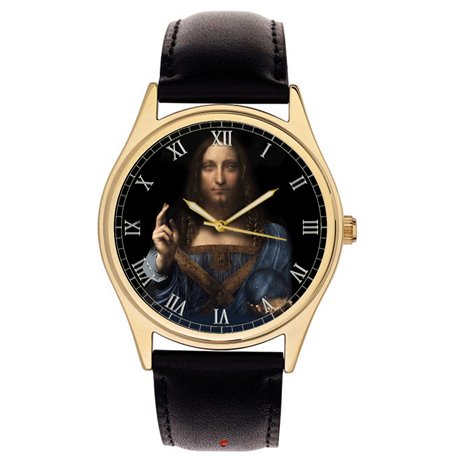 Salvator Mundi is a painting of Christ as Salvator Mundi (Latin for Savior of the World) by Italian artist Leonardo da Vinci, dated to c. 1500. The painting shows Jesus, in Renaissance dress, giving a benediction with his right hand raised and two fingers extended, while holding a transparent rock crystal orb in his left hand, signaling his role as savior of the world and master of the cosmos, and representing the 'crystalline sphere' of the heavens, as it was perceived during the Renaissance.[1][2] Around 20 other versions of the work are known, by students and followers of Leonardo. Preparatory chalk and ink drawings of the drapery by Leonardo are held in the Royal Collection.

Long thought to be a copy of a lost original, veiled with overpainting, it was restored, rediscovered, and included in a major Leonardo exhibition at theNational Gallery, London, in 2011–12. Although several leading scholars consider it to be an original work by Leonardo da Vinci,[3] this attribution has been disputed by other specialists.[4]

It is one of fewer than 20 known works by Leonardo, and was the only one to remain in private hands. It was sold at auction by Christie's in New York to Prince Badr bin Abdullah bin Mohammed Al Farhan[5] on behalf of the Abu Dhabi Department of Culture & Tourism on 15 November 2017, for $450.3 million, setting a new record for most expensive painting ever sold.[6][7] The painting is to be on display at the Louvre Abu Dhabi.

Leonardo da Vinci's Salvator Mundi may have been painted for Louis XII of France and his consort, Anne of Brittany.[8] It was probably commissioned around 1500, shortly after Louis conquered the Duchy of Milan and took control of Genoa in the Second Italian War. Leonardo himself moved from Milan to Florence in 1500.[9][10]

It may have come to England with Henrietta Maria when she married Charles I of England in 1625, and it seems to have remained in her private chambers at theQueen's House in Greenwich. Wenceslaus Hollar made an engraving of the painting, published in Antwerp in 1650 with the inscription Leonardus da Vinci pinxit (Latin for 'Leonardo da Vinci painted it').[9]

Charles I was executed in 1649 at the end of the English Civil War, and the painting was included in a 1649 inventory of the Royal Collection, valued at £30. Charles’s possessions were sold under the English Commonwealth, and the painting was sold in 1651 to John Stone, a mason, to settle a debt, but it was returned to Charles II of England after the English Restoration in 1660, and included in an inventory of Charles’s possessions at the Palace of Whitehall in 1666. It was inherited by James II of England and may then have passed to his mistress Catherine Sedley, Countess of Dorchester, whose illegitimate daughter with James became the third wife of John Sheffield, 1st Duke of Buckingham and Normanby. His own illegitimate son, Sir Charles Herbert Sheffield, 1st Baronet, auctioned the painting in 1763 along with other artworks from Buckingham House, when the building was sold to George III.

The painting then disappeared from the records until it was bought by a British collector, Francis Cook, 1st Viscount of Monserrate, in 1900, for his collection at Doughty House in Richmond. The painting was damaged from previous restoration attempts, and has been attributed to a follower of Leonardo, Bernardino Luini. Cook's great grandson, Sir Francis Cook, 4th Baronet, sold it at auction in 1958 for £45,[2] as a work by Leonardo's pupil Giovanni Antonio Boltraffio.[11]The painting remained attributed to Boltraffio until 2011.[11]

In 2005, the painting was acquired for less than $10,000 (€8,450) at an auction in New Orleans by a consortium of art dealers that included Robert Simon, a specialist in Old Masters.[12][13] It had been heavily overpainted so it looked like a copy, and was, before restoration, described as "a wreck, dark and gloomy".[14]

The consortium believed there was a possibility that the low quality mess (with its excessive overpainting) might actually be the long missing da Vinci original. They spent the next few years having the painting restored by Dianne Dwyer Modestini at New York University and authenticated as a painting by Leonardo.[13][14] From November 2011 through February 2012, the painting was exhibited at the National Gallery as a work by Leonardo da Vinci.[13][15][a]

In May 2013, the Swiss dealer Yves Bouvier purchased the painting for just over US$75 million (in a private sale brokered by Sotheby’s, New York). The painting was then sold to Russian collector Dmitry Rybolovlev for US$127.5 million.[17][18][19]This sale—along with several other sales Bouvier made to Rybolovlev—created a legal dispute between Rybolovlev and Bouvier.[20]

It was exhibited in Hong Kong, London, San Francisco and New York in 2017, and then sold at auction at Christie's in New York on 15 November 2017 for $450,312,500, a new record price for an artwork (hammer price $400 million plus $50.3 million in fees).[21][22] The purchaser was identified as Saudi Arabian prince Badr bin Abdullah.[5][23] In December 2017, the Wall Street Journal reported that Prince Bader was in fact an intermediary for Crown Prince Mohammed bin Salman, the true buyer.[24] However, Christie's confirmed that Prince Bader acted on behalf of Abu Dhabi’s Department of Culture and Tourism for display at the Louvre Abu Dhabi.[6][b] 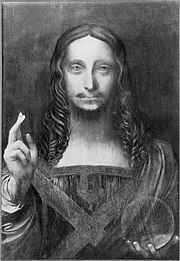 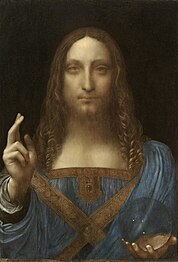 In 2011, by consensus decision, facilitated by National Gallery director Nicholas Penny, the attribution of Leonardo da Vinci was confirmed.[11] By July 2011, separate press release documents were issued by the owners' publicity representative and the National Gallery, officially announcing the "new discovery".[11][28]

Once it was cleaned and restored, the painting was compared with, and found superior to, twenty other versions of Salvator Mundi. It was exhibited by London'sNational Gallery during the Leonardo da Vinci: Painter at the Court of Milan from November 2011 to February 2012.[9][14][29][30] Several features in the painting have led to the positive attribution: a number of pentimenti are evident, most notably the position of the right thumb. Thesfumato effect of the face—evidently achieved in part by manipulating the paint using the heel of the hand—is typical of many Leonardo works.[31] The way the ringlets of hair and the knotwork across the stole have been handled is also seen as indicative of Leonardo's style. Furthermore, the pigments and the walnut panel upon which the work was executed are consistent with other Leonardo paintings.[32] Additionally, the hands in the painting are very detailed, something that Leonardo is known for: he would dissect the limbs of the deceased in order to study them and render body parts in an extremely lifelike manner.[33]

One of the world's leading Leonardo experts, Martin Kemp,[34][35] who helped authenticate the work, said that he knew immediately upon first viewing the restored painting that it was the work of Leonardo: "It had that kind of presence that Leonardos have ... that uncanny strangeness that the later Leonardo paintings manifest." Of the better-preserved parts, such as the hair, Kemp notes: "It's got that kind of uncanny vortex, as if the hair is a living, moving substance, or like water, which is what Leonardo said hair was like."[31]

However skilled Leonardo's followers and imitators might have been, none of them reached out into such realms of "philosophical and subtle speculation". We cannot reasonably doubt that here, we are in the presence of the painter from Vinci.[36]

Walter Isaacson in his biography of Leonardo wrote that the orb that Christ is holding does not correspond to the way an orb would realistically look:

In one respect, it is rendered with beautiful scientific precision, but Leonardo failed to paint the distortion that would occur when looking through a solid clear orb at objects that are not touching the orb. Solid glass or crystal, whether shaped like an orb or a lens, produces magnified, inverted, and reversed images. Instead, Leonardo painted the orb as if it were a hollow glass bubble that does not refract or distort the light passing through it.[37]

Isaacson believes that this was "a conscious decision on Leonardo's part",[38] and speculates that either Leonardo felt a more accurate portrayal would be distracting, or "he was subtly trying to impart a miraculous quality to Christ and his orb".[37] 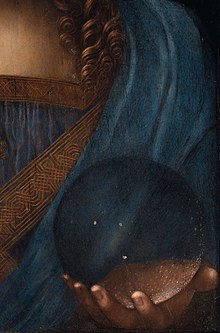 Detail of the left hand and crystal orb

Kemp, on the other hand, says the doubled outline of the heel of the hand holding the sphere—which the restorer described as a pentimento—is an accurate rendering of the refraction produced by a calcite (or rock crystal) sphere.[31] Kemp further notes evidence supporting the solid nature of the orb, citing "sparkles with a series of internal inclusions (or pockets of air)" visible in 'within' the orb.[1] Kemp notes the double refraction is typical of the type produced by a transparent calcite sphere. None of the copyists had likely noticed or reproduced this crystalline orb with a double refraction.[31]

Other versions or copies of Salvator Mundi often portray a brass, solid spherical orb, terrestrial globe, or globus cruciger. Occasionally, they appear to be made of translucent glass, or show landscapes within them. Leonardo's painting, Kemp says, has "an amazing series of glistening little apertures—they're like bubbles, but they're not round—painted very delicately, with just a touch of impasto, a touch of dark, and these little sort of glistening things, particularly around the part where you get the back reflections." These are the characteristic features of rock crystal. Leonardo was an avid expert on rock crystal. He had been asked to evaluate vases that Isabella d'Este had thought of purchasing, and greatly admired the properties of the mineral.[31] (Isabella d’Este has been proposed as a plausible candidate for the subject of Leonardo’s Mona Lisa).[39]

Iconographically, the crystal sphere relates to the heavens. In Ptolemaic cosmology, the stars were embedded in a fixed celestial crystalline sphere (composed of aether), with the spherical Earth at the center of the universe. "So what you've got in the Salvator Mundi", Kemp states, "is really "a savior of the cosmos", and this is a very Leonardesque transformation."[31] 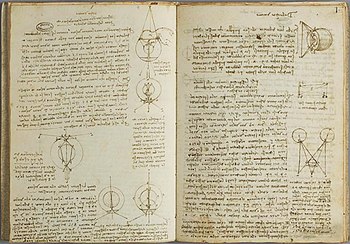 Another aspect of Leonardo's painting Kemp studied wasdepth of field, or shallow focus. Christ's blessing hand appears to be in sharp focus, whereas his face—though altered or damaged to some extent—is in soft focus. Leonardo's Manuscript D of 1508–1509,[41] explored theories of vision, optics of the eye, and theories relating to shadow, light and color. In Salvator Mundi, the artist deliberately placed an emphasis on parts of the picture over others. Elements in the foreground are seen with a sense of focus, while elements further removed are barely in focus, such as the subjects face. Manuscript D shows Leonardo was investigating this particular phenomenon around the turn of the century. Combined, the intellectual aspects, optical aspects, and the use of semi-precious minerals, are distinctive of Leonardo's oeuvres.[31]

"There is extraordinary consensus it is by Leonardo," said the former co-chairman of old master paintings at Christie's, Nicholas Hall: "This is the most important old master painting to have been sold at auction in my lifetime."

The reasons for the unusually uniform scholarly consensus that the painting is an autograph work by Leonardo are several, including the previously mentioned relationship of the painting to the two autograph preparatory drawings in Windsor Castle; its correspondence to the composition of the ‘Salvator Mundi’ documented in Wenceslaus Hollar’s etching of 1650; and its manifest superiority to the more than 20 known painted versions of the composition.

Furthermore, the extraordinary quality of the picture, especially evident in its best-preserved areas, and its close adherence in style to Leonardo’s known paintings from circa 1500, solidifies this consensus