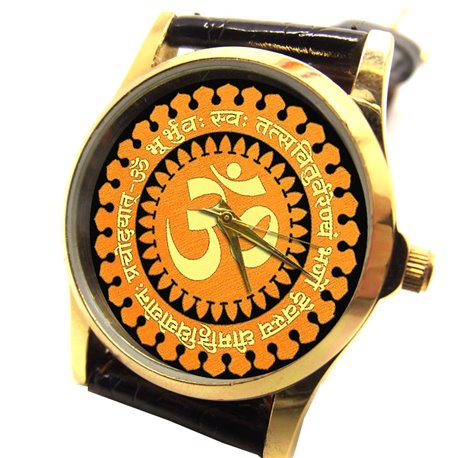 The syllable is mentioned in all the Upanishads, specially elaborated upon in the Taittiriya, Chāndogya and Māndukya Upanishad set forth as the object of profound religious meditation, the highest spiritual efficacy being attributed not only to the whole word but also to the three sounds a (a-kāra), u (u-kāra), m (ma-kāra), of which it consists. A-kara means form or shape like earth, trees, or any other object. U-kāra means formless or shapeless like water, air or fire. Ma-kāra means neither shape nor shapeless (but still exists) like the dark energy content of the Universe. When we combine all three syllables we get AUM which is a combination of A-kāra, U-kāra, and Ma-kāra.

om ity-etad akṣaram udgītham upāsīta / aum iti hy udgāyati / tasyopavyākhyānam
"The udgi:tā ["the chanting", that is, the syllable om] is the best of all essences, the highest, deserving the highest place, the eighth."

Uttering the monosyllable Aum, the eternal world of Brahman, One who departs leaving the body (at death), he attains the Supreme Goal (i.e., he reaches God).

In Bhagavad Gi:tā (9.17): Lord Krishna says to Arjuna – "I am the father of this universe, the mother, the support and the grandsire. I am the object of knowledge, the purifier and the syllable oṃ. I am also the Ṛig, the Sāma and the Yajur Vedas."

om tatsatiti nirdesho brahmanstrividhah samratah
"OM, tat and sat has been declared as the triple appellation of Brahman, who is Truth, Consciousness and Bliss."

In the following sūtra it emphasises, "The repetition of om should be made with an understanding of its meaning".

The Om Parvat in Pithoragarh district. Its snow deposit is said to resemble the "om" symbol. God Ganesha is sometimes identified with the om

In Purānic Hinduism, om is the mystic name for the Hindu Trimurti, and represents the union of the three gods, viz. a for Brahma, u for Vishnu and m for Mahadev which is another name of Shiva. The three sounds also symbolise the three Vedas, namely (Rigveda, Samaveda, Yajurveda).

According to Hindu philosophy (see Māndukya Upanishad), the letter A represents creation, when all existence issued forth from Brahma's golden nucleus; the letter U refers to Vishnu the God of the middle who preserves this world by balancing Brahma on a lotus above himself, and the letter M symbolises the final part of the cycle of existence, when Brahma falls asleep and Shiva has to breathe in so that all existing things have to disintegrate and are reduced to their essence to him. More broadly, om is said to be the primordial sound that was present at the creation of the universe. It is said to be the original sound that contains all other sounds, all words, all languages and all mantras.

The Māndukya Upanishad is entirely devoted to the explanation of the syllable. The syllable consists of three phonemes, a (Vaishvanara),[5] u (Hiranyagarbha), and m (Ishvara), which symbolise the beginning, duration, and dissolution of the universe and the associated gods Brahma, Vishnu, and Shiva, respectively.

In Advaita philosophy it is frequently used to represent three subsumed into one, a triune, a common theme in Hinduism. It implies that our current existence is mithyā and maya, "falsehood", that in order to know the full truth we must comprehend beyond the body and intellect the true nature of infinity. Essentially, upon moksha (mukti, samādhi) one is able not only to see or know existence for what it is, but to become it. When one gains true knowledge, there is no split between knower and known: one becomes knowledge/consciousness itself. In essence, Om is the signifier of the ultimate truth that all is one.

Depiction of om in Jain script

In Jainism, om is regarded to be a condensed form of reference to the Pañca-Parameṣṭhi, by their initials A+A+A+U+M (o3m). The Dravyasamgraha quotes a Prakrit line:

Thus, ओं नमः (oṃ namaḥ) is a short form of the Navkar Mantra.

Buddhists place om at the beginning of their Vidya-Sadaksari ("om mani padme hum") as well in as most other mantras and dharanis. Moreover, as a seed syllable (a bija mantra) aum is considered holy in Esoteric Buddhism.

A key distinction should be made here between Buddhism as it arose in Nepal, and Buddhism after the migration of the teachings to Tibet under the guidance of Padmasambhava. In its original form, Buddhism in Nepal was characterised mainly by types of mindfulness meditation and did not involve the chanting of om or of mantras.[7] Tibetan Buddhism, with heavy Hindu influence and merger with Bon Shamanism, is now characterised by the AH[clarification needed] bija, which can be roughly translated as representing pure spirit (the fifth in the Tibetan system of elements). -->

Eben Alexander (author) III (born December, 1953 in Charlotte, North Carolina) is a neurosurgeon and the author of the best-selling Proof of Heaven: A Neurosurgeon's Journey into the Afterlife, in which he shares his thoughts on his near-death experience and whether science can explain that heaven really does exist. In his book Eben says " "I will occasionally use Om as the pronoun for God","OM" was the sound I remembered hearing associated with that omniscient,omnipotent,and unconditionally loving god".

Ik Onkar, in modern Punjabi spelt out as ਇੱਕ ਓਅੰਕਾਰ, but iconically represented as ੴ in the Guru Granth Sahib (although sometimes spelt out in full as ਏਕੰਕਾਰੁ) is the statement of the uniqueness of God in Sikhism,[8] and is commonly translated simply as 'Ik' being One, 'Oang' being Primal Sound and 'Kaar' meaning Creation (coming from Akaar) .[9] Within the phrase, "ik" is the Punjabi word for "one", and "onkar" figuratively means "God";[10] "-kar" (in Punjabi ਕਾਰ) meaning "create", "work", or "action"