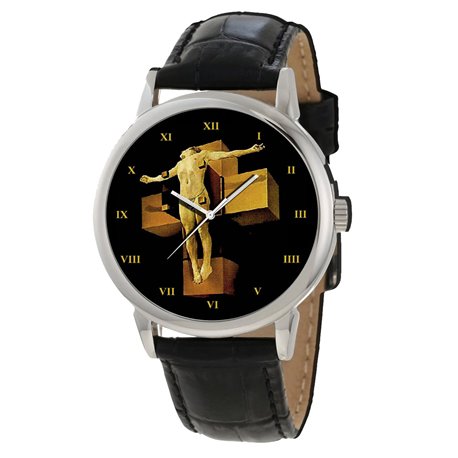 Crucifixion (Corpus Hypercubus) is a 1954 oil-on-canvas painting by Salvador Dalí which depicts the Crucifixion of Jesus, though it deviates from traditional portrayals of the Crucifixion by depicting Christ on thepolyhedron net of a hypercube and adding elements of Surrealism. It is one of his most well known paintings from the later period of his career.

Dalí’s inspiration for Corpus Hypercubus came from his change in artistic style during the 1940s and 1950s. Around that time, his interest in surrealism diminished and he became fascinated with nuclear science, feeling that “thenceforth, the atom was [his] favorite food for thought.” His interest grew from the bombing of Hiroshima at the end of World War II which left a lasting impression on him. In his 1951 essay “Mystical Manifesto”, he introduced an art theory he called “nuclear mysticism” that combined Dalí’s interests in Catholicism, mathematics, science, and Catalan culture in an effort to reestablish Classical values and techniques, which he extensively utilizes in Corpus Hypercubus. That same year, to promote nuclear mysticism and explain the “return to spiritual classicism movement” in modern art, he traveled throughout the United States giving lectures. Before painting Corpus Hypercubus, Dalí announced his intention to portray an exploding Christ using both classical painting techniques along with the motif of the cube and he declared that “this painting will be the great metaphysical work of [his] summer.” Juan de Herrera’s Treatise on Cubic Forms was particularly influential to Dalí.

Corpus Hypercubus is composed of oil on canvas, and its dimensions are 76.5 x 43.75 inches.[4] Consistent with his theory of “nuclear mysticism”, Dalí uses classical elements along with ideas inspired by math, science, etc. Some noticeably classic features are the drapery of the clothing and the Caravagesque lighting that theatrically envelops Christ, though like his 1951 painting Christ of Saint John of the Cross, Corpus Hypercubus takes the traditional Biblical scene of Christ’s Crucifixion and almost completely reinvents it. While he did attempt to distance himself from the Surrealist movement after his development of “nuclear mysticism”, Dalí still incorporates dream-like features consistent with his earlier surrealist work in Corpus Hypercubus, such as the levitating Christ and the giant chessboard below. Jesus’ face is turned away from the viewer, making it completely obscured. The crown of thorns is missing from Christ’s head as are the nails from his hands and feet, leaving his body completely devoid of the wounds often closely associate with the Crucifixion. With Christ of Saint John of the Cross, Dalí did the same in order to leave only the “metaphysical beauty of Christ-God”. Dalí sets the painting in front of the bay of Port Lligat in Catalonia, Dalí’s home, which is also the setting of other paintings of his including The Madonna of Port Lligat, The Sacrament of the Last Supper, and Christ of Saint John of the Cross. One's eyes are quickly drawn to the knees of Christ which have a grotesque exaggeration of realism detail. If one observes the original painting closely, 5 different images of Gala appear in Christ's right knee and 5 different images of Salvador appear in his left; the most prominent two being Gala's back/neck/back of head with right arm extended upward and Salvador's face replete with trademark up swept mustache. Additional knee images translate extremely poorly to reproductions/prints.

A net of a hypercube (tesseract)

The most striking change Dalí makes from nearly every other crucifixion painting concerns the cross. Instead of painting Christ on a wooden cross, Dalí depicts him upon the net of a hypercube, also known as a tesseract. The unfolding of a tesseract into eight cubes is analogous to unfolding the sides of a cube into six squares. The use of a hypercube for the cross has been interpreted as a geometric symbol for the transcendental nature of God. Just as God exists in a space that is incomprehensible to humans, the hypercube exists in four spatial dimensions, which is equally inaccessible to the mind. The net of the hypercube is a three-dimensional representation of it, similar to how Christ is a human form of God that is more relatable to people. The word “corpus” in the title can refer both to the body of Christ and to geometric figures, reinforcing the link Dalí makes between religion and mathematics and science.[5] Christ’s levitation above the Earth could symbolize His rise above Earthly desire and suffering. The motif of the cube is present elsewhere: Gala is standing on one and the chessboard is made up of squares.

On the bottom left of the painting, Dalí painted his wife Gala as Mary Magdalene looking up at Jesus. Dalí thought of her as the "perfect union of the development of the hypercubic octahedron on the human level of the cube". He used her as a model because "the most noble beings were painted by Velázquez and Zurbarán. [He] only [approaches] nobility when painting Gala, and nobility can only be inspired by the human being."[3]

Upon completing Corpus Hypercubus, Dalí described his work as “metaphysical, transcendent cubism.”  Author Ayn Rand declared Corpus Hypercubus to be her favorite painting and she would spend hours observing it at the Metropolitan Museum of Art. She felt a connection between John Galt’s defiance over his torture in her novel Atlas Shrugged and Dalí’s portrayal of Christ in the painting.[6] The union of Christ and the tesseract reflects Dalí’s opinion that the seemingly separate and incompatible concepts of science and religion can in fact coexist,[7] which has been lauded by viewers and has been widely considered one of Dalí’s masterworks. A reproduction of the painting is mentioned in J. G. Ballard's 1969 surrealist novel, The Atrocity Exhibition.

After being first exhibited in Rome in 1954, Corpus Hypercubus was moved to the Metropolitan Museum of Art, where it was renamed Crucifixion. After nearly 25 years, the painting was loaned to the Centre Georges Pompidou in Paris, France, the Daimaru Art Museum in Osaka, Japan, and the Tate Gallery in London from December 1979 until June 1980. Throughout the early and mid 1980’s Crucifixion was loaned to museums in Japan, Mexico, and Spain, including the Palau Reial de Pedralbes in Barcelona, the only time the painting would exhibit in Dalí’s home of Catalonia. It was later loaned to the Staatsgalerie Stuttgart in Germany and the Pabellon de Espana in Madrid before being loaned long-term to the Salvador Dalí Museum in St. Petersburg, Florida from 1993 to 1999. Afterward, in 2000, it was loaned to the Wadsworth Atheneum in Connecticut from January to March and the Hirshhorn Museum and Sculpture Garden in Washington D.C. In 2005, Corpus Hypercubus spent four months at the Philadelphia Museum of Art in Pennsylvania, and in 2006 it was loaned to the Museum Ludwig in Cologne, Germany before returning to New York, where it has remained since.