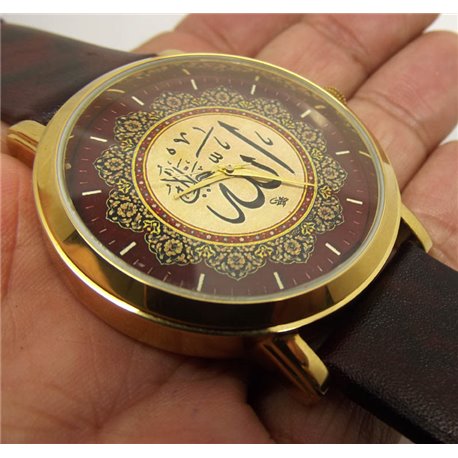 The term Allāh is derived from a contraction of the Arabic definite article al- "the" and ilāh "deity, god" to al-lāh meaning "the [sole] deity, God" (ὁ θεὸς μόνος, ho theos monos).[8] Cognates of the name "Allāh" exist in other Semitic languages, including Hebrew and Aramaic.[9]Biblical Hebrew mostly uses the plural form (but functional singular) Elohim. The corresponding Aramaic form is ʼĔlāhā ܐܠܗܐ in Biblical Aramaic and ʼAlâhâ ܐܲܠܵܗܵܐ in Syriac as used by the Assyrian Church, both meaning simply 'God'.[10] In the Sikh scriptures, Guru Granth Sahib, the term Allah (Punjabi: ਅਲਹੁ) is used 37 times.

The name was previously used by pagan Meccans as a reference to a creator deity, possibly the supreme deity in pre-Islamic Arabia.[12][13] The concepts associated with the term Allah (as a deity) differ among religious traditions. In pre-Islamic Arabia amongst pagan Arabs, Allah was not considered the sole divinity, having associates and companions, sons and daughters–a concept that was deleted under the process of Islamization. In Islam, the name Allah is the supreme and all-comprehensive divine name, and all other divine names are believed to refer back to Allah. Allah is unique, the only Deity, creator of the universe and omnipotent. Arab Christians today use terms such as Allāh al-Ab (الله الأب, 'God the Father') to distinguish their usage from Muslim usage. There are both similarities and differences between the concept of God as portrayed in the Quran and the Hebrew Bible.  It has also been applied to certain living human beings as personifications of the term and concept.

In pre-Islamic Arabia, Allah was used by Meccans as a reference to the creator-god, possibly the supreme deity. Allah was not considered the sole divinity; however, Allah was considered the creator of the world and the giver of rain. The notion of the term may have been vague in the Meccan religion.[8]Allah was associated with companions, whom pre-Islamic Arabs considered as subordinate deities. Meccans held that a kind of kinship existed between Allah and the jinn.[22]Allah was thought to have had sons[23] and that the local deities of al-‘Uzzá, Manāt and al-Lāt were His daughters. The Meccans possibly associated angels with Allah.[25][26] Allah was invoked in times of distress.[26][27] Muhammad's father's name was ‘Abd Allāh meaning 'the slave of Allāh' According to Islamic belief, Allah is the proper name of God,[28] and humble submission to his will, divine ordinances and commandments is the pivot of the Muslim faith. "He is the only God, creator of the universe, and the judge of humankind." "He is unique (wāḥid) and inherently one (aḥad), all-merciful and omnipotent." The Qur’an declares "the reality of Allah, His inaccessible mystery, His various names, and His actions on behalf of His creatures." In Islamic tradition, there are 99 Names of God (al-asmā’ al-ḥusná lit. meaning: 'the best names' or 'the most beautiful names'), each of which evoke a distinct characteristic of Allah.[6][29] All these names refer to Allah, the supreme and all-comprehensive divine name.[14] Among the 99 names of God, the most famous and most frequent of these names are "the Merciful" (al-Raḥmān) and "the Compassionate" (al-Raḥīm).

Most Muslims use the untranslated Arabic phrase in shā’ Allāh (meaning 'if God wills') after references to future events.[30] Muslim discursive piety encourages beginning things with the invocation of bismillāh (meaning 'in the name of God').

There are certain phrases in praise of God that are favored by Muslims, including "Subḥān Allāh" (Holiness be to God), "al-ḥamdu lillāh" (Praise be to God), "lā ilāha illā Allāh" (There is no deity but God) and "Allāhu akbar" (God is great) as a devotional exercise of remembering God (dhikr).[32] In a Sufi practice known as dhikr Allah (lit. remembrance of God), the Sufi repeats and contemplates on the name Allah or other divine names while controlling his or her breath.

Some scholars have suggested that Muḥammad used the term Allah in addressing both pagan Arabs and Jews or Christians in order to establish a common ground for the understanding of the name for God, a claim Gerhard Böwering says is doubtful. According to Böwering, in contrast with pre-Islamic Arabian polytheism, God in Islam does not have associates and companions, nor is there any kinship between God and jinn.[28] Pre-Islamic pagan Arabs believed in a blind, powerful, inexorable and insensible fate over which man had no control. This was replaced with the Islamic notion of a powerful but provident and merciful God.

According to Francis Edwards Peters, "The Qur’ān insists, Muslims believe, and historians affirm that Muhammad and his followers worship the same God as the Jews (29:46). The Qur’an's Allah is the same Creator God who covenanted with Abraham". Peters states that the Qur’an portrays Allah as both more powerful and more remote than Yahweh, and as a universal deity, unlike Yahweh who closely follows Israelites

Name of Allāh after the 17th century Ottoman calligrapherHâfız Osman