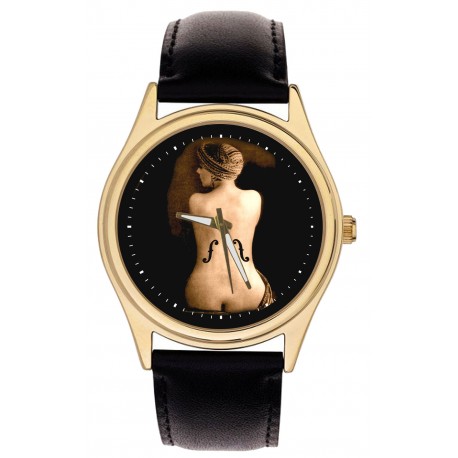 Not long after moving to Paris in 1921, American avant-garde artist Man Ray met and fell deeply in love with the model and performer Alice Prin, who went by the nickname Kiki de Montparnasse. Kiki served as the Surrealist and Dada artist’s muse for much of the next decade and, in 1924, she posed for a photograph that became Ray’s best-known work—and one of the 20th century’s most acclaimed pieces of art.

Now, nearly 100 years later, the famed Le Violon d'Ingres photograph—which shows Kiki’s nude back overlaid with the f-holes found on a violin—has sold at auction for a record-breaking $12.4 million. It’s now the most expensive photograph ever sold at auction, smashing Christie’s pre-auction estimate of $5 million to $7 million.

“I like to think of it as the photographic Mona Lisa of the twentieth century,” Darius Himes, head of international photographs for Christie’s, said at a press preview of the auction, as reported by Forbes’ Natasha Gural. “…in terms of photography, this is really a holy grail.”

Le Violon d'Ingres first appeared publicly in the Dada- and Surrealism-focused magazine Littérature in June 1924. The just-sold version is considered an original photographic copy, which enhanced its value. It had belonged to New York collectors Rosalind Gersten Jacobs and Melvin Jacobs, who bought the photograph directly from the artist in 1962.

The photograph’s name is a nod to 19th-century French artist Jean-Auguste-Dominique Ingres, who wanted to be recognized not only for his proficiency as a painter, but also for his skill at playing the violin. He was such an esteemed visual artist that the public did not take his musical talents seriously, thus relegating his violin-playing to a mere hobby, per Christie’s. To this day, violon d’Ingres is a French expression that means “hobby.”

Ingres’ plight apparently resonated with Ray, who did not wish to be known only as a photographer, but also as a painter. Photography was “a medium he employed to record his own work and the activities of his friends, but not something he wanted to be associated exclusively with his artistic production” and was simply “a means by which to express a given idea,” according to Christie’s.

Ray also drew inspiration from Ingres’ work itself, including Baigneuse de Valpinçon and The Turkish Bath, two paintings in which the focal point is a nude woman facing away from the viewer with a turban on her head.

Born Emmanuel Radnitsky in Philadelphia in 1890, Ray was, as curator Merry Foresta told Smithsonian’s Abby Callard in 2009, “a mysterious inventor, an alchemist.” A 1934 portrait of Man Ray by photographer Carl Van Vechten. Library of Congress

Kiki herself was a prolific artistic muse, also modeling for Amedeo Modigliani and other artists in Paris’ teeming bohemian scene. She was also a painter in her own right, and exhibited her paintings in both a solo show and group exhibitions. But she was perhaps most famous for her memoirs, which documented the louche life of Montparnasse and its freewheeling artistic community. Published in 1929, the book was immediately banned in the United States.

Meanwhile, “Parisians queued up to obtain an autographed copy—and a kiss,” wrote Andrea Barnet for the New York Times in 1997, the year the memoirs were finally published in the U.S.

To create the iconic Le Violon d'Ingres photograph, Ray used what he called the “rayograph” technique (known more widely as the photogram technique), which involved burning the f-hole shapes onto light-sensitive paper, then making a second exposure of the photograph to fuse the two together.

“I remember you asking for the back of Kiki, which is really a combination of photo and rayograph—an original like the rayograph,” Ray wrote to Rosalind Gersten Jacobs, per Christie’s.

Though Ray considered photography more of a pastime than a professional craft—his own personal violon d’Ingres—the record-setting sale of his iconic portrait proves otherwise. As Himes tells Artnet’s Taylor Dafoe, no other photograph has “proven to have the lasting power and playful eroticism that define the Surrealists of the 1920s.”