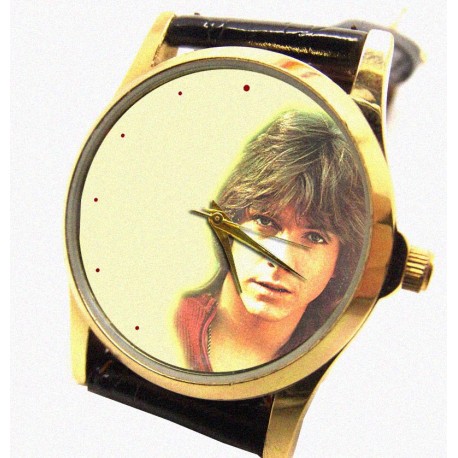 David Bruce Cassidy (born April 12, 1950) is an American actor, singer, songwriter and guitarist. He is best known for his role as the character of Keith Partridge in the 1970s musical/sitcom The Partridge Family. He was one of pop culture's most celebrated teen idols, enjoying a successful pop career in the 1970s, and still performs today.

David Cassidy was born at Flower Fifth Avenue Hospital in New York City, the son of actor Jack Cassidy and actress Evelyn Ward. His father was of half Irish and half German ancestry, and his mother is of mostly Colonial American descent, along with smaller amounts of Irish and Swiss. Some of his mother's ancestors were among the founders of Newark, New Jersey.

As his parents were frequently touring on the road, he spent his early years being raised by his maternal grandparents in a middle-class neighborhood in West Orange, New Jersey. In 1956, he found out from neighbors' children that his parents had been divorced for over two years and had not told him. David's parents had decided because he was at such a young age, it would be better for his emotional stability to not discuss it at that time. They were gone often with theater productions and home life remained the same.

In 1956, his father married actress Shirley Jones, and three half-brothers were born: Shaun (1958), Patrick (1962) and Ryan (1966). As a young teen he moved into Shirley's home in Beverly Hills where his father and half-brothers resided. David remained there seeking fame as an actor/musician until he moved out when his career began to flourish.

On January 2, 1969, Cassidy made his professional debut in the Broadway musical The Fig Leaves Are Falling. It closed after four performances but a casting director saw the show and asked Cassidy to make a screen test. In 1969, he moved to Los Angeles.

After signing with Universal Studios in 1969, Cassidy was featured in episodes of the TV series Ironside, Marcus Welby, M.D., Adam-12 and Bonanza. In 1970, he took the part of Keith Partridge, son of Shirley Partridge, who was played by Cassidy's real stepmother and series' lead, Shirley Jones. The Partridge Family series creator Bernard Slade and producers Paul Junger Witt and Robert "Bob" Claver did not care whether Cassidy could sing, knowing only that his androgynousgood looks would guarantee success. But shortly after production began, Cassidy convinced music producer Wes Farrell that he was good enough and he was promoted to lead singer for show's recordings. Once "I Think I Love You" became a hit, Cassidy began work on solo albums as well. Within the first year he had produced his own single, "Cherish" (from the album of the same title), which reached No. 9 in the US, and began tours that featured Partridge tunes and his own hits. Though he strove to become a respected rock musician along the lines of Mick Jagger or Alice Cooper, his channel of stardom launched him into the ranks of teen idol, a brand he loathed until much later in life when he managed to come to terms with his bubblegum pop beginnings.

On and off the show, Cassidy had a strong bond with his stepmother. He and co-star Danny Bonaduce did not get along with Jeremy Gelbwaks, the young actor who originally played Chris.[citation needed] He was replaced by Brian Forster after the first season. Ten albums by The Partridge Family and five solo albums were produced during the show. Cassidy also became an instant drawcard with spectacular sellout concerts successes in major arenas around the world. These concerts produced mass hysteria resulting in the media coining the term "Cassidymania". By way of example, he played to two sellout crowds of 56,000 each at the Houston Astrodome in Texas over one weekend in 1972. His concert in New York's Madison Square Gardensold out in one day and resulted in riots after the show. His concert tours of the UK sold out and included six sellout concerts at Wembley Stadium over one weekend in 1973. In Australia in 1974, the mass hysteria was such that there were calls to have him deported from the country, especially after the madness at his 33,000 audience concert at Melbourne Cricket Ground.

A turning point in his live rock concerts (while still filming The Partridge Family) was a gate stampede which killed a teenage girl. At a show in London's White City Stadium on May 26, 1974, 650 were injured in a crush at the front of the stage. Thirty were taken to the hospital, and one, 14-year-old Bernadette Whelan, died on May 30 from injuries. The show was the penultimate date on a world tour. A deeply affected Cassidy faced the press, trying to make sense of what had happened. Out of respect for the family and to avoid turning the girl's funeral into a media circus, Cassidy did not attend the service. He did, however, speak to Bernadatte's parents and send flowers. Cassidy stated at the time that this would haunt him until the day he died.[

Cassidy's 1994 autobiography C'mon Get Happy: Fear And Loathing On The Partridge Family Bus provides an account of most aspects of his fame, including contracts, money and his fanatical worldwide fan following.

By this point, Cassidy had decided to quit both touring and acting in The Partridge Family, concentrating instead on recording and song-writing. International success continued, mostly in Great Britain and Germany, when he released three well-received solo albums on RCA between 1975 and 1977. Cassidy became first to have a hit with I Write The Songs, a Top 20 record in Great Britain before the song became Barry Manilow's signature tune. Cassidy's recording was produced by the song's author-composer, Bruce Johnston of The Beach Boys.

In 1978, Cassidy starred in an episode of Police Story titled "A Chance To Live," for which he received an Emmy nomination. NBC created a show based on it, called David Cassidy: Man Under Cover, but it was canceled after one season. However, the format was used in a well-received Fox TV series, 21 Jump Street, with Johnny Depp in the role Cassidy had vacated.

In 1985, music success continued with the Arista release of the single The Last Kiss (#6 in the UK), with backing vocals by George Michael, which was included on the album Romance. These went gold in Europe and Australia and Cassidy supported them with a sellout tour of the UK which resulted in the Greatest Hits Live compilation of 1986. George Michael cited Cassidy as a major career influence and interviewed Cassidy for David Litchfield's prestigious Ritz Newspaper.

Cassidy returned to the American Top 40 with his 1990 single "Lyin' To Myself," released on the Enigma Records label. In 1998, he had an AC hit with "No Bridge I Wouldn't Cross" from his album Old Trick, New Dog. His 2001 album Then And Now went platinum internationally and returned Cassidy to the Top 5 of the UK album charts for the first time since 1974.

Cassidy has performed in musical theatre. In 1981, he toured in a revival of a pre-Broadway production of Little Johnny Jones, a show originally produced in 1904 with music, lyrics, and book by George M. Cohan. (The show is excerpted in the biographic film Yankee Doodle Dandy (1942), when James Cagney sings Give My Regards to Broadway and The Yankee Doodle Boy.) However, Cassidy received negative reviews, and he had been replaced by another former teen idol, Donny Osmond,[17] by the time the show reached Broadway. Cassidy, in turn, was himself a replacement for the lead in the original 1982 Broadway production of Joseph and the Amazing Technicolor Dreamcoat. He appeared in London's West End production of Time and returned to Broadway in Blood Brothers alongside Petula Clark and his half-brother, Shaun Cassidy. In concert performances in 1990, Cassidy hired his recalcitrant TV brother Danny Bonaduce as his warm-up act. In 1995, he hosted the VH1 show 8-Track Flashback, which ran until 1998. In 1996, he replaced Michael Crawford in the Las Vegas show EFX, re-writing it into one of the Strip's favorite shows – although Cassidy was forced to resign after he injured his foot during a performance. He also created The Rat Pack is Back. in which he made guest appearances as Bobby Darin, and which ran successfully. In 2000, he wrote and appeared in the Las Vegas show At the Copa, withSheena Easton, as both the young and old versions of the lead character, Johnny Flamingo. In 2005, Cassidy played the manager of Aaron Carter's character in the film Popstar. In 2006, as well as performing with Peter Furniss and Thomas Bowles, he made a guest appearance for BBC Children in Need performing live, then assisting Terry Wogan collecting donations from the studio audience.

He co-starred alongside his brother Patrick in a 2009 ABC Family short-lived comedy series titled Ruby & The Rockits, a show created by his brother Shaun.

The BBC telecast an episode of The One Show with Cassidy as guest on April 11, 2011. During the broadcast he got into an argument with an English horse racing commentator named Brough Scott. Nancy Sinatra had this to say on her family's website later that day: "Cassidy is a real jerk who never cleared rights to the Sinatra name for his Sinatra show and he deserves his karma for breaking copyright laws. The proof of the pudding is he didn't give a damn about those poor horses or show any respect to Mr. Scott. I believe he respects nothing and nobody, especially my father."

On November 25, 1986, after 15 years of an on and off relationship with high fashion model Sherry Williams, she gave birth to David's only daughter, Katherine Evelyn Cassidy (Katie), now a successful film actress. Sherry raised their daughter with her husband of 20 years, the physician Richard Benedon in Calabasas, California, where they currently reside.

David Cassidy has a son with Sue Shifrin, Beau Devin Cassidy, born February 8, 1991. Cassidy and Shifrin married on March 30, 1991. Beau is currently pursuing a music career and resides in Boston. This is David's third marriage and he currently resides in Saratoga Springs, N.Y. having a stable horse business, while Sue (this her second marriage) resides in Ft. Lauderdale, Florida, living alone while attempting to pursue her songwriting career and working for a cosmetics firm.

Cassidy has written a memoir that was published in the UK in March 2007. Could It Be Forever? My Story gives details of his personal life.

Cassidy was arrested in Florida for DUI on November 3, 2010.[24] Cassidy continues his stint in rehab, which was the result of his dependency on pain medication, after his injury during EFX in Las Vegas.

In 2011, Cassidy recorded a public service announcement for Alzheimer's research and prevention—due to his mother, Evelyn Ward, having the disease—and said that he will champion that cause whenever possible. He plans to address Congress in 2012.

Cassidy is a long-time registered Democrat. Describing Republican candidates for president Mitt Romney and Newt Gingrich as a panelist on the Colbert Report, Cassidy stated, "I believe the both of them are the most embarrassing, sad, pathetic... I mean, really, this is the best we can do?"