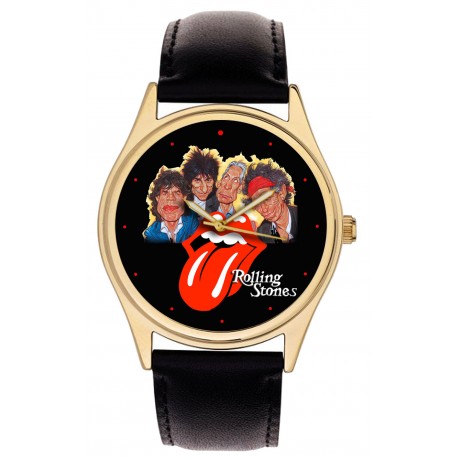 The Rolling Stones are an English rock band formed in London in 1962. Their early mission was to share an enthusiasm forrhythm and blues, but they were received as symbols and leaders of rebellious youth. The first settled line-up had Brian Jones on guitar and harmonica, Ian Stewart on piano, Mick Jagger on lead vocals and harmonica, Keith Richards on guitar and backing vocals, Bill Wyman on bass and Charlie Watts on drums. Jones founded and led the band, but after teaming as co-writers Jagger and Richards assumed leadership. Jones' increasing physical and mental troubles forced his departure from the band two weeks prior to his death by drowning in 1969. Since Wyman left in 1993, the full band members have been Jagger, Richards, Watts and guitarist Ronnie Wood who joined in 1975 replacing Jones' successor Mick Taylor.

The Rolling Stones were in the vanguard of the "British Invasion" of English bands that became popular in the U.S. from 1964–65. They were also in the forefront of making blues a major part of rock and roll, and of changing the international focus of blues culture away from the cosmopolitan blues preferred by most African-Americans to the more primitive blues typified by John Lee Hooker and by Chess Records artists such as Muddy Waters, writer of "Rollin' Stone", the song after which the band is named.[3]Their endurance has been credited to being "rooted in traditional verities, in rhythm-and-blues and soul music" while "more ephemeral pop fashions have come and gone".

The Rolling Stones were inducted into the Rock and Roll Hall of Fame in 1989, and the UK Music Hall of Fame in 2004.[1] Rolling Stone magazine ranked them fourth on the "100 Greatest Artists of All Time" list and their estimated album sales are above 200 million. They have released twenty-four studio albums, eleven live albums and numerous compilations.[5] Sticky Fingers (1971) was their first of eight consecutive number one studio albums in the United States. In 2008 the Rolling Stones ranked 10th on the "Billboard Hot 100 All-Time Top Artists" chart. In 2012 the band celebrated their 50th anniversary