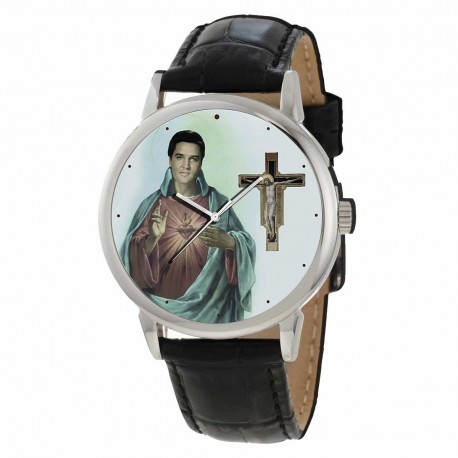 Elvis Presley Boulevard, Memphis, 16 August, 2002: The normally traffic-choked state highway has been transformed from something quite different from its workday self.  Candles flicker in the darkness, the rain pours down, and some 40,000 people keep their night long vigil.  It’s a bizarre scene, like some kind of Bergmanesque, mediaeval pilgrimage transported into the 21st century America, with tears and laughter, celebration and mourning mingling in a tableau of devout humanity.  You have to ask yourself: what’s going on?

Despite Presley’s own deep, if somewhat selective, devotion to the Baptist-version of Christianity, the figure of Elvis-as-Messiah was one that he actively helped create, from a heady mixture of innocence, vanity, soul-searching and delusion.

Elvis never liked being called ‘the King’, maintaining that there was only one such and he certainly wasn’t of this world, but messianic obsessions and delusions overtook him later in life.  The spangled jumpsuits and grandiosity of the arrangements in his 1970s shows hint at what was going on: anyone who can emerge on stage to the strains of Richard Strauss’s Also Sprach Zarathustra (which Elvis had come across in his many viewings of 2001) and keep a straight face is pretty certain of their own importance.  Consider the lyrics to Life (from 1971) and it’s clear we’ve come a long way from Hound Dog:

It’s one of the most mind-bogglingly awful songs ever recorded by anyone, ever, but Elvis no doubt took its cosmic nebulosities quite seriously.  He was already aiming higher than mere personal enlightenment, trying out the role of a truly syncretic saviour, whether designing a medallion that united the crucifix with the Star of David, handing out scarves kissed with his sweat like so many holy relics, turning up at the White House to demand that President Nixon make him an undercover narcotics agent so he could single-handedly win America’s war on drugs or delivering bizarre 30-minute lectures on the spiritual aspects of karate to bewildered Vegas audiences.

And if, in the end, it all turned to the Christ-like loneliness of an increasingly self-tortured, hermetic life and a death that achieved utter bathos, that’s precisely what rounds out this American tragedy and leaves the 40,000 pilgrims outside Graceland wanting more.  It’s a great 20th-century story about broken dreams, the nightmare of celebrity and the excesses of the very rich, and written between its lines is another, timeless one that is almost Gnostic in its insistence on the divine spark, trapped in the wracked, fleshy body, that just wants to go home.

Getting back on the bus to Beale Street, I realise that this is why the gates of Graceland swallow up so many thousands of visitors each year, why Heartbreak Hotel is always full of tourists and why the streets will soon be full of candle-wielding pilgrims; they all understand that Elvis died for our sins.

A new religion is springing up throughout America, and in other parts of the world. Mainstream faiths dismiss it as a cult, but the numbers of its faithful are growing. The Presleyite Disciples, who are also sometimes called, “Elvites”, worship Elvis as their god.  We spoke to a Minister of the Presleyite Disciples about his belief system.

“It has been twenty five years since our Lord and Savior, Elvis Presley, ascended into heaven. He is now sitting on his holy throne, looking down upon us.” Our reporter asked him if he was joking, and he insisted that he was perfectly serious. He went on to tell THE UNCOVEROR more about his cult, and their rituals.

“I was one of the original twelve who witnessed the vision of Elvis. On the first anniversary of The King’s passing, we gathered together at Graceland. We were the first, and last, tour group ever to be allowed upstairs. As we shared our stories of how he remembered him, we began to weep. A woman named Jessica exclaimed ‘Elvis! If only you were here with us, we could’…” He explained that before she could finish, a strong wind blew into the room, a haze formed in front of them that brightened to a blinding light, then The King appeared before them.

“Thank you, Thank you,” he said. “Don’t cry all the time, like you ain’t nothing but a hound dog. I am here.” We were overcome with a feeling of joy as he spoke to us again, saying, “I am The King. I have heard your voices crying out. I did not die one year ago, I returned home to heaven, where I was since the beginning, and will be until the end. Earth was not yet ready to receive me. I want you twelve to make them ready. Go to all the world and tell them that Elvis is Lord. Tell them that all their pain and sorrow can be washed away, if they will accept Elvis as their Lord and Savior, and follow me. You will lead my disciples, and make the world ready to receive me.” A bright light formed around him, and he began to fade into it. We started to weep again, but he waved goodbye, saying “Don’t you cry. I’ll be back again someday.”

“Our faith was founded that day, and we began to perform our rituals. He was the hunk-a hunk-a burnin’ love in that bush speaking to Moses. It was he who performed all miracles. We keep a small handgun near the TV whenever we watch to strike with wrath and mighty vengeance should it offend us, as he did. We wear costumes to appear as he did, and we recite The Holy Trinity.”

I asked him what the Holy Trinity was, and he replied, “Dixie, The Battle Hymn of the Republic, and Hush Little Baby. We want all the world to hear our message. Are you lonesome tonight? Is your life all shook up? You can check out of the Heartbreak Hotel if you accept Elvis as your Lord and Savior. No Elvis, no peace. Know Elvis, know peace. In his memory, all Elvite women wear the cotton panties he enjoyed seeing on his female fans, and all of us eat peanut butter and banana sandwiches.”

I asked him how he felt about his organization being called a cult. He told me, “A cult is just what closed-minded people call a religion they don’t like. A small new religion is called a cult, and a large established cult is called a religion. To gain respect as an official religion, we are all putting “Presleyite Disciple" on our census forms under religion. Star Wars devotees have forced Congress to recognize Jedi as a real religion by doing this, and Elvites can, too.”

As strange as it may seem, the Elvites are not the only Elvis cult. There is also The First Church of Jesus Christ, Elvis. They even have a website. Many people have a big problem with these groups. THE UNCOVEROR spoke to James Parsons, a man who knew Elvis while he was alive, and detests these Elvis Cults. “Elvis is dead. Let him rest, and by the way, Elvis did not like being called The King. He said that there is only one king, The King of Kings. He was a simple musician, and a religious man who would find the idolatry of the Presleyite Disciples and the rest of them highly offensive and troubling. I’ll bet that this whole thing is just a money grab like Scientology. Look at all the suckers that scam has taken!”

He told us that Elvis’ music touched and moved many people, and it is good that we remember him, but many fans obsession with him today borders on necrophilia. He also does not like Elvis impersonators. “Those idiots with their big hair wigs that look nothing like Elvis’ hair, and those ridiculous sunglasses that Elvis did not wear are not a tribute. They are making fun of him. It’s so disrespectful! Elvis was not a buffoon. These impersonators are buffoons.”

We will continue to investigate this story. The Elvites, may indeed be a money grab scam. Many con men have observed that an effective way to get rich quick is to invent a religion. One thing is certain; people’s devotion to Elvis is not going away. They gathered at Graceland, and braved pouring rain to observe the twenty-fifth anniversary of his passing. Many of the people who gathered were reciting The Lord’s Prayer. In twenty years, they may be reciting The King’s Prayer.