Scotland emerged as an independent polity during the Early Middle Ages, with some historians dating its foundation from the reign of Kenneth MacAlpin in 843.[9][note 1] The level of independence of the Scottish kingdom was fought over by the Scottish kings and by theNorman and Angevin rulers of England who petitioned the Pope and other foreign rulers.[9] A popular myth in English folklore was that Britain had been founded by Brutus of Troy, who had left England to his eldest son, Locrinus, and Scotland to his youngest son, Albanactus.[9]Scots disputed this and established their own popular myth, which was that Scotland had been founded earlier, by a Greek prince Goídel Glas and his wife Scota, daughter of the Pharaoh.[9] According to legend, Scota carried the Stone of Destiny from Egypt to Scotland.

A watershed in the Scottish kingdom's history was a succession crisis that erupted in 1290 where Edward I of England claimed the right of succession to the Scottish throne. The Auld Alliance of Scotland and France against English interests was first invoked at this time and remained active through to the 1500s. The Wars of Scottish Independence ended in a renewed kingdom under Robert the Bruce (crowned 1306), whose grandson Robert II of Scotland was the first Scottish king of the House of Stuart. 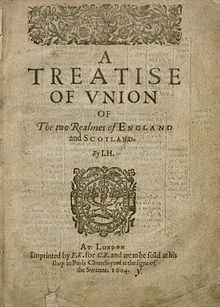 A treatise of union of the two realmes of England and Scotland by John Hayward, 1604

From 1603, Scotland and England shared the same monarch in a personal union when James VI of Scotlandwas declared King of England and Ireland in what was known as the Union of the Crowns. After James VII of Scotland (II of England) was deposed in 1688 amid Catholic-Protestant disputes, and as the line of Protestant Stuarts showed signs of failing (as indeed occurred in 1714), English fears that Scotland would select a different monarch, potentially causing conflict within Great Britain, and the bankruptcy of many Scottish nobles through theDarien scheme led to the formal union of the two kingdoms in 1707, with the Treaty of Union and subsequent Acts of Union, to form the Kingdom of Great Britain. Scottishjacobite resistance to the union, led by descendants of James VII/II including Bonnie Prince Charlie, continued until 1746.

The "Home Rule" movement for a Scottish Assembly was first taken up in 1853 by theNational Association for the Vindication of Scottish Rights, a body close to the Conservative Party. A key element in this movement was the comparison with Ireland. The original movement broadened its political appeal and soon began to receive Liberal Partybacking.[10][not in citation given] In 1885, the post of Secretary for Scotland and the Scottish Office were re-established to promote Scotland's interests and express its concerns to the British Parliament. In 1886, however, William Ewart Gladstone introduced the Irish Home Rule Bill. When many Scots compared what they had to the Irish offer of Home Rule, the status quo was considered inadequate.[citation needed] It was not regarded as an immediate constitutional priority however, particularly when the Irish Home Rule Bill was defeated in theHouse of Commons.

Immediately before the First World War, the Liberal Government led by H. H. Asquithsupported the concept of "Home Rule all round", whereby Scottish home rule would follow the Irish home rule proposed in the Government of Ireland Act 1914.[11] Asquith believed that there was an iniquity in that the component parts of the United Kingdom could come together to act together in common purposes, but those components could not deal with internal matters that did not require consent across the UK.[11] This was not a nationalist philosophy, but instead Asquith was acting in the belief that federalism was the "true basis of union" and that centralising power in Westminster was the "worst of all political blunders".[12] A Scottish Home Rule bill was first presented to parliament in 1913, but its progress was soon ended as Parliament focused on emergency measures necessitated by the First World War.[12]

Unlike Ireland, which rebelled in the Easter Rising and fought a War of Independence, Scotland did not resist central rule.[12] There was, however, a persistent demand for Scottish home rule.[12] The Scottish Office was relocated to St Andrew's House in Edinburgh during the 1930s.[10][13] The Scottish Covenant was a petition to the UK government asking for home rule. It was first proposed in 1930 by John MacCormick and formally written in 1949. The petition "was eventually signed by two million people"[14] (the population of Scotland was 5.1 million in the census of 1951[15]). The covenant was ignored by the main political parties.[14] Also in 1950, the Stone of Destiny was removed from Westminster Abbey by nationalists.

The question of full independence, or the less controversial home rule, did not re-enter the political mainstream until 1960, after the famous Wind of Change speech by UK Prime Minister Harold Macmillan. This speech marked the start of a rapid decolonisation in Africa and the end of the British Empire. The UK had already suffered the international humiliation of the 1956 Suez Crisis, which showed that it was no longer the superpower it had been before World War II. For many in Scotland, this served to undermine one of the principal raisons d'être for the United Kingdom and also symbolised the end of popular imperialism and the Imperial unity that had united the then-prominent Scottish Unionist Party. The Unionist Party subsequently suffered a steady decline in support.