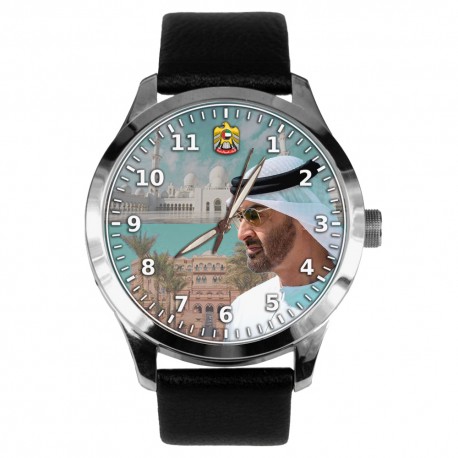 Sheikh Mohammed bin Zayed bin Sultan Al Nahyan (Arabic: محمد بن زايد بن سلطان آل نهيان‎; born 11 March 1961), colloquially known by his initials as MBZ,[1] is the Crown Prince of the Emirate of Abu Dhabi, Deputy Supreme Commander of the United Arab Emirates Armed Forces and the de facto ruler of Abu Dhabi. He is seen as the driving force behind the UAE's interventionist foreign policy and is a leader of a campaign against Islamist movements in the Arab World.[2][3] In January 2014, Khalifa suffered a stroke but was in a stable condition. He has since assumed a lower profile in state affairs, but retained presidential powers. Sheikh Mohammed bin Zayed Al Nahyan now carries out public affairs of the state. Mohammed bin Zayed was entrusted with most day-to-day decision making of the emirate of Abu Dhabi as the crown prince of Abu Dhabi and most of the presidential public affairs of the state and hence, he is sometimes considered as the UAE's de facto ruler.[4] In 2019 the New York Times named him as the most powerful Arab ruler and one of the most powerful men on Earth.[5][6] He was also named as one of the 100 Most Influential People of 2019 by TIME magazine.