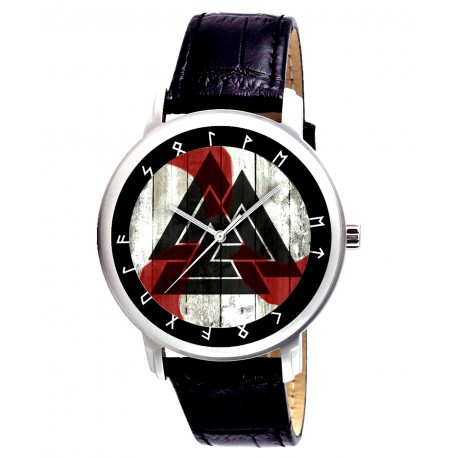 The valknut is a symbol consisting of three interlocked triangles. It appears on a variety of objects from the archaeological record of the ancient Germanic peoples. The term valknut is derived from the modern era, and the term or terms used to refer to the symbol during its historical employment is unknown.

Scholars have proposed a variety of explanations for the symbol, sometimes associating it with the god Odin, and it has been compared to the three-horned symbol found on the 9th-century Snoldelev Stone, to which it may be related.[1]

The valknut receives sporadic use in modern popular culture and is again associated with Germanic paganism by way of its modern-day revival, Heathenry.

A section of the Stora Hammars I stone in Gotland, Sweden depicts a valknut in a central and predominant position, appearing alongside figures interpreted as Odin with a characteristic spear shunting another figure into a burial mound while a raven is overhead and another man is hanged.

The valknut appears on a wide variety of objects found in areas inhabited by the Germanic peoples. The symbol is prominently featured on the Nene River Ring, an Anglo-Saxon gold finger ring dated to around the 8th to 9th centuries.[2] A wooden bed in the Viking Age Oseberg Ship buried near Tønsberg, Norway features a carving of the symbol on an ornately stylized bedpost and the Oseberg tapestry fragments, a partially preserved tapestry found within the ship burial, also features the symbol.[3] Additionally, the valknut appears prominently on two picture stones from Gotland, Sweden: the Stora Hammars I stone and the Tängelgårda stone.

In Norwegian Bokmål, the term valknute is used for a polygon with a loop on each of its corners.[4] In the English language the looped four-cornered symbol is called Saint John's Arms.

Several explanations for the symbol have been proposed:

Chapter 17 of the 13th century Prose Edda book Skáldskaparmál contains the following description of the heart of the jötunn Hrungnir; "Hrungnir had a heart that was famous. It was made of hard stone with three sharp-pointed corners just like the carved symbol hrungnishjarta [Hrungnir's heart]."[5] Comparisons have been made between this symbol description and the symbol known as the valknut.[1] 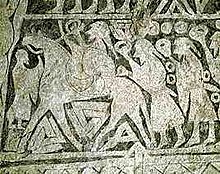 The Tängelgårda stone from Gotland, Sweden features valknuts below a depiction of a horse

Hilda Ellis Davidson theorizes a connection between the valknut, the god Odin and "mental binds":

For instance, beside the figure of Odin on his horse shown on several memorial stones there is a kind of knot depicted, called the valknut, related to the triskele. This is thought to symbolize the power of the god to bind and unbind, mentioned in the poems and elsewhere. Odin had the power to lay bonds upon the mind, so that men became helpless in battle, and he could also loosen the tensions of fear and strain by his gifts of battle-madness, intoxication, and inspiration.[6]

Davidson says that similar symbols are found beside figures of wolves and ravens on "certain cremation urns" from Anglo-Saxon cemeteries in East Anglia.[6]

Due to the fact that the symbol appears on picture stones with Odin and on burial gifts in the Oseberg ship burial, Rudolf Simek says that the symbol may have been associated with religious practices surrounding death.[1]

The valknut is topologically equivalent to either the Borromean rings, the trefoil knot, or (in modern use only) a closed three-link chain, depending on the particular artistic depiction:

The valknut symbol plays a role in modern Heathenry, where numerous explanations and interpretations of the symbol are given. It has been used by various political groups, and sometimes sees use in modern popular culture. In Europe, the Swedish pulp and paper manufacturer and consumer goods company Svenska Cellulosa Aktiebolaget uses a triquetra valknut as their logo, which can be commonly seen on many products produced by the company; the DFB has used a logo inspired by the unicursal form of the valknut for the Germany national football team since 1991. [7] The symbol appears as the fretboard inlay on some of Arch Enemy/Carcass guitarist Michael Amott's signature Dean Guitars "Tyrant" models, and it is also used as a logo by American engineering firm RedViking.[8] In Civilization VI, the valknut is the national symbol of Norway, which in the game is lead by Harald Hardrada and mostly representative of Vikings rather than the modern country.

The symbol, like many others associated with Germanic paganism, has been appropriated by some white nationalist groups to represent their heritage.[9][10] Despite this, the valknut has not been classified as generally objectionable by the German government