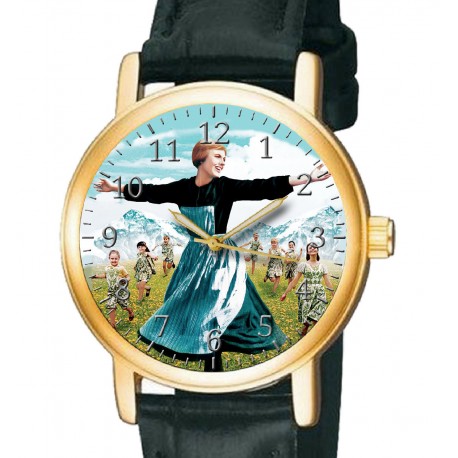 The Sound of Music is a musical with music by Richard Rodgers, lyrics by Oscar Hammerstein II and a book byHoward Lindsay and Russel Crouse. It is based on the memoir of Maria von Trapp, The Story of the Trapp Family Singers. Set in Austria on the eve of the Anschluss in 1938, the musical tells the story of Maria, who takes a job as governess to a large family while she decides whether to become a nun. She falls in love with the children, and eventually their widowed father, Captain von Trapp. He is ordered to accept a commission in the German navy, but he opposes the Nazis. He and Maria decide on a plan to flee Austria with the children. Many songs from the musical have become standards, such as "Edelweiss", "My Favorite Things", "Climb Ev'ry Mountain", "Do-Re-Mi", and the title song "The Sound of Music".

The original Broadway production, starring Mary Martinand Theodore Bikel, opened in 1959[1] and won five Tony Awards, including Best Musical, out of nine nominations. The first London production opened at the Palace Theatre1961. The show has enjoyed numerous productions and revivals since then. It was adapted as a 1965 film musicalstarring Julie Andrews and Christopher Plummer, which won five Academy Awards. The Sound of Music was the last musical written by Rodgers and Hammerstein; Oscar Hammerstein died of cancer nine months after the Broadway premiere.

After viewing The Trapp Family, a 1956 West German film about the von Trapp family, and its 1958 sequel (Die Trapp-Familie in Amerika), stage director Vincent J. Donehue thought that the project would be perfect for his friend Mary Martin; Broadway producers Leland Hayward and Richard Halliday (Martin's husband) agreed.[2] The producers originally envisioned a non-musical play that would be written byLindsay and Crouse and that would feature songs from the repertoire of the Trapp Family Singers. Then they decided to add an original song or two, perhaps by Rodgers and Hammerstein. But it was soon agreed that the project should feature all new songs and be a musical rather than a play.[3]

Details of the history of the von Trapp family were altered for the musical. The real Georg von Trapp did live with his family in a villa in Aigen, a suburb of Salzburg. He wrote to the Nonnberg Abbey in 1926 asking for a nun to help tutor his sick daughter, and the Mother Abbess sent Maria. His wife had died in 1922. The real Maria and Georg married at the Nonnberg Abbey in 1927. Lindsay and Crouse altered the story so that Maria was governess to all of the children, whose names and ages were changed, as was Maria's original surname (the show used "Rainer" instead of "Kutschera"). The von Trapps spent some years in Austria after Maria and the Captain married and was offered a commission in Germany's navy. Since Von Trapp opposed the Nazis by that time, the family left Austria after the Anschluss, going by train to Italy and then traveling on to London and the United States.[4] To make the story more dramatic, Lindsay and Crouse had the family, soon after Maria's and the Captain's wedding, escape over the mountains to Switzerland on foot.