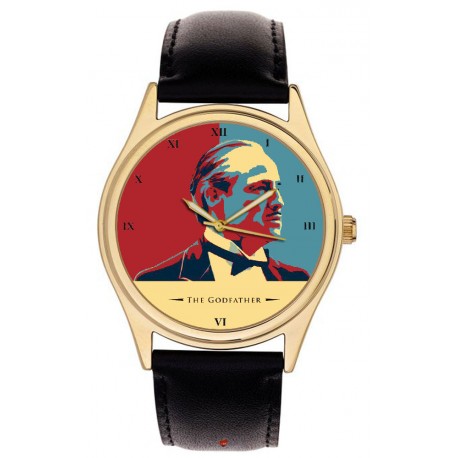 The Godfather is a 1972 American crime film directed by Francis Ford Coppola and produced by Albert S. Ruddy, based on Mario Puzo's best-selling novel of the same name. It stars Marlon Brando and Al Pacino as the leaders of a fictional New York crime family. The story, spanning 1945 to 1955, chronicles thefamily under the patriarch Vito Corleone, focusing on the transformation of Michael Corleone (Pacino) from reluctant family outsider to ruthless mafia boss.

Paramount Pictures obtained the rights to the novel before it gained popularity for the price of $80,000. Studio executives had trouble finding a director, as their first few candidates turned down the position. They and Coppola disagreed over who would play several characters, in particular Vito and Michael. Filming was done on location and completed earlier than scheduled. The musical score was composed primarily by Nino Rota with additional pieces byCarmine Coppola.

The film was the highest-grossing film of 1972 and was for a time the highest-grossing film ever made. It won the Oscars for Best Picture, Best Actor (Brando) and Best Adapted Screenplay (for Puzo and Coppola). Its seven other Oscar nominations included Pacino, James Caan, and Robert Duvall for Best Supporting Actor and Coppola for Best Director. It was followed by sequels The Godfather Part II (1974) and The Godfather Part III (1990).

The Godfather is widely regarded as one of the greatest films in world cinema and one of the most influential, especially in the gangster genre. It was selected for preservation in the U.S. National Film Registry of the Library of Congress in 1990, being deemed "culturally, historically, or aesthetically significant" and is ranked the second-greatest film in American cinema (behind Citizen Kane) by the American Film Institute.

In 1945, at his daughter Connie's wedding, Vito Corleone hears requests in his role as the Godfather, the Don of a New York crime family. Vito's youngest son, Michael, who was a Marine during World War II, introduces his girlfriend, Kay Adams, to his family at the reception. Johnny Fontane, a famous singer and godson to Vito, seeks Vito's help in securing a movie role; Vito dispatches his consigliere, Tom Hagen, to Los Angeles to talk the obnoxious studio head, Jack Woltz, into giving Johnny the part. Woltz refuses until he wakes up in bed with the severed head of his prized stallion.

Shortly before Christmas, drug baron Virgil "The Turk" Sollozzo, backed by the Tattaglia crime family, asks Vito for investment in his narcotics business and protection through his political connections. Wary of involvement in a dangerous new trade that risks alienating political insiders, Vito declines. Suspicious, Vito sends his enforcer, Luca Brasi, to spy on them. However, a Tattaglia button man garrotes Brasi during Brasi's first meeting with Bruno Tattaglia and Sollozzo. Later Sollozzo has Vito gunned down in the street, then kidnaps Hagen. With Corleone first-born Sonny in command, Hagen is pressured to persuade Sonny to accept Sollozzo's deal, then released. The family receives fish wrapped in Brasi's bullet-proof vest, indicating that Luca "sleeps with the fishes." Vito survives, and at the hospital Michael thwarts another attempt on his father; Michael's jaw is broken by NYPD Captain Marc McCluskey, Sollozzo's bodyguard. Sonny retaliates with a hit on Tattaglia's son. Michael plots to murder Sollozzo and McCluskey: on the pretext of settling the dispute, Michael agrees to meet them in a Bronx restaurant. There, retrieving a planted handgun, he kills both men.

Despite a clampdown by the authorities, the Five Families erupt in open warfare and Vito's sons fear for their safety. Michael takes refuge in Sicily, and his brother, Fredo, is sheltered by the Corleone's Las Vegas casino partner, Moe Greene. Sonny attacks his brother-in-law Carlo on the street for abusing his sister and threatens to kill him if it happens again. When it does, Sonny speeds to their home, but is ambushed at a highway toll booth and riddled with submachine gun fire. While in Sicily, Michael meets and marries Apollonia Vitelli, but a car bomb intended for him takes her life.

Devastated by Sonny's death, Vito moves to end the feuds. Realizing that the Tattaglias are controlled by the now-dominant Don Emilio Barzini, Vito assures the Five Families that he will withdraw his opposition to their heroin business and forgo avenging his son's murder. His safety guaranteed, Michael returns home to enter the family business and marry Kay, who gives birth to two children by the early 1950s.

With his father at the end of his career and his brother too weak, Michael takes the family reins, promising his wife the business will be legitimate within five years. To that end, he insists Hagen relocate to Las Vegas and relinquish his role to Vito because Tom is not a "wartime consigliere"; Vito agrees Tom should "have no part in what will happen" in the coming battles with rival families. When Michael travels to Las Vegas to buy out Greene's stake in the family's casinos, their partner derides the Corleones for being run out of New York; Michael is dismayed to see that Fredo has fallen under Greene's sway.

Vito suffers a fatal heart attack. At the funeral, Tessio, a Corleone capo, asks Michael to meet with Don Barzini, signalling the betrayal that Vito had forewarned. The meeting is set for the same day as the christening of Connie’s baby. While Michael stands at the altar as the child's godfather, Corleone assassins murder the other New York dons and Moe Greene. Tessio is executed for his treachery and Michael extracts Carlo’s confession to his complicity in setting up Sonny's murder for Barzini. A Corleone capo, Clemenza, garrotes Carlo with a wire. Connie accuses Michael of the murder, telling Kay that Michael ordered all the killings. Kay is relieved when Michael finally denies it, but, when the capos arrive, they address her husband as Don Corleone, and she watches as they close the door on her.