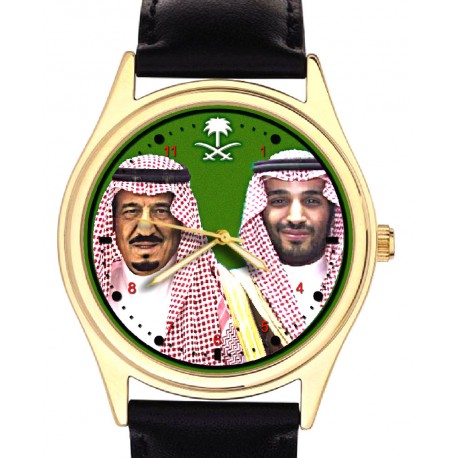 Mohammad bin Salman Al Saud (Arabic: محمد بن سلمان بن عبد العزيز آل سعود‎‎; born 31 August 1985 in Jeddah) is the deputy crown prince of Saudi Arabia and the youngest minister of defense in the world.[1] Mohammad is also chief of the House of Saud royal court, and chairman of the Council for Economic and Development Affairs. He has been described as the power behind the throne of his father, King Salman.

Mohammad bin Salman Al Saud was born on 31 August 1985 in Jeddah.[3][4][note 1] He is the son of King Salman from his third spouse,[6] Fahda bint Falah bin Sultan Al Hithalayn.[7] He is their eldest son[6] and is full brother of Turki bin Salman, former chairman of the Saudi Research and Marketing Group.[7] Prince Mohammad holds a bachelor degree in law from King Saud University.[8]

After graduating college, Mohammad bin Salman spent several years in the private sector before becoming the personal aide of his father. He worked as a consultant for the Experts Commission, working for the Saudi Cabinet.[9]

On 15 December 2009, Mohammad bin Salman entered politics as a special advisor to his father when the latter was the governor of Riyadh Province.[10] At this time, the prince began to collect titles and sinecure positions such as secretary-general of the Riyadh Competitive Council, special advisor to the chairman of the board for the King Abdulaziz Foundation for Research and Archives, and a member of the board of trustees for Albir Society in the Riyadh region.[11]

Chief of the Court

On 23 January 2015, King Abdullah died, Salman took the throne and Prince Mohammad was appointed minister of defense.[16] He was also named as the secretary general of the Royal Court on the same date.[17] In addition he retained his post as the minister of the state.[18][19]

The first major event in his tenure as defense minister was Operation Decisive Storm, part of the Saudi Arabian-led intervention in Yemen, an operation against Houthi rebels in Yemen, experiencing the 2015 Yemeni Civil War.[20] Prince bin Salman launched the invasion in March 2015, without fully coordinating across security services, and without informing National Guard Minister Prince Mutaib bin Abdullah, who was out of the country.[21] During the campaign Prince bin Salman went on vacation in theMaldives, where United States Secretary of Defense Ash Carter had trouble reaching him for days.[21] According to the UN and human rights groups, direct war crimes were committed during the conflict.[22][23][24]

In late 2015, Prince bin Salman attended a meeting between King Salman and United States President Barack Obama, where the prince broke protocol to deliver a monologue criticizing U.S. foreign policy.[21] After Prince bin Salman announced an anti-terrorist military alliance of Islamic countries in December 2015, some of the countries involved said they had not been consulted.[21]

On 4 January 2016, Prince Mohammad gave his first on-the-record interview, while talking to The Economist.[25]

On 10 January 2016, The Independent reported that "the BND, the German intelligence agency ... portrayed Saudi defence minister and Deputy Crown Prince Mohammed bin Salman ... as a political gambler who is destabilising the Arab world through proxy wars in Yemen and Syria."[26]

As defence minister, Bin Salman has been heavily involved in the Saudi Arabian-led intervention in Yemen. According to the New York Times: "The prosecution of the war by a prince with no military experience has exacerbated tensions between him and his older cousins, according to American officials and members of the royal family. Three of Saudi Arabia’s main security services are run by princes. Although all agreed that the kingdom had to respond when the Houthis seized the Yemeni capital and forced the government into exile, Prince bin Salman took the lead, launching the war in March 2015 without full coordination across the security services. The head of the National Guard, Mutaib bin Abdullah, had not been informed and was out of the country when the first strikes were carried out, according to a senior National Guard officer. American officials, too, were put off when, just as the Yemen campaign was escalating, Prince bin Salman took a vacation in the Maldives, the island archipelago off the coast of India. Several American officials said Defense Secretary Ash Carter had trouble reaching him for days during one part of the trip."[27]

On 29 January 2015 Prince Mohammad was named the chair of the newly established Council for Economic and Development Affairs,[28] replacing the disbanded Supreme Economic Commission.[28] Prince bin Salman was given control over Saudi Aramco by royal decree 48 hours being appointed deputy crown prince.[29]

Prince bin Salman's stated concern in 2015/2016 was to reform Saudi's economy towards a more diversified and privatized structure. His reform blueprint, "Vision 2030,"[30]details goals and measures in various fields, from developing non-oil revenues and privatization of the economy to e-government and sustainable development.[31] He recognized that this economic transformation won’t be possible without easing Saudi Arabia’s strict Islamic traditions. "Vision 2030," offers a commitment: "Our vision is a tolerant country with Islam as its constitution and moderation as its method." In an interview with Al arabia he also shared his idea for "Green cards" for non-Saudis foreigners.[32]

Prince bin Salman has successfully lobbied for regulations restricting the powers of the religious police.[21] Prince bin Salman established an entertainment authority that has hosted comedy shows, pro wrestling events, and monster truck rallies.[21] A few hours after spotting a 440-foot luxury yacht in 2015, Prince bin Salman purchased it from Stolichnaya owner Yuri Shefler for 500 million euros.[21] In 2016 Prince Mohammad was technically the country’s No. 3 official and able to act in the name of his father, King Salman, who suffers from mild dementia.[33]

The first measures undertook in April 2016 include new taxes and subsidies cut, a diversification plan, the creation of a $2 trillion Saudi sovereign wealth fund, and a series of strategic economic reforms called the National Transformation Programme.[34] Prince bin Salman plans to raise capital for the sovereign wealth fund by selling off shares of Saudi Aramco.[29]

Mohammad bin Salman established himself as the chairman of the Prince Mohammed bin Salman Foundation, otherwise known as MiSK, whose aim is to help disadvantaged youth.[18] The Foundation has been partner of the 9th UNESCO Youth Forum for Change in 2015.[35] The Foundation focuses on the country’s youth and provides different means of fostering talent, creative potential, and innovation in a healthy environment that points the way toward opportunities in the arts and sciences. The Foundation pursues these goals by both establishing programs and partnering with local and global organizations in diverse fields. Through a variety of incubators, it is helping to develop intellectual capital and unlock the potential of all Saudi people.[36] Prominent Saudi journalists who traveled with Prince Mohammed on foreign delegations have been given up to $100,000 in cash