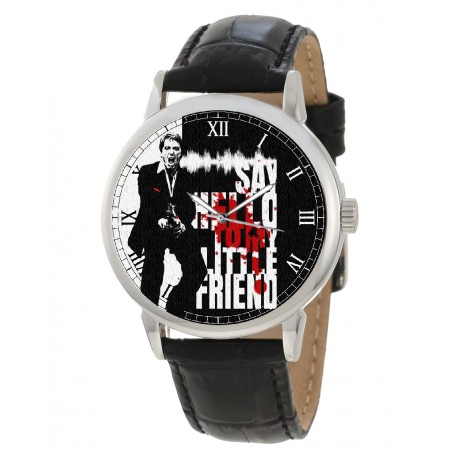 Scarface is a 1983 American crime film directed by Brian De Palma and written by Oliver Stone,[4] a remake of the 1932 film of the same name.[5] The film tells the story of Cuban refugee Tony Montana (Al Pacino) who arrives in 1980s Miami with nothing and rises to become a powerful drug kingpin. The cast also features Mary Elizabeth Mastrantonio, Steven Bauer, and Michelle Pfeiffer.[4]

Scarface was released on December 9, 1983 and was a box office success, grossing $44 million. Initial critical reception was mixed, with criticism over excessive violence and profanity and graphic drug usage. Some Cuban expatriates in Miami objected to the film's portrayal of Cubans as criminals and drug traffickers.

In the years that followed, the film has received reappraisal from critics, considered by some to be one of the best mob films ever made and in general. Screenwriters and directors such as Martin Scorsese have praised the film, which has been referenced extensively in rap music, comic books, and video games.

In 1980, Cuban refugee Antonio "Tony" Montana (Al Pacino) arrives in Miami, Florida, where he is sent to a refugee camp with his best friend Manny Ribera (Steven Bauer) and their associates Angel (Pepe Serna) and Chi-Chi (Ángel Salazar). The four are released from the camp in exchange for assassinating a former Cuban government official at the request of wealthy drug dealer Frank Lopez (Robert Loggia), and they are given green cards. They become dishwashers in a diner.

Frank's henchman Omar Suarez (F. Murray Abraham) gives the group the opportunity to purchase cocaine from Colombian dealers, but the deal collapses. Angel is dismembered with a chainsaw, while Manny and Chi-Chi rescue Tony and kill the Colombians. Suspecting that Omar betrayed them, Tony and Manny insist on personally delivering the recovered drugs and money to Frank. During their meeting, Tony is attracted to Frank's girlfriend Elvira Hancock (Michelle Pfeiffer). He and Manny are hired to work for Frank.

Months later, Tony visits his mother Georgina (Míriam Colón) and younger sister Gina (Mary Elizabeth Mastrantonio), of whom he is fiercely protective. Disgusted by his life of crime, Georgina throws Tony out. Manny comments on Gina's beauty before being warned by Tony to stay away from her. Frank sends Tony and Omar to Bolivia to meet with cocaine kingpin Alejandro Sosa (Paul Shenar). Tony negotiates a deal without Frank's approval, angering Omar, who leaves to contact Frank. Sosa claims that Omar is a police informant and then has Tony witness as a beaten Omar is hanged from a helicopter. Tony vouches for Frank's organization, so Sosa agrees to the deal, parting with a warning that Tony should never betray him.

Back in Miami, Frank is infuriated by Omar's demise and the unauthorized deal struck by Tony, prompting Tony to establish his own organization. At a nightclub, corrupt detective Mel Bernstein (Harris Yulin) attempts to extort money from Tony in return for police protection and information. Tony angers Frank further by openly pursuing Elvira in the club. Gina is also there, and Tony notices her dancing and being groped by a man. Hit men attempt to assassinate Tony, but he escapes from the club. Tony, Manny, and Chi-Chi go to Frank's office, certain that his former boss sent both Bernstein and the assassins. At gunpoint, Frank confesses to his involvement and begs for his life, but he and Bernstein are killed.

Tony marries Elvira and becomes the dealer of Sosa's supplies. He builds a multimillion-dollar empire, living in a vast, heavily guarded estate. By 1983, however, Tony becomes paranoid as he and Elvira excessively consume cocaine. His money launderer demands a greater percentage, while Manny grows resentful of Tony taking sole credit for their success. A sting by federal agents results in Tony being charged with money laundering and tax evasion. Sosa offers to use his government connections to keep Tony out of jail, but only if Tony first assassinates a journalist intending to expose Sosa. Later, Tony pushes Manny and Elvira further away by publicly blaming the former for his arrest and the latter of being infertile because of her excessive drug use. He travels without them to New York City, where Sosa's henchman, Alberto, plants a bomb on the journalist's car. However, the intended victim is unexpectedly accompanied by his wife and children, so Tony calls off the mission. Alberto insists on continuing, but Tony kills him.

Tony goes looking for Manny and Gina who are now married. After killing Manny, Tony returns to his mansion, where he buries his face in a large mound of cocaine. While Sosa's men invade the mansion and kill Tony's men, a drugged Gina accuses Tony of wanting her for himself and wounds him. One of Sosa's men then kills her and is killed by Tony. After failing to open the door for Chi-Chi who is killed upon arrival, Tony turns a grenade-launcher-equipped M-16 on Sosa's men, mowing down many. Tony is repeatedly shot, but continues to fight until he is fatally shot from behind with a shotgun. His body falls into a fountain below, in front of a statue reading "The World is Yours."