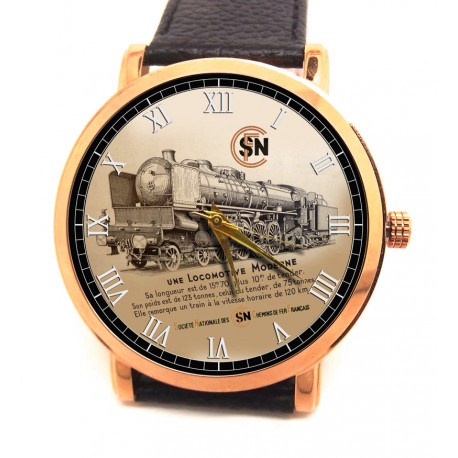 A locomotive or engine is a rail transport vehicle that provides the motive power for a train. The word originates from the Latin loco – "from a place", ablative of locus, "place" + Medieval Latin motivus, "causing motion", and is a shortened form of the term locomotive engine,[1] first used in the early 19th century to distinguish between mobile and stationary steam engines.

A locomotive has no payload capacity of its own, and its sole purpose is to move the train along the tracks.[2] In contrast, some trains have self-propelled payload-carrying vehicles. These are not normally considered locomotives, and may be referred to as multiple units, motor coaches or railcars. The use of these self-propelled vehicles is increasingly common for passenger trains, but rare for freight (see CargoSprinter). Vehicles which provide motive power to haul an unpowered train, but are not generally considered locomotives because they have payload space or are rarely detached from their trains, are known as power cars.

Traditionally, locomotives pulled trains from the front. However, push-pull operation has become common, where the train may have a locomotive (or locomotives) at the front, at the rear, or at each end. 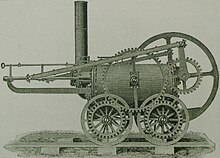 Prior to locomotives, the motive force for railroads had been generated by various lower-technology methods such as human power, horse power, gravity or stationary engines that drove cable systems.

The first successful locomotives were built by Cornish inventor Richard Trevithick. In 1804 his unnamed steam locomotive hauled a train along the tramway of thePenydarren ironworks, near Merthyr Tydfil in Wales. Although the locomotive hauled a train of 10 long tons (11.2 short tons; 10.2 t) of iron and 70 passengers in five wagons over nine miles (14 km), it was too heavy for the cast iron rails used at the time. The locomotive only ran three trips before it was abandoned. Trevithick built a series of locomotives after the Penydarren experiment, including one which ran at a colliery in Tyneside in northern England, where it was seen by the young George Stephenson.[3]

The first commercially successful steam locomotive was Matthew Murray's rack locomotive, Salamanca, built for the narrow gauge Middleton Railway in 1812. This was followed in 1813 by the Puffing Billy built by Christopher Blackett and William Hedley for the Wylam Colliery Railway, the first successful locomotive running by adhesiononly. Puffing Billy is now on display in the Science Museum in London, the oldest locomotive in existence.[4]

In 1814 George Stephenson, inspired by the early locomotives of Trevithick and Hedley persuaded the manager of the Killingworth colliery where he worked to allow him to build a steam-powered machine. He built the Blücher, one of the first successful flanged-wheel adhesion locomotives. Stephenson played a pivotal role in the development and widespread adoption of steam locomotives. His designs improved on the work of the pioneers. In 1825 he built the Locomotion for the Stockton and Darlington Railway, north east England, which became the first public steam railway. In 1829 he built The Rocketwhich was entered in and won the Rainhill Trials. This success led to Stephenson establishing his company as the pre-eminent builder of steam locomotives used on railways in the United Kingdom, the United States and much of Europe.[5] The first inter city passenger railway, Liverpool and Manchester Railway, opened in 1830, making exclusive use of steam power for both passenger and freight trains. 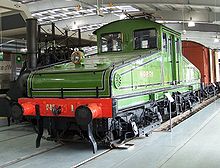 There are a few basic reasons to isolate locomotive train power, as compared to self-propelled vehicles.[6]

Ease
Whether out of necessity to replace the locomotive due to failure, or for reason of needing to maintain the power unit, it is relatively easy to replace the locomotive with another, while not removing the entire train from service.
Maximum utilization of power cars
Separate locomotives facilitate movement of costly motive power assets as needed; thereby avoiding the expense associated with tied up or idle power resources.
Flexibility
Large locomotives can substitute for small locomotives when more power is required, for example, where grades are steeper. As needed, a locomotive can be used for either freight duties, or passenger service.
Obsolescence cycles
Separating motive power from payload-hauling cars enables replacement without affecting the other. To illustrate, locomotives might become obsolete when their associated cars did not, and vice versa.
Safety
In an accident, the locomotive may act as a buffer zone to the rest of the train. Depending on the obstacle encountered on the rail line, the heavier mass of a locomotive is less likely to deviate from its normal course. In the event of fire, it might be safer, for example, with diesel locomotives.
Noise
A single source of tractive power (i.e., motors in one place), is quieter than multiple operational power units, where one or more motors are located under every carriage. The noise problem is particularly noticeable in diesel multiple units.
Saves time
The motive power accompanies the cars to be hauled and consequently there is a saving in time.
Maintenance
Especially for steam locomotives but also for other types, maintenance facilities can be very dirty environments and it is advantageous not to have to take passenger accommodation into the same depot. This was one reason for the demise of the GWR steam railmotors.

There are several advantages of multiple unit (MU) trains compared to locomotives.

Energy efficiency
Multiple units are more energy efficient than locomotive-hauled trains and more nimble, especially on down grades, as much more of the train's weight (sometimes all of it) is placed on driven wheels, rather than suffering the dead weight of unpowered coaches.
No need to turn the locomotive
Many multiple units have cabs at both ends; therefore, the train may be reversed without uncoupling/re-coupling the locomotive, providing quicker turnaround times, reduced crew costs, and enhanced safety. In practice, the development of driving van trailers and cab cars has removed the need for locomotives to run-around, giving easy bi-directional operation and removing this MU advantage.
Reliability
Multiple unit trains have multiple engines, where the failure of one engine usually does not prevent the train from continuing on its journey. A locomotive drawn passenger train typically has only a single power unit; the failure of this single unit temporarily disables the train. However, as is often the case with locomotive hauled freight trains, some passenger trains utilize multiple locomotives, and are thus able to continue at reduced speed after the failure of one locomotive.

Locomotives may generate their power from fuel (wood, coal, petroleum or natural gas), or they may take power from an outside source of electricity. It is common to classify locomotives by their source of energy. The common ones include:

The main components of a steam locomotive 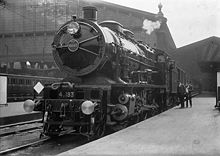 The all-time speed record for steam trains is held by an LNER Class A4 4-6-2 Pacific locomotive of the LNER in the United Kingdom, number 4468 Mallard, which pulling six carriages (plus a dynamometer car) reached 126 mph (203 km/h) on a slight downhill gradient down Stoke Bank on 3 July 1938.[10] Aerodynamic passenger locomotives in Germany attained speeds very close to this and due to the difficulties of adequately balancing and lubricating the running gear, this is generally thought to be close to the practicable limit for a direct-coupled steam locomotive.[11]

Before the middle of the 20th century, electric and diesel-electric locomotives began replacing steam locomotives. Steam locomotives are less efficient than their more modern diesel and electric counterparts and require much greater manpower to operate and service.[12] British Rail figures showed the cost of crewing and fuelling a steam locomotive was some two and a half times that of diesel power, and the daily mileage achievable was far lower. As labour costs rose, particularly after the second world war, non-steam technologies became much more cost-efficient.[citation needed] By the end of the 1960s–1970s, most western countries had completely replaced steam locomotives in passenger service. Freight locomotives generally were replaced later. Other designs, such as locomotives powered by gas turbines, have been experimented with, but have seen little use, mainly due to high fuel costs.

By the end of the 20th century, almost the only steam power remaining in regular use in North America and Western European countries was on heritage railways. These were largely aimed at tourists and/or railroad hobbyists, known as 'railfans' or 'railway enthusiasts'. An exception are the narrow gauge lines in Germany, which form part of the public transport system, running to all-year-round timetables. These railways retain steam for all or part of their motive power. Steam locomotives remained in commercial use in parts of Mexico into the late 1970s. Steam locomotives were in regular use until 2004 in the People's Republic of China, where coal is a much more abundant resource than petroleum for diesel fuel. India switched over from steam-powered trains to electric and diesel-powered trains in the 1980s, except heritage trains. In some mountainous and high altitude rail lines, steam engines remain in use because they are less affected by reduced air pressure than diesel engines.[citation needed] Steam locomotives remained in routine passenger use in South Africa until the late 1990s, but are now reserved to tourist trains. In Zimbabwe steam locomotives are still used on shunting duties around Bulawayo and on some regular freight services. 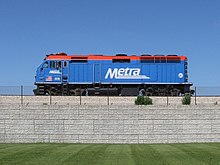 The first true diesel-powered locomotives were not built until after Dr. Diesel's patents expired in 1912, but a number of successful oil engine locomotives were produced before then. The first of these was built in 1894 by the Priestman Brothers of Hull. This standard gauge locomotive was built using a 12 hp double-acting marine type engine, running at 300 rpm, mounted on a 4-wheel wagon chassis. It was only able to haul one loaded wagon at a time, due to its low power output, and was not a great success.[14]

The first successful oil engine locomotives were a series of narrow gauge locomotives built by Richard Hornsby & Sons Ltd. between 1896 and 1903. These were built for use by the British military. The first of these was Works Number 1705, delivered to the 18 in (457 mm) gauge Woolwich Arsenal railway on 23rd. July 1896. Three further locomotives of similar design were delivered to Woolwich between 1900 and 1902.

Experimental diesel-powered locomotives were first built just after World War I. In the 1940s, they began to displace steam power on American railroads. Following the end of World War II, diesel power began to appear on railroads in many countries. The significantly better economics of diesel operation triggered a dash to diesel power, a process known as Dieselization. By the late 1960s, few major railroads in North America, Europe and Oceania continued to operate steam locomotives, although significant numbers still existed outside these areas.

As is the case with any vehicle powered by an internal combustion engine, diesel locomotives require a power transmission system to couple the output of the prime mover to the driving wheels. In the early days of diesel railroad propulsion development, electric, hydraulic and mechanical power transmission systems were all employed with varying degrees of success. Of the three, electric transmission has proven the most popular, and although diesel-hydraulic locomotives have certain advantages and continue to be used in some European countries, most modern Diesel-powered locomotives are diesel-electric.