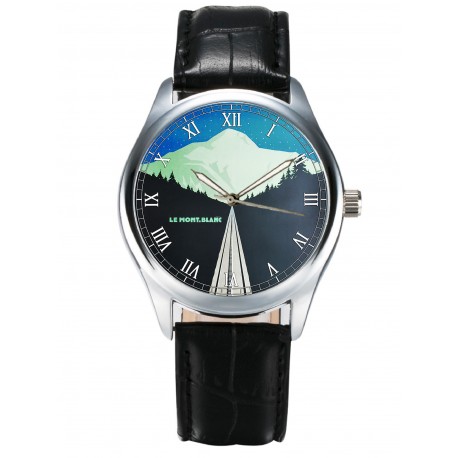 Mont Blanc (French: Mont Blanc [mɔ̃ blɑ̃]; Italian: Monte Bianco [ˈmonte ˈbjaŋko], both meaning "white mountain") is the highest mountain in the Alps and Western Europe, rising 4,808 m (15,774 ft) above sea level. It is the second-highest and second most prominent mountain in Europe, after Mount Elbrus, and it is the eleventh most prominent mountain summit in the world.[3] The mountain stands between the regions of Aosta Valley, Italy, and Savoie and Haute-Savoie, France. It gives it name to the Mont Blanc massif, which itself forms part of a larger range referred to as the Graian Alps. The location of the summit of Mont Blanc is on the watershed line between the valleys of Ferret and Veny in Italy and the valleys of Montjoie, and Arve in France, on the border between the two countries. Ownership of the summit area has long been a subject of historical dispute between the two countries.

The Mont Blanc massif is popular for outdoor activities like hiking, climbing, trail running and winter sports like skiing, and snowboarding. The most popular climbing route to the summit of Mont Blanc is the Goûter Route, which typically takes two days.

The three towns and their communes which surround Mont Blanc are Courmayeur in Aosta Valley, Italy; and Saint-Gervais-les-Bains and Chamonix in Haute-Savoie, France. The latter town was the site of the first Winter Olympics. A cable car ascends and crosses the mountain range from Courmayeur to Chamonix, through the Col du Géant. The 11.6 km (7 1⁄4-mile) Mont Blanc Tunnel, constructed between 1957 and 1965, runs beneath the mountain and is a major trans-Alpine transport route.