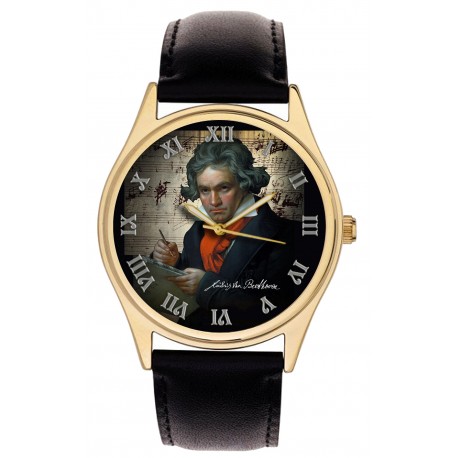 Ludwig Van Beethoveen was born in 1770 in Bonn, Germany as the son of a court musician. His talent for the piano was soon realized and he gave his first public performance at the age of eight. Beethoven's father wanted to promote him as the next child prodigy, another Mozart. (This most surely led to Beethoven's absolute distaste for child prodigies later in his life.) Nevertheless, Beethoven was employeed as a court musician in Bonn from 1787. During this time he studied briefly under both Haydn and Mozart, although it was certainly not a satisfying relationship for Beethoven. It turns out that events in Beethoven's life greatly affected (or seem to have affected) him writing. Because of this Beethoven's musical output is very episodic. As we shall see, there are three main periods in Beethoven's life, known simply as the early, middle, and late periods.

In 1792, Beethoven relocated to Vienna. This is the beginning of his early period which lasted rougly until 1800. During this time Beethoven quickly made a name for himself as a virtuoso pianist. He used his abilities at the piano to gain favor with the nobility. In fact, he even tried to claim his own noble roots by accidentially changing the Van (a meaningless title) to Von (a title of nobility). His compositions during this period consisted mainly of works for his main instrament, the piano. An example of a piece composed during this time is the Pathétique Sonata, Op. 13 (1798). Beethoven's hearing was also beginning to deteriotate at this point, however, he went to great lengths to hide this fact from those around him. A picture of the apparatus used by Beethoven to hear is pictured below.

Beethoven is a transistion figure in the history of western music. He is generally known as the father of the Romantic era. However, during the first period most of his compositions were classical (ie Hadyn and Mozart) in nature.

However, in 1800 Beethoven is reported to have turned his friend Krumpholz and said, "I am not very well satisfied with the work I have thus far done. From this day on I shall take a new way." And basically, he did. Beethoven abandoned the classical forms of the previous century and set out for a more expressive (Romantic) musical voice. His musical imagination began to grow beyond that of the piano. This period, which later became known as the Heroic Period because of the larger than life nature that his compositions took on, saw the creations of such masterpieces as the Tempest Sonata, Op. 31 (1801-2), the 3rd Symphony (Eroica), Op. 55 (1803), his only opera, Fidelio, Op. 72 (1803-5), and the 5th Piano Concerto (Emperor), Op. 73 (1809). Some say that this middle period was Beethoven's greatest. It certainly was his most productive. In about a decade Beethoven produced countless masterpieces in every genre.

In 1809, however, his musical output began to drop, possibly in connection to his declining health and mental state. Around 1815 the famous Immortal Beloved affair occured which left Beethoven in deep depression and contemplating suicide. Although there has been much debate over the identity of this Immortal Beloved character, it is now assumed that the lucky woman was Josephine, Countess Deym, née Countess von Brunswick whose picture is shown below.

Beethoven's output was mostly null until 1818. At this point he was completely deaf and slightly mad. Also his brother died leaving Beethoven's only nephew, Karl, in the guardianship of his mother. Now Beethoven felt that she was not fit to raise Karl, so he entered into a vicious lawsuit over custody of the child. For the most part he was able to use his influence with the aristocracy to win the battle. Unfortunately Beethoven was not a fit father and his relationship with Karl was quite poor, driving him to an suicide attempt a few years later. Beethoven loved Karl dearly, and the pain of his failed attempts to teach Karl music must have been devestating for Beethoven. It's often spectulated that Karl was probably a strong contributor to Beethoven's late style. The late period saw the compositions of Beethoven's largest works: the Mass in D (Missa Solemnis), Op. 123 (1818-23), the 9th Symphony (Choral), Op. 125 (1818-23), the Hammerklavier Sonata, Op. 106 (1818), and the late string quartets.

It is relevant at this time to include a few words about Beethoven's compositional processes. Mozart was able to get on a train, a few hours later get off with a whole opera composed in his head. Beethoven couldn't do that. In fact every phrase, every note was like pulling teeth. Beethoven never had less than one composition going on at the same time. He used sketch books to write down his ideas when they flew into his head, before he forgot them. Even after he had an idea, he had to work it out just right. What resulted was a mess of erasures and scribbles on a piece of paper that a copyist would later havet to decipher. One look at the page below from his sketches on the Missa Solemnis and one wonders how the music ever made it out.