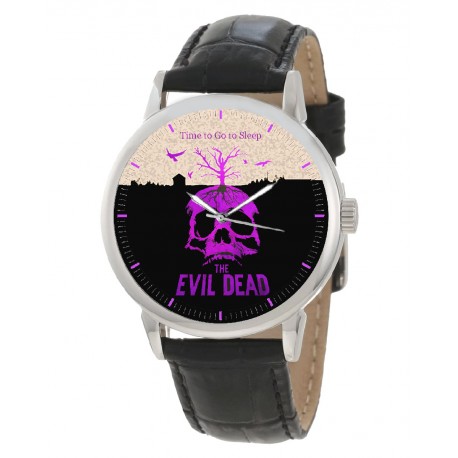 The Evil Dead is a 1981 American supernatural horror film written and directed by Sam Raimi and executive produced by Raimi and Bruce Campbell, who also stars alongside Ellen Sandweiss and Betsy Baker. The film focuses on five college students vacationing in an isolated cabin in a remote wooded area. After they find an audiotape that releases a legion of demons and spirits, members of the group suffer from demonic possession, leading to increasingly gory mayhem. Raimi and the cast produced the short film Within the Woods as a "prototype" to build the interest of potential investors, which secured Raimi US$90,000 to produce The Evil Dead. The film was shot on location in a remote cabin located in Morristown, Tennessee, in a difficult filming process that proved extremely uncomfortable for the majority of the cast and crew.

The low-budget horror film attracted the interest of producer Irvin Shapiro, who helped screen the film at the 1982 Cannes Film Festival. Horror author Stephen King gave a rave review of the film, which helped convince New Line Cinema to serve as its distributor. Though a meager commercial success in the United States, the film made its budget back through worldwide distribution, and grossed $2.4 million during its theatrical run. Both early and later critical reception were universally positive and in the years since its release, The Evil Dead has developed a reputation as one of the largest cult films and has been cited among the greatest horror films of all time. The Evil Dead launched the careers of Campbell and Raimi, who would collaborate on several films together throughout the years, including Raimi's Spider-Man trilogy.

The film has spawned a media franchise, beginning with two sequels written and directed by Raimi, Evil Dead II (1987) and Army of Darkness (1992), as well as video games, comic books, and a television series. The film's protagonist Ash Williams (Campbell) is regarded as a cult icon. The fourth film, serving as a reboot, a remake, and a sequel, was titled Evil Dead and was released in 2013. Raimi co-produced the film alongside Campbell and the franchise producer,Robert Tapert. As with the other films, the follow-up television series Ash vs Evil Dead was created and produced by Sam and Ivan Raimi, with Campbell also executive producing.

Five Michigan State University students — Ash Williams (Bruce Campbell), his girlfriend Linda (Betsy Baker), Ash's sister Cheryl (Ellen Sandweiss), their friend Scotty, and his girlfriend Shelly—venture into rural Tennessee to vacation in an isolated cabin for their spring break. They soon run into trouble, with Scotty nearly colliding with a truck, then barely getting the group to safety when the bridge leading to the cabin starts to collapse. That night, while Cheryl is sketching an old clock, her hand becomes possessed, causing her to draw a picture that looks like a book with a deformed, evil face. Unsure of what to do, she decides not to mention the incident to the others.

When the trapdoor to the cellar mysteriously flies open during dinner, Ash and Scotty go down to investigate and find the Naturom Demonto, a Sumerian version of the Egyptian Book of the Dead, along with a tape recorder belonging to the archeologist who owned it. When Scotty plays it, the archeologist's voice recites a series of incantations, resurrecting a mysterious, demonic entity. Cheryl becomes increasingly hysterical and locks herself in her room. Later, she hears strange voices and goes outside to investigate. She is attacked and raped by demonically possessed trees, but manages to escape. Unable to convince the others of what happened, she asks Ash to take her into town for the night. However, Ash soon discovers that the bridge has been destroyed. Back at the cabin, Ash listens to more of the tape, learning that the only way to kill the entity is to dismember it when it possesses a host. Cheryl succumbs to the entity and attacks the others, stabbing Linda in the ankle with a pencil before Scotty is able to force her into the cellar.

Shelly becomes possessed as well, forcing Scotty to chop up her body with an axe and bury the remains. Shaken by the experience, he leaves to find a way back to town. When Ash goes to check on Linda, he is horrified to find that she has already begun to turn. A badly-injured Scotty staggers into the cabin and dies of his wounds, having been attacked by the trees. While Ash tries to figure out what to do, both Linda and Cheryl pretend to be cured, only to quickly revert to their demonic forms. Ash locks Linda outside, but she returns and tries to stab him before he impales her with a dagger. He tries to cut up her remains with a chainsaw, but ends up burying her instead. When she escapes again, he finally manages to decapitate her with a shovel and her headless body tries to rape him before escaping. Back in the cabin, he quickly realizes that Cheryl has forced open the trapdoor. After wounding her with a shotgun, he heads to the basement for more ammunition. There, the entity tortures him by dousing him with blood from a pipe, while more blood seeps from the walls and ceilings.

Scotty is revived as a demon and attacks Ash when he goes back upstairs, while Cheryl savagely beats him with a fireplace poker. Ash gets his hands on the book and throws it into the fireplace, causing both of them to rapidly decay into blood and bones. Covered in blood, Ash stumbles outside as the sun begins to rise. Before he can get in his car to leave, the entity attacks him from behind as he lets out a final scream.