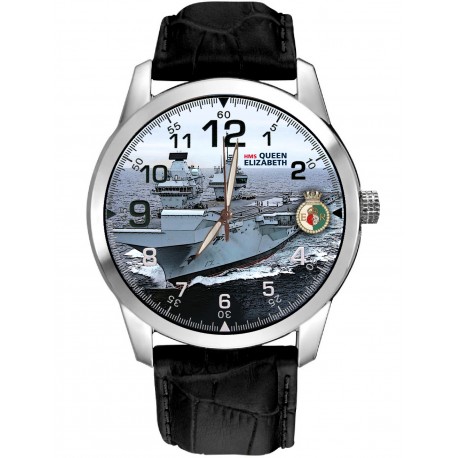 The Queen Elizabeth class is a class of two aircraft carriers of the United Kingdom's Royal Navy and the focal components of the UK Carrier Strike Group.[14][15] The lead ship, HMS Queen Elizabeth, was named on 4 July 2014,[16] in honour of Elizabeth I (not Elizabeth II).[17] She was commissioned on 7 December 2017,[2] with an initial operating capability expected in 2018.[18] The second, HMS Prince of Wales, was launched on 21 December 2017, and was commissioned on 10 December 2019.[19] At the NATO 2014 Wales summit, then Prime Minister David Cameron announced that the second carrier would be brought into service, ending years of uncertainty surrounding its future. This was confirmed by the November 2015 Government Strategic Defence Review, with both carriers entering service, one being available at any time.[20][21][22]

The contract for the vessels was announced on 25 July 2007, by the Secretary of State for Defence, Des Browne, ending several years of delay over cost issues and British naval shipbuilding restructuring. The contracts were signed one year later on 3 July 2008, with the Aircraft Carrier Alliance, a partnership formed with Babcock International, Thales Group, A&P Group, the UK Ministry of Defence and BAE Systems (after the creation of BVT Surface Fleet through the merger of BAE Systems Surface Fleet Solutions and VT Group's VT Shipbuilding, which was a requirement of the UK Government).

The vessels currently have a displacement of approximately 65,000 tonnes (64,000 long tons; 72,000 short tons),[3] but the design anticipates added weight over the lifetime of the ships.[23] The ships are 284 metres (932 ft) long and will have a Carrier Air Wing (CVW)[24] of up to forty aircraft (though they are capable of carrying up to fifty at full load).[12] They are the largest warships ever constructed for the Royal Navy. The projected cost of the programme is £6.2 billion.[25]

Both carriers were completed as originally planned, in a Short Take-Off and Vertical Landing (STOVL) configuration, deploying the Lockheed Martin F-35B. Following the 2010 Strategic Defence and Security Review, the British government had intended to purchase the F-35C carrier version of this aircraft, and adopted plans for Prince of Wales to be built to a Catapult Assisted Take Off Barrier Arrested Recovery (CATOBAR) configuration. After the projected costs of the CATOBAR system rose to around twice the original estimate, the government announced that it would revert to the original design on 10 May 2012.