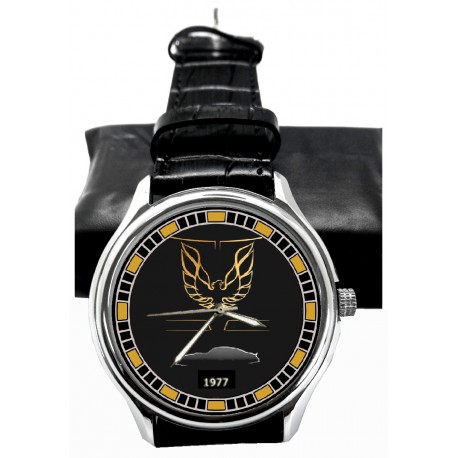 There was also a series of 1994 television films (Bandit Goes Country, Bandit Bandit, Beauty and the Bandit, and Bandit's Silver Angel) from original director/writer Hal Needham that were loosely based on the earlier version, with actor Brian Bloom playing Bandit. The three original films introduced two generations of the Pontiac Trans Am, and the Dodge Stealth in the television movie. Smokey and the Bandit was the second-highest-grossing film of 1977, second only to Star Wars.

Wealthy Texan Big Enos Burdette (Pat McCormick) and his son Little Enos (Paul Williams) seek a truck driver willing to bootleg Coors beer to Georgia for their refreshment. At the time, Coors was regarded as one of the finest beers in the United States,[3] but it could not be legally sold east of the Mississippi River. Truck drivers who had taken the bet previously had been caught and arrested by "Smokey" (CB slang for highway patrol officers, referring to the Smokey Bear–type hats worn in some states).

The Burdettes find legendary trucker Bo "Bandit" Darville (Burt Reynolds) competing in a truck rodeo at Lakewood Fairgrounds in Atlanta; they offer him $80,000 to haul 400 cases of Coors beer from Texarkana, Texas back to Atlanta in 28 hours; Big Enos has sponsored a driver running in the Southern Classic stockcar race and wants to "celebrate in style when he wins." Bandit accepts the bet and recruits his best friend and partner Cledus "Snowman" Snow (Jerry Reed) to drive the truck, while Bandit drives the "blocker", a black Trans Am bought on an advance from the Burdettes, to divert attention away from the truck and its illegal cargo.

The trip to Texas is mostly uneventful except for at least one pursuing Smokey whom Bandit evades with ease. They reach Texarkana an hour ahead of schedule, load their truck with the beer and head back toward Atlanta. Immediately upon starting the second leg of the run, Bandit picks up runaway bride Carrie (Sally Field), whom he eventually nicknames "Frog" because she is "kinda cute like a frog" and "always hoppin' around". But in so doing, Bandit makes himself a target of Texas Sheriff Buford T. Justice (Jackie Gleason), a career lawman whose handsome but slow-witted son Junior (Mike Henry) was to have been Carrie's bridegroom. Ignoring his own jurisdiction, Sheriff Justice, with Junior in tow, chases Bandit all the way to Georgia, even as various mishaps cause his cruiser to disintegrate around them.

The remainder of the film is one lengthy high-speed chase, as Bandit's antics attract more and more attention from local and state police across Dixie while Snowman barrels on toward Atlanta with the contraband beer. Bandit and Snowman are helped along the way (including via CB radio) by many colorful characters, including a hearse driver, an elderly lady, a drive-in waitress and all her customers, a convoy of trucks, and even a madam who runs a brothel out of her RV. Neither Sheriff Justice nor any other police officers have any knowledge of Snowman's illegal manifest.

The chase intensifies as Bandit and Snowman get closer to Atlanta; state and local police have stepped up their pursuit with more cruisers, larger roadblocks, and even a police helicopter to track Bandit's movements. With four miles still to go, and discouraged by the unexpected mounting attention, Bandit is ready to give up, but Snowman refuses to listen and takes the lead, smashing through the police roadblock at the entrance to the fairgrounds. They arrive back at Lakewood Speedway (while the Southern Classic race is being run) with only 10 minutes to spare, but instead of taking the payoff, Frog and Bandit accept a double-or-nothing offer from Little Enos: a challenge to run up to Boston and bring back clam chowder in 18 hours. They quickly leave in one of Big Enos' Cadillac convertibles, passing Sheriff Justice's badly damaged police car by the side of the road. Bandit first directs Sheriff Justice to Big and Little Enos, but then in a gesture of respect, reveals his true location and invites Justice to give chase, leaving Junior behind.

Director Hal Needham originally planned the film as a low-budget B movie with a production cost of $1 million,[2] with Jerry Reed as the Bandit. It was not until Needham's friend Burt Reynolds read the script, and said he would star, that the film was aimed at a more mainstream release; Reed would now portray Bandit's friend Snowman (Reed would eventually play the Bandit in Smokey and the Bandit Part III). At that time Reynolds was the top box office star in the world.

Universal Studios bankrolled Smokey and the Bandit for $5.3 million, figuring it was a good risk.[2] Just two days before production was to begin, Universal sent a "hatchet man" to Atlanta to inform Needham that the budget was being trimmed by $1 million. With Reynolds' salary at $1 million, Needham was left with only $3.3 million to make the film. Needham and assistant director David Hamburger spent 30 hours revising the shooting schedule.[2]

"Buford T. Justice" was the name of a real Florida Highway Patrolman known to Reynolds' father, who himself was once Police Chief of Riviera Beach, Florida. His father was also the inspiration for the word "sumbitch" used in the film, a variation of the phrase "son-of-a-bitch" that according to Reynolds he uttered quite often.

Jackie Gleason was given free rein to ad-lib dialogue and make suggestions. In particular the scene where Sheriff Justice unknowingly encounters the Bandit in the "choke and puke" (a roadside diner) wasn't in the original story, but rather was Gleason's idea.

Reportedly, Needham had great difficulty getting any studios or producers to take his project seriously (in the film industry, he was better known as a stuntman). He managed to obtain studio attention after his friend Reynolds agreed to portray the Bandit in the film.

The movie was primarily filmed in Georgia in the cities of McDonough, Jonesboro and Lithonia. The scenes set in Texarkana were filmed in Jonesboro and the surrounding area, and many of the chase scenes were filmed in the surrounding areas on Highway 54 between Fayetteville and Jonesboro for a majority of the driving scenes, Mundy's Mill Road, Main Street in Jonesboro, Georgia State Route 400, I-85 (Pleasant Hill exit), and in McDonough. However, the scene where they drive through the Shell gas station was filmed in Ojai, California on the corner of Ojai and El Paseo. Much of the surrounding scene comes from that immediate vicinity. The scene featuring the racetrack was filmed at Lakewood Speedway at the old Lakewood Fairgrounds on the south side of Atlanta. Therollercoaster seen in the movie was the Greyhound. It had not been used for some time and was repainted for the film. It was destroyed in Smokey and the Bandit II and a flashback scene in Part 3.[4]

The film's theme song, "East Bound and Down," was written virtually overnight by Jerry Reed. He gave Needham a preview of the song, and when initially he got no reaction from the director, offered to rewrite the song. Needham however liked the song so much he assured Jerry not to change a word. It became one of Reed's biggest hits and his signature number.[5]

The area around Helen, Georgia was also used for some locations. The scene where Buford T. Justice's car has the door knocked off by a passing semi was shot on GA 75, 3 miles (4.8 km) north of Helen. The tow truck driver was an actual local garage owner, Berlin Wike.

The film features the custom clothing and costuming of Niver Western Wear of Fort Worth, Texas.[6] NWW provided much of the western attire worn in the film, as well as the custom-made (size 64) sheriff's uniforms that Jackie Gleason wore throughout the film.

Reynolds and Sally Field began dating during the filming of Smokey and the Bandit.

While made to take advantage of the ongoing 1970s CB radio fad, the film itself added to the craze.[7]

Though the film Moonrunners (1975) is the precursor to the television series The Dukes of Hazzard (1979-1985), from the same creator and with many identical settings and concepts, the popularity ofSmokey and the Bandit and similar films helped get the Dukes series on air. Three actors from the main cast of The Dukes of Hazzard appear in small uncredited roles in Smokey and the Bandit: Ben Jones, John Schneider and Sonny Shroyer (who played a police officer in both). In return, Reynolds portrayed the Dukes character Boss Hogg (originally portrayed by Sorrell Booke) in the film adaptationThe Dukes of Hazzard (2005). Reynolds is also referenced by name in several early episodes of the series.

Needham saw an advertisement for the soon-to-be-released 1977 Pontiac Trans Am and knew right away that would be the Bandit's car, or–as Needham referred to it–a character in the movie. He contacted Pontiac and an agreement was made that four 1977 Trans Ams and two Pontiac LeMans 4-door sedans would be provided for the movie. The Trans Ams were actually 1976 model cars with '77 front ends. (In 1976, both the Firebird/Trans Am and Chevrolet Camaro had two round headlights, and the '77 Firebird/Trans Am was changed to four square headlights, while the Camaro remained unchanged.) The decals were also changed to 1977-style units, as evidenced by the engine size callouts on the hood scoop being in liters rather than cubic inches as had been the case in 1976. The hood scoop on these cars says "6.6 LITRE", which in 1977 would have denoted an Oldsmobile 403-equipped car or a non W-72, 180 hp version of the 400 Pontiac engine. All four of the cars were badly damaged during production,[8] one of which was all but destroyed during the jump over the dismantled bridge. The Trans Am used for the dismantled bridge jump was equipped with a booster rocket, the same type that was used by Evel Knievel during his failed Snake River Canyon jump. Needham served as the driver for the stunt (standing in for Reynolds) while Lada St. Edmund was in the same car (standing in for Sally Field during the jump). By the movie's ending, the final surviving Trans Am and LeMans were both barely running and the other cars had become parts donors to keep them running. The Burdettes' car is a 1974 Cadillac Eldorado convertible painted in a "Candy Red" color scheme, and is seen briefly at the beginning of the movie and as Bandit, Snowman, Fred, and Frog make their escape in the final scene.

The film also made use of three Kenworth W900A short-frame semi trucks which Jerry Reed can be seen driving, each equipped with 38" sleepers. Two units were 1974 models as evidenced by standard silver Kenworth emblems on the truck grille, and one unit was a 1973 model as evidenced by the gold-painted Kenworth emblem on the truck's grille signifying Kenworth's 50 years in business. The paint code for each truck was coffee brown with gold trims, and the 48-foot (15 m) mural trailer used was manufactured by Hobbs Trailers in Texas with a Thermo King Refrigeration unit which was non-operational. This is obvious because there is no fuel tank on the underside of the trailer to power the refrigeration unit, and the unit is never heard running