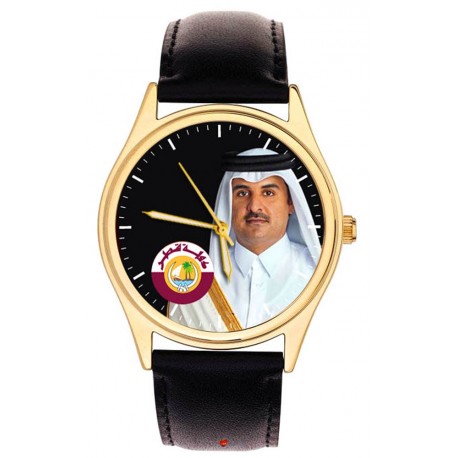 Sheikh Tamim bin Hamad Al Thani (Arabic: تميم بن حمد ال ثاني ‎‎; born 3 June 1980) is the eighth and current Emir of Qatar. He is the fourth son of the previous Emir, Hamad bin Khalifa Al Thani. He became Emir of Qatar on 25 June 2013 after his father's abdication. Tamim has held a variety of government posts within Qatar and also worked to promote numerous sporting events within the country. As of 2013, Tamim is the youngest reigning monarch among the GCC countries[1] and the youngest current sovereign worldwide.

Tamim bin Hamad was born on 3 June 1980 in Doha, Qatar.[2] He is the fourth son of Sheikh Hamad bin Khalifa Al Thani, and second son of Sheikha Moza bint Nasser Al Missned, Hamad's second wife.[3][4] Tamim was educated at Great Britain's Sherborne School (International College) in Dorset,[2] and at Harrow School, where he sat his A-Levels in 1997.[2][3] He then attended the Royal Military Academy Sandhurst, graduating in 1998.[3]

Sheikh Tamim was commissioned as a Second Lieutenant in the Qatar Armed Forces upon graduation from Sandhurst.[3] He became the heir apparent to the Qatar throne on 5 August 2003, when his elder brother Sheikh Jassim renounced his claim to the title.[2][3] Since then he was groomed to take over rule, working in top security and economics posts.[4] In 2009, he was appointed deputy commander-in-chief of Qatar's armed forces.[3]

Sheikh Tamim promoted sport as part of Qatar's bid to raise its international profile.[4] In 2005 he founded Qatar Sport Investments, which owns Paris Saint-Germain F.C. among other investments. In 2006, he chaired the organizing committee of the 15th Asian Games in Doha. Under his leadership, all member countries attended the event for the first time in its history. That year Egypt's Al Ahram voted Tamim "the best sport personality in the Arab world".[3] Under his guidance, Qatar won the rights to host the 2014 FINA Swimming World Championships and the 2022 FIFA World Cup. Tamim is a member of theInternational Olympic Committee and the National Olympic Committee chairman.[3][4] He headed Doha's bid for the 2020 Olympics.[3] The country will host the football World Cup in 2022. Qatar is expected to spend about $100 billion on infrastructure to prepare for the event.[5]

Sheikh Tamim heads the Qatar Investment Authority board of directors. Under his leadership, the fund has invested billions in British businesses. It owns large stakes in Barclays Bank, Sainsbury's, andHarrods.[6] The fund also owns a share of Europe's fourth tallest building, the Shard.[4]

Tamim has also held a number of other posts including:

On 25 June 2013, the Emir of Qatar and Tamim's father, Sheikh Hamad bin Khalifa Al Thani, revealed his plans to step down as Emir in a meeting with his close relatives and aides.[1][9] Tamim then became the Emir of Qatar after his father handed over power in a televised speech.[10] He was the first ruler, in a succession of three Qatari rulers from the Al Thani family, to ascend to power without resorting to a coup.[11] According to The Economist, of his previous sibling rivals to the throne, "One played too much, the other prayed too much."[12]

The transition of power was expected to be smooth, as family members hold many of the nation's top posts.[3]

Moreover, according to a diplomatic source close to the Al Thani family, Sheikh Tamim has "a strong personality" that allowed him to "establish himself within the ruling family" despite not being the family's first choice for Emir.[6] Diplomats quoted by the BBC argued that Jassim, who served as crown prince for eight years, had hoped to expand his political powers. According to a report by Stratfor, Jassim had no allies among the military forces or secret police at the time of the 2013 political transition, and thereby few chances to overturn Hamad’s decree.[13]

Tamim is described as friendly, confident, and open by those who know him. He is also described as savvy, careful, and calculating.[3] In addition, he is considered to be a pragmatist, and to have "excellent relations" with the West including the United States and France.[3]