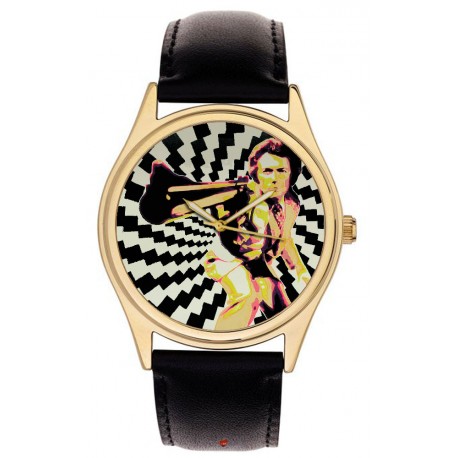 Dirty Harry is a 1971 Americanaction thriller filmproduced and directed by Don Siegel, the first in the Dirty Harryseries. Clint Eastwood plays the title role, in his first outing as San Francisco Police Department (SFPD)Inspector "Dirty" Harry Callahan. The film drew upon the actual case of the Zodiac Killer as the Callahan character seeks out a similar vicious psychopath.

Dirty Harry was a critical and commercial success and set the style for a whole genre of police films. It was followed by four sequels: Magnum Force in 1973, The Enforcer in 1976,Sudden Impact in 1983 (directed by Eastwood himself) and The Dead Poolin 1988.

In 2012, the film was selected for preservation in the National Film Registry by the Library of Congress for being "culturally, historically, and aesthetically significant."

A psychopathic serial killer calling himself "Scorpio" (Andy Robinson) shoots a young woman in a San Francisco swimming pool from a nearby rooftop. SFPD Inspector Harry Callahan (Clint Eastwood) finds a blackmail message demanding the city pay him $100,000 whilst also promising that for each day his demand is refused he will commit a murder; his next victim will be "a Catholic priest or a nigger." The chief of police and the mayor (John Vernon) assign the inspector to the case, despite his reputation for violent solutions.

While in a local diner, Callahan observes a bank robbery in progress. He goes outside, wielding his Smith & Wesson Model 29revolver, kills two of the robbers, and wounds a third. Callahan then challenges him:

I know what you’re thinking: 'Did he fire six shots or only five?' Well, to tell you the truth, in all this excitement, I’ve kind of lost track myself. But being this is a .44 Magnum, the most powerful handgun in the world, and would blow your head clean off, you’ve got to ask yourself one question: 'Do I feel lucky?' Well, do you, punk?

After the robber surrenders, he tells Callahan that he must know if the gun was still loaded ("I gots to know...") . Callahan pulls the trigger, with the weapon pointed directly at the robber, and laughs,as it is revealed to be empty.

Scorpio targets a gay black male, but is interrupted by a police helicopter and escapes. Later that night, Callahan and his rookie partner, Chico Gonzalez (Reni Santoni) pursue a likely suspect, but it turns out to be a false alarm. Following that, Callahan successfully halts a suicide attempt, after which he reveals that the origin of his nickname comes from the fact that he is given every dirty job to do.

When Scorpio kills a young black boy from another rooftop, the police believe the killer will next pursue a Catholic priest. Callahan and Gonzalez, wait for Scorpio near a Catholic church, where a rooftop-to-rooftop shootout ensues, with Callahan attempting to snipe Scorpio with a rifle while Scorpio returns fire with a submachine gun. Scorpio escapes, killing a police officer disguised as a priest.

Scorpio then demands $200,000 ($1.2 million today) for a teenage girl he has kidnapped, threatening to let her suffocate otherwise. The mayor decides to pay and tells Callahan to deliver the money with no tricks, but the inspector wears a covert listening device, brings a switchblade, and has his partner follow him. As Scorpio sends Callahan to various payphones throughout the city to make sure he is alone, the chase ends at Mount Davidson. Scorpio brutally beats Callahan and tells him he's going to kill him and let the girl die anyway; Gonzalez comes to his partner's rescue but is wounded. Callahan stabs Scorpio in the leg, but the killer escapes without the money.

The doctor who has treated Scorpio's wound phones the police and tells Callahan and his new partner that he has seen Scorpio inKezar Stadium. The officers break in and Callahan shoots Scorpio in his wounded leg. When Scorpio refuses to reveal the location of the girl and demands his rights, Callahan makes him confess by standing on the wounded leg, but the police are too late to save her.

Because Callahan searched Scorpio's home without a warrant and improperly seized his rifle for evidence, the District Attorney (Josef Sommer) has no choice but to let Scorpio go. Outraged, Callahan warns that Scorpio will kill again and follows him on his own time. To thwart Callahan, Scorpio pays to have himself beaten by a thug, then claims the inspector is responsible. Despite Callahan's protests, he is ordered to stop following Scorpio.

After stealing a Walther P38 pistol from a liquor store owner, Scorpio kidnaps a school busload of children and demands a $200,000 ransom and a plane to leave the country. The mayor again insists on paying but Callahan angrily refuses when asked to deliver the ransom. Instead he locates the bus and jumps onto the top from a bridge. The bus crashes into a dirt embankment and Scorpio flees into a nearby quarry, where he has a running gun battle with Callahan. Finally Scorpio spots a young boy sitting near a pond and grabs him as a hostage.

The inspector feigns surrender, but fires, wounding Scorpio in his left shoulder. The boy runs away and Callahan stands over Scorpio, gun drawn, reprising his "Do you feel lucky, punk?" speech. Scorpio feels intimidated for a moment, but then foolishly lunges for his pistol. Callahan shoots him instantly, causing him to fall into the water. As Callahan watches the dead body floating, he takes out his inspector's badge and hurls it into the water before walking away.