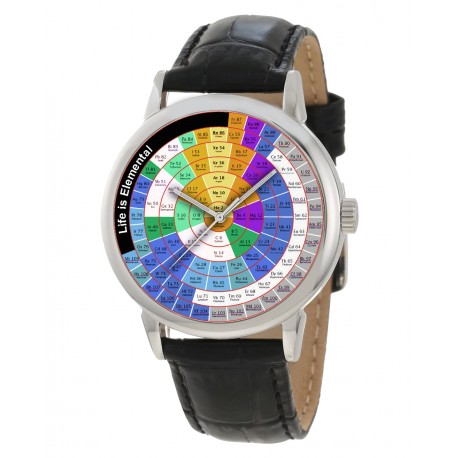 The periodic table is a tabular arrangement of the chemical elements, ordered by their atomic number (number of protons), electron configurations, and recurring chemical properties. This ordering shows periodic trends, such as elements with similar behaviour in the same column. It also shows four rectangular blocks with some approximately similar chemical properties. In general, within one row (period) the elements are metals on the left, and non-metals on the right.

The rows of the table are called periods; the columns are called groups. Six groups have names as well as numbers: for example, group 17 elements are the halogens; and group 18, the noble gases. The periodic table can be used to derive relationships between the properties of the elements, and predict the properties of new elements yet to be discovered or synthesized. The periodic table provides a useful framework for analyzing chemical behaviour, and is widely used in chemistry and other sciences.

The Russian chemist Dmitri Mendeleev published the first widely recognized periodic table in 1869. He developed his table to illustrate periodic trends in the properties of the then-known elements. Mendeleev also predicted some properties of then-unknown elements that would be expected to fill gaps in this table. Most of his predictions were proved correct when the elements in question were subsequently discovered. Mendeleev's periodic table has since been expanded and refined with the discovery or synthesis of further new elements and the development of new theoretical models to explain chemical behaviour.

All elements from atomic numbers 1 (hydrogen) to 118 (oganesson) have been discovered or synthesized, with the most recent additions (nihonium, moscovium,tennessine, and oganesson) being confirmed by the IUPAC on December 30, 2015 and officially named on November 28, 2016: they complete the first seven rows of the periodic table.[1][2] The first 94 elements exist naturally, although some are found only in trace amounts and were synthesized in laboratories before being found in nature.[n 1] Elements with atomic numbers from 95 to 118 have only been synthesized in laboratories or nuclear reactors.[3] Synthesis of elements having higher atomic numbers is being pursued. Numerous synthetic radionuclides of naturally occurring elements have also been produced in laboratories.