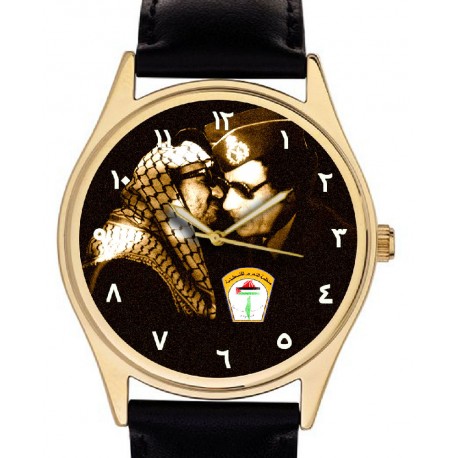 Mohammed Yasser Abdel Rahman Abdel Raouf Arafat al-Qudwa (/ˈærəˌfæt, ˈɑːrəˌfɑːt/;[2] Arabic: محمد ياسر عبد الرحمن عبد الرؤوف عرفات‎‎‎; 24 August 1929 – 11 November 2004), popularly known as Yasser Arafat (Arabic: ياسر عرفات‎‎ , Yāsir `Arafāt) or by his kunya Abu Ammar (Arabic:أبو عمار‎‎ , 'Abū `Ammār), was a Palestinian political leader. He was Chairman of the Palestine Liberation Organization(PLO) from 1969 to 2004 and President of the Palestinian National Authority (PNA) from 1994 to 2004.[3]Ideologically an Arab nationalist, he was a founding member of the Fatah political party, which he led from 1959 until 2004.

Arafat was born to Palestinian parents in Cairo, Egypt, where he spent most of his youth and studied at theUniversity of King Fuad I. While a student, he embraced Arab nationalist and anti-Zionist ideas. Opposed to the 1948 creation of the State of Israel, he fought alongside the Muslim Brotherhood during the 1948 Arab–Israeli War. Returning to Cairo, he served as president of the General Union of Palestinian Students from 1952 to 1956. In the latter part of the 1950s he co-founded Fatah, a paramilitary organisation seeking the disestablishment of Israel and its replacement with a Palestinian state. Fatah operated within several Arab countries, from where it launched attacks on Israeli targets. In the latter part of the 1960s Arafat's profile grew; in 1967 he joined the PLO and in 1969 was elected chair of the Palestinian National Council(PNC). Fatah's growing presence in Jordan resulted in military clashes with King Hussein's Jordanian government and in the early 1970s it relocated to Lebanon. There, Fatah assisted the Lebanese National Movementduring the Lebanese Civil War and continued its attacks on Israel, resulting in it becoming a major target of Israel's 1978 and 1982 invasions.

From 1983 to 1993, Arafat based himself in Tunisia, and began to shift his approach from open conflict with the Israelis to negotiation. In 1988, he acknowledged Israel's right to exist and sought a two-state solution to the Israeli–Palestinian conflict. In 1994 he returned to Palestine, settling in Gaza City and promoting self-governance for thePalestinian territories. He engaged in a series of negotiations with the Israeli government to end the conflict between it and the PLO. These included the Madrid Conference of 1991, the 1993 Oslo Accords and the 2000 Camp David Summit. In 1994 Arafat received the Nobel Peace Prize, together with Yitzhak Rabin andShimon Peres, for the negotiations at Oslo. At the time, Fatah's support among the Palestinians declined with the growth of Hamas and other militant rivals. In late 2004, after effectively being confined within his Ramallah compound for over two years by the Israeli army, Arafat fell into a coma and died. While thecause of Arafat's death has remained the subject of speculation, investigations by Russian and French teams determined no foul play was involved.[4][5][6]

Arafat remains a controversial figure. The majority of the Palestinian people view him as a heroic freedom fighter and martyr who symbolized the national aspirations of his people. Conversely, most Israelis[7][8] came to regard him as an unrepentant terrorist,[9][10] while Palestinian rivals, includingIslamists and several PLO leftists, often denounced him for being corrupt or too submissive in his concessions to the Israeli government.