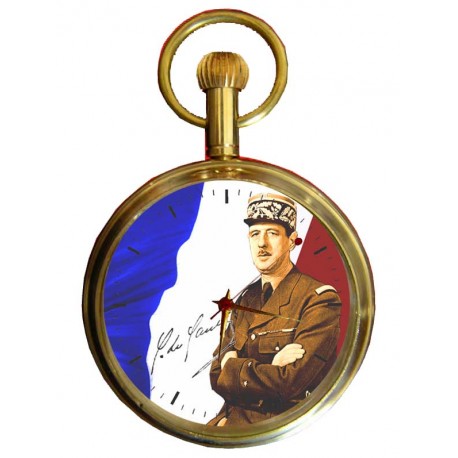 A veteran of World War I, de Gaulle came to the fore in the 1920s and '30s as a proponent of mobile armoured divisions, which he believed would become central to warfare. During World War II, he earned the rank of brigadier general (retained throughout his life),leading one of the few successful armoured counter-attacks during the 1940 Battle of France in May in Montcornet, and then briefly served in the French government as France was falling. De Gaulle was the most senior French military officer to reject the June 1940 armistice to Nazi Germanyright from the outset.[3] When his superior, Marshal Philippe Pétain, gave a radio address to convince the French people to give in to a German takeover, de Gaulle happened to be in Britain for military reasons. He responded to Pétain the next day by giving a famous radio address, broadcast by the BBC on 18 June 1940, exhorting the French people to resist Nazi Germany and organized the Free French Forces with exiled French officers in Britain. As the war progressed, de Gaulle gradually gained control of all French colonies except Indochina. By the time of the Allied invasion of France in 1944 he was heading what amounted to a French government in exile. From the very beginning, de Gaulle insisted that France be treated as a great power by the other Allies, despite her initial defeat. De Gaulle became prime minister in the French Provisional Government, resigning in 1946 because of political conflicts.

After the war ended he founded his own political party, the Rally of the French People- Rassemblement du Peuple Francais, (RPF) on 14 April 1947. Although he retired from politics in the early 1950s after the RPF's failure to win power, and had limited access to government-controlled TV and radio, he was voted back to power as President of the Council of Ministers by the French Assembly during the May 1958 crisis. De Gaulle led the writing of a new constitution founding the Fifth Republic,[6] and was elected President of France.

As President, Charles de Gaulle was able to end the political chaos that preceded his return to power. A new French currency was issued in January 1960 to control inflation and industrial growth was promoted. Although he initially supported French rule overAlgeria, he controversially decided to grant independence to that country, ending an expensive and unpopular war but leaving France divided and having to face down opposition from the European settlers and French military who had originally supported his return to power.

Immensely patriotic, de Gaulle and his supporters held the view, known as Gaullism, that France should continue to see itself as a major power and should not rely on other countries, such as the United States, for its national security and prosperity. Often criticized for his Politics of Grandeur, de Gaulle oversaw the development of French atomic weapons and promoted a foreign policy independent of American and British influences. He withdrew France from NATO military command—although remaining a member of the western alliance—and twice vetoed Britain's entry into the European Community. He travelled widely in Eastern Europe and other parts of the world and recognised Communist China. On a visit to Canada in 1967, he gave encouragement toQuébécois separatism with his historical "Vive le Québec Libre" speech.

During his term, de Gaulle also faced controversy and political opposition from Communists and Socialists, as well as from the far right. Despite having been re-elected as President, this time by direct popular ballot, in 1965, in May 1968 he appeared likely to lose power amidst widespread protests by students and workers, but survived the crisis with an increased majority in the Assembly. However, de Gaulle resigned in 1969 after losing a referendum in which he proposed more decentralization. He is considered by many to be the most influential leader in modern French history.