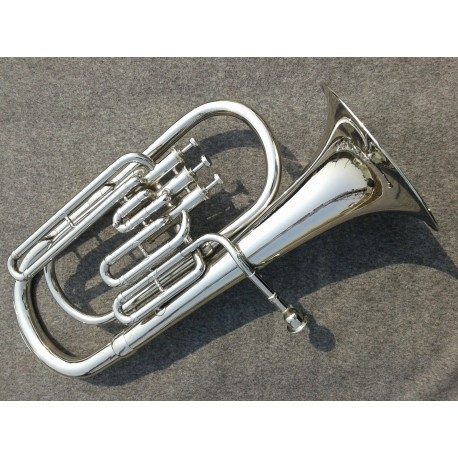 Intermediate Brass Bb Baritone Horn (Chrome-Plated). Latest Design. Do not confuse it with a euphonium that is the more common and larger instrument. this is a very low cost basic student instrument not to be confused in build and play quality with a professional $4000 Yamaha.

THIS IS NOT A EUPHONIUM OR A TUBA, THIS IS A RARE BARITONE HORN THAT HAS A LIGHTER AND PLEASANT SOUND AND IS EASIER TO PLAY.

About the Baritone Horn

The baritone horn is a member of the brass instrument family. It has a predominantly cylindrical bore as do the trumpet and trombone[3] and uses a large mouthpiece much like those of a trombone or euphonium, although it is a bit smaller. Some baritone mouthpieces will sink into a euphonium's mouthpiece tube. It is pitched in B♭, one octave below the B♭ trumpet. It is a type of low brass instrument. In the UK the baritone is frequently found in brass bands. The baritone horn is also a common instrument in high school and college bands, as older baritones are often found in schools' inventories, however, these are gradually being replaced by intermediate-level euphoniums.

The baritone is pitched in concert B♭[4] meaning that when no valves are in use the instrument will produce partials of the B♭ harmonic series. Music for the baritone horn can be written in either the bass clef or the treble clef. When reading from the bass clef, the baritone horn is a non-transposing instrument. However, when written in the treble clef it is often used as transposing instrument, transposing downwards a major ninth, so that written middle C for the baritone is concert B♭ below low C, with the fingerings thus matching those of the trumpet but sounding an octave lower

The baritone sounds with a timbre somewhere between the brightness of the trombone and the more mellow tone of the euphonium.

Distinguishing the baritone from the euphonium

There is some confusion of nomenclature in the United States between true baritones and euphoniums, in part due to the old practice of American euphonium manufacturers calling their professional models by their proper names, and branding entry-level student models as baritones. This practice has nearly stopped. True baritone horns are sometimes called "British-bore Baritones" in the US to avoid this confusion.

An "American baritone", featuring three valves on the front of the instrument and a curved forward-pointing bell, was common in American school bands throughout most of the twentieth century. While this instrument is in reality a conical-cylindrical bore hybrid, neither truly euphonium nor baritone, it was almost universally labeled a "baritone" by both band directors and composers.

Specially wrapped versions of the baritone horn have been created for use in marching bands and Drum and Bugle Corps. They have 3 valves and a front-facing bell and are the tenor voice of a drum and bugle corps, below the soprano voice of the trumpet, the alto voice of alto horn or mellophone, and above the low contrabass bugles or tubas.

Over the past several decades, the baritone advanced in the drum and bugle corps due to certain rule changes. Up until 1977, baritone bugles, as with all bugles at the time, were restricted to one horizontal piston valve and one rotary valve. That year, the Drum Corps International rules congress passed a rule allowing 2 vertical piston valves. The rules were amended once more in 1989 permitting the addition of a third valve. From the 1950s until 2000, all drum and bugle corps were required to use instruments pitched in the key of G. That year, Drum Corps International changed its rules again, allowing instruments in any key, with most other major organizations (e.g. Drum Corps Associates) following suit soon after. Since this change, the standard baritone has been the instrument pitched in B♭.

Some high school and college bands do not use marching baritones and continue to use upright-bell front baritone horns on the field.

Some marching bands substitute a section of baritones for the trombone section[citation needed].

The baritone horn has largely receded into the background in the concert band world of today. Notable artists who are today referenced as great euphonium players who played baritone were Simone Mantia and Leonard Falcone. The Leonard Falcone International Tuba and Euphonium Festival is a notable venue for aspiring artists on euphonium, but its namesake played baritone horn on his many recordings.[5] Legendary trumpeter Maynard Ferguson used a baritone horn in the song "Gospel John" and in one of his three solos (the other two involving a valved trombone and a trumpet) in a live performance of one of his songs "Great Guns"