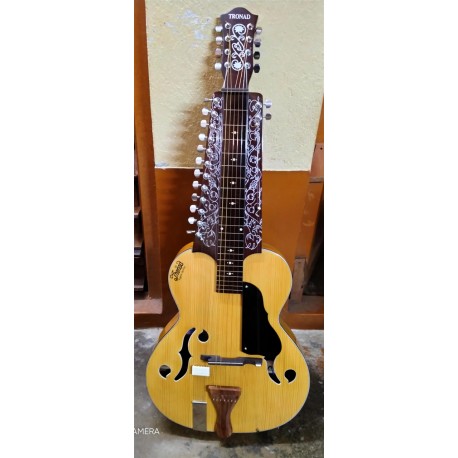 A Mohan Veena is either of two distinct plucked string instruments used in Indian classical music, especially Hindustani classical music which is associated with the northern parts of the Indian subcontinent. A modified sarod, created by sarod player Radhika Mohan Maitra in the 1940s, was called the mohan veena.[1] The instrument was so named by musicologist Thakur Jaidev Singh, then the chief producer at All India Radio.[2][3] Later Vishwa Mohan Bhatt modified a Hawaiian guitar to create an instrument also called the mohan veena, with Bhatt naming the instrument after himself. The latter instrument has become more closely associated with the name, especially following Bhatt winning the Grammy Award in 1994.

Bhatt's instrument is a modified archtop Hawaiian guitar with 20 strings - three to four melody and four to five drone strings strung from the peghead, and twelve sympathetic strings strung to the tuners mounted on the side of the neck. A gourd (or the tumba) is screwed into the back of the neck for improved sound sustain and resonance. It is held in the lap like a slide guitar and also played with a bar like a slide guitar. It is under tremendous tension; the total strings pull to be in excess of 500 pounds.[4] Performers include Vishwa Mohan Bhatt, Salil Bhatt (who went on to invent the Satvik Veena, a derivative of his father's Mohan Veena), Manish Pingle (toured UK in 2015 with Michael Messer), and Canadian blues singer Harry Manx, and soumalya Mukhopadhyay, who has been called true representative of mohanbeena by pandit vishwa mohan bhatt himself for his melody and taans. There are variants of Slide Guitars in India, such as the Chaturangui (created by Pandit Debashish Bhattacharya, 1978 known as the earliest innovation of Slide guitar in India), Hansa Veena (created by Pandit Barun Kumar Pal), and Shankar Veena (created by Kamala Shankar).

The Mohan Veena is an Indian Acoustic Lap Slide Guitar with Resonating "Taraf" Strings Unfretted Harp (Swarmandal) Strings. A lovely fusion of the sound of the sitar and the guitar. Absolutely fabulous instrument for playing the blues, for classical & fusion music, & just getting a great new sound to your work.

Indian stringed instruments have undergone many changes throughout history . Many western musical instruments like violin, harmonium, mandolin, archtop guitar and electric guitar have come to be accepted in Indian classical music. Multiple Grammy-winning guitarist Vishwa Mohan Bhatt developed and named this hybrid slide guitar and has been added to the list of Indian classical instruments.
The Mohan Veena is a highly modified archtop that is played lap-style. It has 19 strings: three melody strings and four drone strings coming out of the peg heads, and 12 sympathetic strong to tuners mounted to a piece of wood added to the side of the neck. The melody strings are on what we would consider the treble side of the neck, and the drone strings are on the bass side. The drone strings are lower in height than the melody strings to allow for unrestricted playing of the melody strings. The sympathetic strings run underneath the melody and drone strings to yet another level in the bridge. The instrument has a carved spruced top, mahogany back and sides, a mahogany neck, and a flat, fretless, rosewood fingerboard.

The Mohan Veena is under tremendous tension; the total strings pull to be in excess of 500 pounds. It is due to this high tension the tone tuns incredible with the sympathetic ringing out and strengthening each note played. This is a loud instrument made to cut through with low amplification.

Ships in a rugged hardcase especially designed for international transport...the veena comes with its own custom-made steel slide.

"He (Manx) plays slide guitar with the weight of world in every note -- sorrow and seriousness penetrate every note."