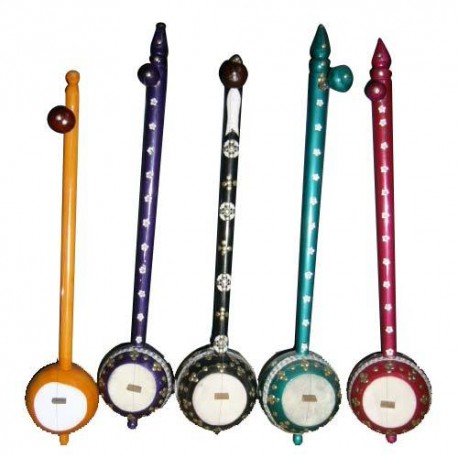 The tumbi, sometimes known as an Ektara (“one stringed”), is a folk instrument whose use has spread throughout North India from Punjab to Bengal. Often used in accompaniment to Bhangra music, it can be also be used as a drone, or as a simple melodic complement to percussion. Made of a wooden stick attached to a wooden head or gourd, and with a single metallic string running its length, the tumbi is played with two hands. With a continuous flick with the forefinger of one hand, while the other hand’s fingers press the down the string at various points along the neck, various notes can be played in rapid succession. The power of the tumbi lies in its ability to produce quick volleys of notes within high and low points on the scale.

Producing deep, rich notes, the deluxe tumbi is decorated making it perfect for stage and show performances. Reverberating with tingling notes, the base of this tumbi is made with high quality wood, resulting in hypnotic mid level pitch. Playing this tumbi will not only enliven your spirit, but will also bring shivers to the crowd, causing their hair to stand on end with the surfacing of that inner joy which yearns to be expressed.