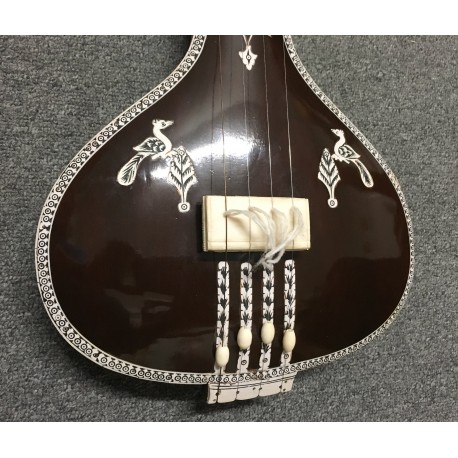 Pro-grade Tanpura with all accessories, spare string set, great build quality. Dark or natural wood color. Inbuilt piezo pickup. Can be played both as acoustic and semi-acoustic, uses standard guitar jack to connect to your amp.

The Tanpura is called as the Tambura (Devanagari: तम्पूरा) is along necked plucked lute, tumba made with a dried Gourd. This is a stringedinstrument found in different versions in different places. This is alsocalled Tambora  in Marathi, Tambura  in South India, Tamburo in Gujarati, or Tanpura in North India in its bodily shape somewhat resembles the sitar,but it has no frets, as only the open strings are played as a harmonicaccompaniment to the other musicians. It has four or five (rarely, six) wirestrings, which are plucked one after another in a regular pattern to create aharmonic resonance on the basic noter.

This 39" long female tanpura is made in Miraj India. The city of Maraj is known to produce the finest tanpura in the world. The typical north Indian tanpura, favored by Hindustani musicians, is known as the Miraj style.  They skillfully cut the pumpkin gourd to create the correct shape, and join the gourd and body pieces with precision. They understand how the thickness of the wood body and neck will affect the tone of the instrument and take great care to craft the structures of even thickness. Miraj tanpuras are crafted from seasoned toon wood. They are characterized by accurate woodwork, precise joining, artful decorations, and attention to the finishing and Jawari (tuning) work. The result is a light weight instrument of high sound quality that will last for years to come. The tanpura is an Indian drone instrument known for its rich sound. It resembles the sitar in size and shape, but has no frets and no sympathetic strings. Most Tanpura have four strings tuned to the tonic, a few have 5 or 6 strings. The name of the instrument has a number of variations, including: tanpura, tanpoora, tambura, thamboora, thambura, and tamboora. Female tanpuras are smaller than the male. The decorative inlays may vary, but all are artfully carved.