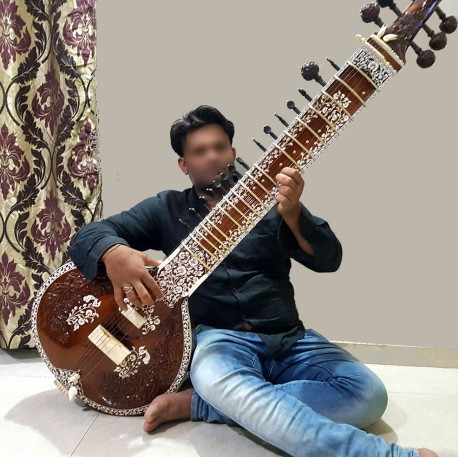 The surbahar is over 130 cm (51 inches). It uses a dried gourd as a resonator, and has a neck with very wide frets, which allow a glissando of six notes on the same fret through the method of pulling. The neck is made out of tun (Cedrela tuna), or teak wood.

The main bridge has a slightly bent upper surface which results in a droning sound, because the vibrating span of the strings quivers ever so slightly. The instrumentalist plays the strings using a metallic plectrum, the mizrab, which is fixed on the index finger of the player's right hand.

Three plectrums are used to play the dhrupad style of alap, jor, and jhala on surbahar. In the dhrupad style, instead of performing the sitarkhani and masitkhani gats, the instrumentalist plays the slow dhrupadcomposition in accompaniment with pakhawaj. Some researchers believe that surbahar was invented around 1825.