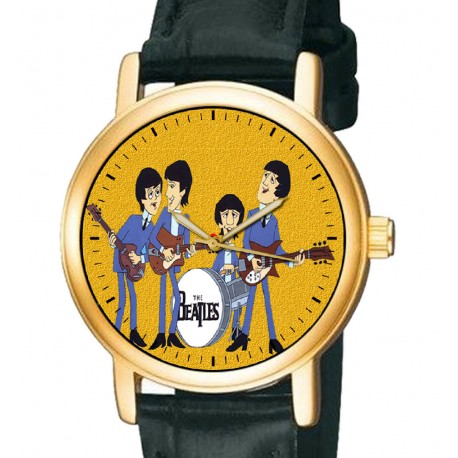 The Beatles influence on rock music and popular culture was, and remains, immense. Their commercial success commenced an immediate wave of changes—including a shift from US global dominance of rock and roll to UK acts, from soloists to groups, from professional songwritersto self-penned songs, and to changes in fashion and lifestyle.

Prior to The Beatles' influence, record albums were of secondary consideration to singles ("45s") in mass marketing, generally devised to contain "filler" material along with one or two hits. As their career proceeded, however, The Beatles began to increasingly focus on the album as an artistic medium in its own right. In general the Beatles did not include their singles on their albums. Several Beatles album covers have been copied or parodied, for example:

Richard Lester received a formal letter from MTV declaring him the father of the modern pop video, for the work he did directing both of the early Beatles films, A Hard Day's Night (1964) and Help! (1965). His revolutionary camera techniques together with short lines of dialogue and rapid editing cuts to the beat were all seen as the precursor to the modern rock video.

In the mid-1960s, The Beatles began filming promotional music videos for their songs, which they sent to television networks in lieu of appearing in person. Starting with the promotional clip for "Rain" in 1966, these films began using many techniques previously only seen in experimental film, such as intensive use of slow-motion and reversed film. This approach was further taken to new heights with the groundbreaking promo clip for "Strawberry Fields Forever", directed by Swedish television director Peter Goldman in January 1967 which, besides the techniques already seen in "Rain", also used intricate jump-cuts that rapidly alternated between night and day, switching colour temperature filters during the song's outro extensive post-production colour filtering and other avant-garde devices. These techniques were later copied and the use of such film and videos started the now common practice of releasing a video clip to accompany singles.

In May 1966, John Lennon said of people covering their songs, "Lack of feeling in an emotional sense is responsible for the way some singers do our songs. They don't understand and are too old to grasp the feeling. Beatles are really the only people who can play Beatle music."

Although many artists have performed covers of songs by The Beatles, the following are among the most notable:

Hendrix opened the show with his own rendition of "Sgt. Pepper's Lonely Hearts Club Band", which he had learned in the few days leading up to the show. Harrison and McCartney were extremely impressed by this, especially because it was played on the Sunday after the release of Sgt. Pepper the previous Friday. McCartney had publicly endorsed Hendrix for months, before Hendrix broke into the UK music scene.[4] Hendrix also played "Day Tripper," which can be found on the live albums Radio One and BBC Sessions.

Joe Cocker's first album was called With a Little Help from My Friends and contained a song with the same name. He had completely revamped the Lennon/McCartney song by changing it to a 12/8 blues/rock song. The Beatles heard it before its release, as the producer was uncertain as to how they would react to such a radical overhaul of one of their tracks. The Beatles agreed that it was a great version.

Cocker's version was later used as the theme song for the TV show The Wonder Years.

In the album "Joe Cocker!" he also sang: "She came in through the bathroom window" and "Something".

Cocker later sang and acted the song "Come Together" in the feature film Across the Universe.

David Bowie covered "Across the Universe" on his 1975 album Young Americans. John Lennon was partly involved in the making of the album. Bowie revamped the song into a soul version, eliminating the monotone vocals used in the Beatles version (and other covers of the song), as well as eliminating the "jai guru deva om" part of the chorus.

Also, in the title track from Young Americans, a chorus sings "I read the news today oh boy" alluding to "A Day in the Life".

In 1976, Keith Moon of The Who covered the Beatles' "When I'm Sixty-Four" for the soundtrack of the documentary All This and World War II, and sang backing vocals (with many others) on "All You Need Is Love".[5] Moon also covered "In My Life" on his album Two Sides of the Moon.

Moon once approached the Beatles' table at a London nightclub. "Can I join you?" he asked. "Yeah, sure," said Starr, as he pulled up a seat for Moon. Moon then said, "No, can I join you?", implying that he wanted to join the band. Ringo replied with, "No, we've already got a drummer." The last photo of Lennon and McCartney together was owned by Moon.

Moon's final night out was as a guest of McCartney at the preview of the film The Buddy Holly Story. After dinner with Paul and Linda McCartney, Moon and his girlfriend—Annette Walter-Lax—left the party early and they returned to his flat in Curzon Place, London. He later died in his sleep.

Peter Sellers recited the lyrics of "A Hard Day's Night" in a "Shakespearian" voice, (in the style of Laurence Olivier playing Richard III) with minimal backing music. Sellers' recording reached #14 on the UK charts in 1965.

He deliberately changed the tempo and dynamics of the original lyrics to make them comical. He left definite pauses between words, such as:

This version was re-issued in 1993, and reached Number 52 in the UK Top 75 Singles chart. He covered several other Beatles hits, including "Help!" and "She Loves You".

Sellers had casual friendships with Harrison and Starr. Harrison told occasional Sellers stories in interviews, and Starr appeared with Sellers in the anarchic movie, The Magic Christian (1970), whose theme song was Badfinger's cover version of McCartney's "Come and Get It". Starr also gave Sellers a rough mix of songs from The Beatles. The tape was auctioned, and bootlegged, after his death.

The Beatles were the first entertainment act to stage a large stadium concert. At Shea Stadium, New York City on Sunday, 15 August 1965 the group opened their 1965 North American tour to a record audience of 55,600. The event sold out in 17 minutes.[8] It was the first concert to be held at a major outdoor stadium and set records for attendance and revenue generation, demonstrating that outdoor concerts on a large scale could be successful and profitable. The Beatles returned to Shea for a very successful encore in August 1966.

The Beatle haircut, also known as the mop-top (or moptop) — because of its resemblance to a mop — or Arthur amongst fans, is a mid-length hairstyle named after and popularised by the Beatles. It is a straight cut – collar-length at the back and over the ears at the sides, with a straight fringe (bangs).

As a schoolboy in the mid '50s, Jürgen Vollmer had left his hair hanging down over his forehead one day after he had gone swimming, not bothering to style it. John Lennon is quoted in The Beatles Anthology as follows: "Jürgen had a flattened-down hairstyle with a fringe in the back, which we rather took to."

In late 1961, Vollmer moved to Paris. McCartney said in a 1979 radio interview: "We saw a guy in Hamburg whose hair we liked. John and I were hitchhiking to Paris. We asked him to cut our hair like he cut his." McCartney also wrote in a letter to Vollmer in 1989: "George explained in a 60s interview that it was John and I having our hair cut in Paris which prompted him to do the same…. We were the first to take the plunge."

Because of the immense popularity of the Beatles, the haircut was widely imitated worldwide between 1964 and 1966. Their hair-style led toy manufacturers to begin producing real-hair and plastic "Beatle Wigs". Lowell Toy Manufacturing Corp. of New York was licensed to make "the only AUTHENTIC Beatle Wig". There have been many attempts at counterfeiting, but in its original packaging this wig has become highly collectible. At a press conference at the Plaza Hotel in New York, shortly after the Beatles' arrival in the United States, Harrison was asked by a reporter, "What do you call your hairstyle?" He replied "Arthur". The scene was recreated in the movie A Hard Day's Night with the reporter asking George Harrison, "What would you call that, uh, hairstyle you're wearing?"

Mikhail Safonov wrote in 2003 that in the Brezhnev-dominated Soviet Union, mimicking The Beatles' hairstyle was seen as extremely rebellious. Young people were called "hairies" by their elders, and were arrested and forced to have their hair cut in police stations.

In 1967, most memorably on the cover of Sgt. Pepper's Lonely Hearts Club Band, all four of The Beatles sported prominent moustaches, sparking a trend for facial hair towards the end of the 60s and through the 1970s; additionally, Harrison also began to sport long hair while Lennon began to wear his signature round glasses. This look signalled a new, more mature image for the "mop tops." By the late 1960s, The Beatles generally had much longer hair than they had during the Beatlemania era, and often wore full beards, much like rock stars such as Jeff Lynne andPhil Collins would do so in the 1970s.

In the early Beatle-mania years, The Beatles would occasionally wear black, and then later grey, Edwardian collarless suits. This style of suit was adopted from the Mod youth cult, then at its peak in the UK. These suits (instead of leather trousers, plaid shirts, and slacks) became extremely common for new bands to wear after 1964.

Later, during the psychedelic era of 1967–1968, The Beatles popularised bright colours, and wore paisley suits and shirts and trousers with floral patterns. The Beatles also popularised Indian-influenced fashions such as collarless shirts and sandals.

By the late 1960s, The Beatles had adopted trends toward more casual fashions, with t-shirts, blue jeans, and denim jackets. Lennon also popularised wearing solid white suits, reflecting an interest in minimalist design that also influenced the cover of the album The Beatles. This mixture of casual wear and unconventional formal clothing could be seen in The Beatles' later years as they grew beards and drifted towards more hippie and Indian clothing.

Beatle boots are tight-fitting, Cuban-heeled, ankle-length boots with a pointed toe which originated in 1963 when Brian Epstein discovered Chelsea boots while browsing in the London footwear company Anello & Davide, and consequently commissioned four pairs (with the addition of Cuban heels) for The Beatles to complement their new suit image upon their return from Hamburg, who wore them under drainpipe trousers.

The style of hat worn by Lennon and his wife Cynthia on the Beatles' tour of the U.S. in 1964 was adopted widely by both men and women. In 1966, during the filming of How I Won the War, Lennon adopted round, thin-rimmed "teashade glasses," which became a signature element of Lennon's look. This style of eyewear is still popularly known as "John Lennon glasses."