Hergé first devised the idea of sending Tintin on a mission to the Moon while he was working on Prisoners of the Sun (1949).[4] His decision to move into the field of science fiction might have been influenced by his friendly rivalry with his colleague Edgar P. Jacobs, who had recently had success with his own science fiction comic, The Secret of the Swordfish (1950–53). He decided that it would be a two-volume story arc, as had proved successful with his earlier arcs, Cigars of the Pharaoh (1934) and The Blue Lotus (1936), The Secret of the Unicorn (1943) and Red Rackham's Treasure (1944), andThe Seven Crystal Balls (1948) and Prisoners of the Sun.[4] He had initially intended on beginning this story after the culmination of Prisoners of the Sun, but both his wife Germaine Remi and his close friend Marcel Dehaye convinced him to proceed with Land of Black Gold (1950), a story that he had previously left unfinished, instead. 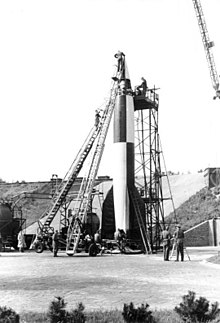 A German V-2 rocket being tested in 1942. The V-2 would serve as a major inspiration for Hergé in his work on both Destination Moon and Explorers on the Moon.

Seeking advice on the story, Hergé consulted his friend Bernard Heuvelmans, who had authored the non-fiction book L'Homme parmi les étoiles ("Man Among the Stars") (1944).[5] In autumn 1947, Heuvelmans and Jacques Van Melkebeke developed a script for the story, which they gave to Hergé. This version based Calculus' lunar expedition in a fictional location, Radio City, in the United States. It featured a return of Professor Decimus Phostle, a character who had previously appeared in The Shooting Star (1942), but this time as an antagonist; Phostle had sold the secrets of the mission in order to attain funds to buy a diamond for the actress Rita Hayworth. In early 1948, Hergé produced two black-and-white pages of this version of the story before abandoning it.[8] Hergé retained some elements of this original script in his finished version, namely the scenes in which Haddock drinks whiskey in a gravity-free environment and that in which Haddock goes for a space walk and nearly becomes a satellite of Adonis, which appear on pages 5 and 8 of Explorers on the Moon. Nevertheless, Heuvelmans thought his influence on the story to be more significant, stating that "in going through the two books we [he and Van Melkebeke] really had the impression that it was what we had originally done at the beginning. In broad outline, that was it".

Hergé hoped for the story to be as realistic as possible, and sought to eschew fantastical elements.[11] In his own words, it contained "no moonmen, no monsters, no incredible surprises".[12] To ensure this realism, he collected a wide range of documents about rockets and space travel with which to conduct research. In this he was aided by Heuvelmans, who collected pictures of rockets and atomic research facilities for him.[14] Hergé's research archive included an article from the American magazine Collier's which discussed how humanity could reach the Moon, as well as books by Pierre Rousseau and Auguste Piccard.[15] A further work that he used was L'Astronautique (1950), a book on putative space travel by the physicist Alexander Ananoff,[16] with whom Hergé began a correspondence in April 1950.[17] He also visited the Ateliers de Constructions Electriques de Charleroi's Center for Atomic Research, striking up a subsequent correspondence with its director, Max Hoyaux.[18] Hergé incorporated much of this technical information into the story, but juxtaposed it with moments of humour to make it more accessible to his young readership.[19]

According to literary critics Jean-Marc Lofficier and Randy Lofficier, possible fictional influences on Hergé's story include Jules Verne's 1870 novel Around the Moon and the 1950 American film Destination Moon.[20] Hergé was certainly inspired by a number of photographic stills from the Destination Moon film which had been published.[21] The computer system at the Sprodj space centre was visually based upon the UNIVAC I, the first computer to be created for non-military purposes.[22] Hergé based his Moon rocket on the designs of the V-2 rocket which had been developed by German scientists during World War II.[13] The red-and-white checker pattern on Hergé's rocket was based upon an illustration of a V-2 which Hergé had come upon in Leslie Simon's 1947 book German Research in World War II.[20] He commissioned the construction of a model rocket with detachable parts from his assistant Arthur Van Noeyen. He took the model to Paris where he showed it to Ananoff, asking him if it was a realistic representation of what a Moon rocket might look like. He and his assistants then used the model from which to accurately sketch when producing the comic.[23] Hergé introduced into the story the character of Boris Jorgen, who had previously appeared as an antagonist in King Ottokar's Sceptre (1939).[24] He added evidence for water on the Moon on the advice of Heuvelmans.[25]

On 7 September 1950, Hergé broke off the story with the statement "end of part one".[26] He felt the need for a break from work, having fallen back into clinical depression. He and his wife Germaine went on holiday to Gland in Switzerland, before returning to Brussels in late September.[27] Many readers sent letters to Tintin magazine asking why Explorers on the Moon was no longer being serialised, with a rumour emerging that Hergé had died.[28] On 18 April 1951, he published an open letter in the magazine explaining his absence as a result of illness caused by exhaustion and included an illustration of himself sprawled out on an armchair.[28] As Hergé planned his return to work, covers of Tintin magazine announced the imminent return of the story.[29]

Explorers on the Moon would resume after an eighteen-month hiatus,[30] returning in the 9 April 1952 issue, accompanied with a summary of the story so far.[31] Its final installment appeared on 31 December 1953.[10]

Upon the serial's publication, Hergé faced criticism for including Wolff's suicide in the story; suicide was widely viewed as a sin in Catholic-dominated Belgium. In deference to these critics, for the published book version he added Wolff's line of "perhaps by some miracle I shall escape too", to make the scene seem a less obvious suicide. Years later, Hergé expressed regret that he had capitulated on this issue.[32] The story was collected together and published by Editions Casterman as On a Marché Sur La Lune in 1954.[33] Casterman were unhappy with this title, which translates as "We Walked on the Moon", but Hergé resolutely refused to make a change.[34]

Jean-Marc Lofficier and Randy Lofficier believed that the two-part story "belongs" to Calculus as his "cosmic vision moves the story forward".[24] They further expressed the opinion that Wolff was a unique character in the Adventures of Tintin, suggesting that he is akin to a character from a John le Carré novel.[24] Referring specifically to Explorers on the Moon, they opined that it was "a true epic of the human imagination", believing that its depiction of the Moon has "withstood the test of time" more than other "proto-space exploration novels".[35] They felt that the Moon adventure was "Hergé at his best... a triumphant achievement on every level", awarding both halves of the story five stars out of five.[35]

Hergé biographer Pierre Assouline felt that the two Moon adventures "mark a stage in the development of Hergé's work".[37] Hergé biographer Benoît Peeters praised the "gradual introduction into the story of a real dimension of evil" as being something particularly effective.[38] He also expressed the view that Wolff brings "a tragic note" to the story, comparing him to the characters in the stories of Graham Greene.[38] He was critical of the two-part story arc, stating that they had "neither the liveliness and dynamism" of The Secret of the Unicorn and Red Rackham's Treasure, "nor the supernatural quality" of The Seven Crystal Balls-Prisoners of the Sun.[38]

Harry Thompson noted that Explorers on the Moon was widely regarded as Hergé's "greatest artistic achievement",[39] describing the entire moon adventure as "a technical masterpiece" as a result of its "uncannily accurate" depiction of the Moon.[40] Thompson expressed his opinion that Explorers could be compared to the work of science-fiction writers Jules Verne and H. G. Wells.[41] Focusing on the scene in which the Thom(p)sons' hair grows rapidly in bright colours, he stated that it provides an abrupt contrast with "the almost scholastic nature of the rest of the story", and that it "injects a few bright splashes" into an otherwise "carefully restrained colour scheme".[42] Philippe Goddin praised the depiction of the rocket's landing as "a magnificent spectacle, well worth the double space spread given by Hergé",[43] also highlighting what he perceived as the ending's "unprecedented dramatic tension".[44]

In his psychoanalytical study of the Adventures of Tintin, the literary critic Jean-Marie Apostolidès praised the Destination Moon-Explorers on the Moon story arc for its "meticulous attention to scientific facts", but added that this had also resulted in the story's "rather pedagogical tone".[45] He added that in these stories, the main division was "no longer Good and Evil" as it had been in previous Adventures, but "Truth and Error".[45] Apostolidès opined that despite being a "fussy and somewhat ridiculous character", through his scientific achievements Calculus grows to the "stature of a giant" in this arc, eclipsing Sir Francis Haddock (from The Secret of the Unicorn) as the series' "founding ancestor".[46] He goes on to claim that in becoming the "sacred ancestor", the voyage to the Moon becomes "a mystical quest" with science as its guiding religion.[47] Drawing comparisons between this arc and the Prisoners of the Sun story, he drew symbolic links between the scientific centre and the Inca Temple of the Sun, but noted that here Calculus was the "high priest" rather than the sacrificial victim as he had been in the previous story.[48] Moving on to discuss the Moon rocket in these stories, Apostolidès described it as a phallic object which penetrated the "virgin territory" of the Moon.[49] At the same time, he described the rocket as a "maternal belly" in which the space explorers slept.[49] Commenting specifically on Explorers on the Moon he commented that the protagonists of the story reverted to childhood when exploring the Moon, believing that they had treated it like a theme park.[50]

Literary critic Tom McCarthy stated that in the Destination Moon-Explorers of the Moon story arc, Calculus "embodies Hergé's... own wartime position, spun out into a post-war environment", representing a genius driven by his work whose activities are coincidental to national and political causes.[51] He suggested that Explorers on the Moon was "perhaps both the most wildly adventurous and the most contemplative" instalment in the series.[52] He felt that the inclusion of Jorgen being smuggled aboard the rocket as a stowaway reflected the idea of the "stranger" penetrating the "home", something which he thought was present in other Adventures.[53] Commenting on the scene in which Haddock smuggles a whisky bottle inside the Guide to Astronomy, he states "the text, in this case, is hollow, smuggling something else", which he believed was a reversal of the appearance of a parchment hidden within a model ship in The Secret of the Unicorn