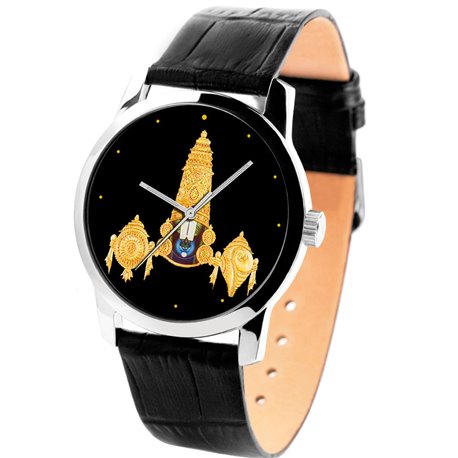 According to the Tirumala sthala Purana, the legend of Venkateswara's Avatar (incarnation) is as follows:

Once, some rishis headed by Kasyapa began to perform a sacrifice on the banks of the Ganges. Sage Narada visited them and asked them why they were performing the sacrifice and who would be pleased by it. Not being able to answer the question, the rishis approached Sage Bhrugu, who according to the Vedas, is believed to have an extra eye in the sole of his foot. To reach a solution after a direct ascertainment of reality, Sage Bhrigu first went to Satyaloka, the abode of LordBrahma. At Satyaloka, he found Lord Brahma reciting the four Vedas in praise of Lord Narayana, with each of his four heads, and attended upon by Saraswati. Lord Brahma did not take notice of Bhrigu offering obeisance. Concluding that Lord Brahma was unfit for worship, Bhrigu left Satyaloka for Kailasa, the abode of Lord Shiva. At Kailasa, Bhrigu found Lord Shiva with Parvati, and so, did not notice his presence. Bhrigu then left for Vaikuntha, the abode of Lord Vishnu.

At Vaikuntha, Lord Vishnu was reposing on Adisesha with Sri Mahalakshmi in service at His feet. Finding that Lord Vishnu also did not notice him, the sage was infuriated and kicked the Lord on His chest, the place where Mahalakshmi resides. Vishnu, in an attempt to pacify the sage, got hold of legs of the sage and started to press them gently in a way that was comforting to the sage. During this act, he squeezed the extra eye that was present in the sole of Bhrigu's foot. The extra eye is believed to represent the sage's egotism. The sage then realized his grave mistake and apologized to Vishnu. Thereupon, the sage concluded that Lord Vishnu was the most supreme of the Trimurti and told the rishis the same.

Sri Mahalakshmi was angered by the action of Her Lord in apologizing to Bhrigu who committed an offense. Out of anger and anguish, She left Vaikuntha and resided in Karavirapur now known as Kolhapur. After the departure of Mahalakshmi, a forlorn Lord Vishnu left Vaikunta, came down to Earth, and took abode in an ant-hill under a tamarind tree, beside a pushkarini on the Venkata hill, meditating for the return of Lakshmi, without food or sleep.

Taking pity on Lord Vishnu, Brahma and Maheshwara decided to assume the forms of a cow and its calf to serve Him. Surya, the Sun god, informed Mahalakshmi of this and requested Her to assume the form of a cow shepherdess and sell the cow and calf to the king of the Chola country. The king of the Chola country bought the cow and its calf and sent them to graze on the Venkata Hill along with his herd of cattle. Discovering Lord Vishnu on the ant-hill, the cow provided its milk, and thus fed the Lord. Meanwhile, at the palace, the cow was not yielding any milk, for which the Chola Queen chastised the cow herder severely. To find out the cause of lack of milk, the cow herder followed the cow, hid himself behind a bush and discovered the cow emptying her udder over the ant-hill. Angered by the conduct of the cow, the cow herder aimed a blow with his axe on the head of the cow. However, Lord Vishnu rose from the ant-hill to receive the blow and save the cow. When the cow herder saw the Lord bleed at the blow of his axe, he fell down and died of shock.

The cow returned to the Chola King, bellowing in fright and with blood stains all over her body. To find out the cause of the cow's terror, the King followed her to the scene of the incident. The King found the cow herder lying dead on the ground near the ant-hill. While he stood wondering how it had happened, Lord Vishnu rose from the ant-hill and cursed the king saying that he would become an Asura because of the fault of his servant. The king pleaded innocence, and the Lord blessed him by saying that he will be reborn as Akasa Raja and that the curse would end when the Lord will be adorned with a crown presented by Akasa Raja at the time of His marriage with Padmavati. With these words, the Lord turned into stone.

Thereafter, Lord Vishnu, also known by the name of Srinivasa, decided to stay in Varaha Kshetra and requested Sri Varaha swami to grant Him a site for His stay. His request being readily granted, Srinivasa ordained that a pilgrimage to His shrine would not be complete unless it is preceded by a bath in the Pushkarini and darshan of Sri Varaha swami and that pooja and naivedya should be offered to Sri Varaha swami first. Vishnu built a hermitage and lived there, attended to by Vakuladevi who looked after Him like a mother.

A while later, a King named Akasa Raja who belonged to the Lunar race, came to rule over Tondamandalam. Akasha Raja had no heirs, and therefore, he wanted to perform a sacrifice. As part of the sacrifice, he was ploughing the fields when his plough turned up a lotus in the ground. On examining the lotus, the King found a female child in it. The king was happy to find a child even before he performed a sacrifice and carried it to his place and gave it to his Queen to tend to it. At that time he heard an aerial voice which said "O King, tend it as your child and fortune will befall you". As she was found in a lotus, the king named her Padmavati. She grew up as a princess into a beautiful maiden and was attended by a host of maids.

One day, Lord Srinivasa, who was hunting, chased a wild elephant in the forests surrounding the hills. In the elephant's pursuit, the Lord was led into a garden, where Princess Padmavati and her maids were picking flowers. The sight of the elephant frightened the Princess and her maids. But the elephant immediately turned around, saluted the Lord and disappeared into the forest. Lord Srinivasa, who was following on horse back, saw the frightened maidens, but was repulsed with stones thrown at Him by the maids. He returned to the hills in haste, leaving His horse behind. The Lord informed Vakuladevi that unless He married Princess Padmavati, He would not be calmed.

The Lord then narrated the story of Padmavati’s previous birth and His promise to marry her. After listening to Srinivasa's story of how he had promised to marry Vedavati in her next birth as Padmavati, Vakuladevi realized that Srinivasa would not be happy unless He married her. She offered to go to Akasha Raja and his queen and arrange for the marriage. On the way she met the maids of Padmavati returning from a Shiva Temple. She learnt from them that Padmavati was also pining for Srinivasa. Vakuladevi went along with the maid servants to the Queen.

Meanwhile, Akasa Raja and his Queen Dharanidevi were anxious about the health of their daughter, Padmavati. They learnt about Padmavati's love for Srinivasa of Venkata Hill. Akasa Raja consulted Brihaspati about the marriage and was informed that the marriage was in the best interest of both the parties. Kubera lent money to Lord Srinivasa to meet the expenses of the marriage. Lord Srinivasa, along with Lord Brahma and Lord Shiva started the journey to the residence of Akasha Raja on his vahana Garuda. At the palace entrance, Lord Srinivasa was received by Akasha Raja with full honors and taken in procession on a mounted elephant to the palace for the marriage. In the presence of all the Devas, Lord Srinivasa married Princess Padmavati, thus blessing Akasa Raja. Together, they lived for all eternity while Goddess Lakshmi, understanding the commitments of Lord Vishnu, chose to live in his heart forever.

Venkateswara's temple, today is located at the top of the Seven hills in Tirumala. It stands as a special place, commemorating the marriage between the two. Everyday, a kalyana utsavam celebrates the divine union in a celebration that stretches to eternity. Even today, during the Brahmotsavam at the temple, turmeric, kumkum and a sari are sent from the temple to Alamelu Mangapuram, the abode of Padmavati.