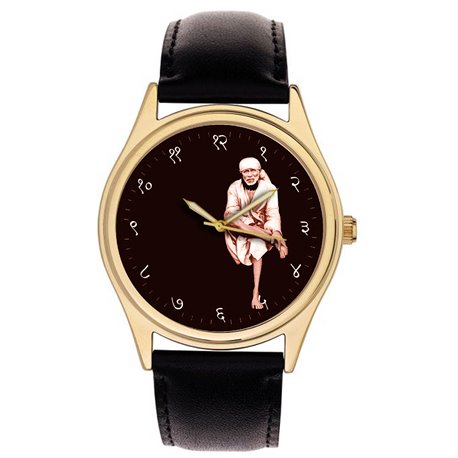 Shirdi Sai Baba, leaning against the wall of his masjid, with devotees

Sai Baba opposed all persecution based on religion or caste. He was an opponent of religious orthodoxy — Christian, Hindu and Muslim. Although Sai Baba himself led the life of an ascetic, he advised his followers to lead an ordinary family life.

Sai Baba encouraged his devotees to pray, chant God's name, and read holy scriptures. He told Muslims to study the Qur'an and Hindus to study texts such as the Ramayana, Bhagavad Gita, and Yoga Vasistha.[22] He was impressed by the philosophy of the Bhagavad Gita and encouraged people to follow it in their own lives.[23] He advised his devotees and followers to lead a moral life, help others, love every living being without any discrimination, and develop two important features of character: devotion to the Guru (Sraddha) and waiting cheerfully with patience and love (Saburi). He criticized atheism.

In his teachings, Sai Baba emphasized the importance of performing one's duties without attachment to earthly matters and of being content regardless of the situation. In his personal practice, Sai Baba observed worship procedures belonging to Hinduism and Islam; he shunned any kind of regular rituals but allowed the practice of namaz, chanting of Al-Fatiha, and Qur'an readings at Muslim festival times.[25] Occasionally reciting the Al-Fatiha himself, Baba enjoyed listening to mawlid and qawwali accompanied with the tabla and sarangi twice daily.

Sai Baba interpreted the religious texts of both Islam and Hinduism. He explained the meaning of the Hindu scriptures in the spirit of Advaita Vedanta. His philosophy also had numerous elements of bhakti. The three main Hindu spiritual paths — Bhakti Yoga, Jnana Yoga, and Karma Yoga — influenced his teachings.

Sai Baba encouraged charity, and stressed the importance of sharing. He said: "Unless there is some relationship or connection, nobody goes anywhere. If any men or creatures come to you, do not discourteously drive them away, but receive them well and treat them with due respect. Shri Hari (God) will certainly be pleased if you give water to the thirsty, bread to the hungry, clothes to the naked, and your verandah to strangers for sitting and resting. If anybody wants any money from you and you are not inclined to give, do not give, but do not bark at him like a dog." Other favorite sayings of his were "Why do you fear when I am here" and "He has no beginning... He has no end."

Sai Baba made eleven assurances to his devotees: