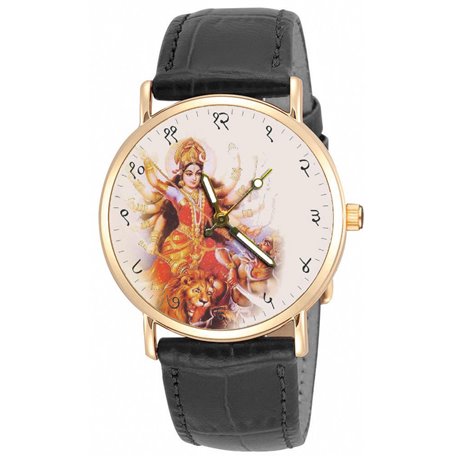 Durga (Hindustani pronunciation: [d̪uːrgaː]; Sanskrit: दुर्गा),  Bengali: দুর্গা); meaning "the inaccessible"[1] or "the invincible"; durga) Goddess Durga is the most popular incarnation of Devi and one of the forms of Goddess Shakti, a partial incarnation of Parvati. For Shaivas Durga is the wife of Shiva, for Vaishnavas and Shaktas Durga is another form of Uma or Parvati. Durga is often known as the Mother of the universe and believed to be the power behind the work of creation, preservation, and destruction of the world. Since time immemorial she has been worshipped as the supreme power of the Supreme Being and has been mentioned in many scriptures - Yajur Ved, Vajasaneyi Samhita and Taittareya Brahman. The word Durga in Sanskrit means a fort, or a place which is difficult to overrun.

Another meaning of Durga is Durgatinashini, which literally translates into the one who eliminates sufferings and the name Durga means invincible in Sanskrit. the syllable Du is synominous with the four devils of poverty, sufferings, famine and evil habits. The R refers to diseases and the Ga is the destroyer of sins, injustice, irreligion, cruelty and laziness. Thus, Hindus believe that Goddess Durga protects her devotees from the evils of the world and at the same time removes their miseries.

There are several incarnations/forms of Durga: Kali, Tara Devi, Shitala Devi, Kaushiki, Satakshi, Shakambhari, Shanta Durga, Muthyalamma, Rudrani, Kaal Ratri, Katyayani, Bhairavi, Maha Gauri, Chandi, Bhadrakali, Shivadooti, Chamundeshwari, Ekanamsha, Chandraghanta, Harsiddhi, Aparajita, Maha Durga, Modeshwari and Vindhyavasini. The Hindu Goddess Durga manifested herself as when evil forces threatened the very existence of all the Gods. To destroy these demons, the united power of all the Gods, who offered her the required physical attributes to her creation and each formed a part of Durga's body. Durga also obtained very powerful weapons such as a conch shell in Durga's hand symbolizes the Pranav or the spritual word Om, which indicates her holding on to God in the form of sound. The bow and arrows represent energy. By holding both the bow and arrows in one hand Mother Goddess Durga is indicating her control over both aspects of energy - potential and kinetic. The thunderbolt signifies firmness. The devotee of Mother Durga must be firm like thunderbolt in one's convictions. Like the thunderbolt that can break anything against which it strikes, without being affected itself, the devotee needs to attack a challenge without losing his confidence. The lotus in Durga's hand is not in fully bloomed, It symbolizing certainty of success but not finality. The lotus in Sanskrit is called pankaj which means born of mud. Thus, lotus stands for the continuous evolution of the spiritual quality of devotees amidst the worldly mud of lust and greed. The beautiful discus, which spins around the index finger of the Goddess, while not touching it, signifies that the entire world is subservient to the will of Durga and is at her command. She uses this unfailing weapon to destroy evil and produce an environment conducive to the growth of righteousness. The sword that Durga holds in one of her hands symbolizes knowledge, which has the sharpness of a sword. Knowledge which is free from all doubts, is symbolized by the shine of the sword. Durga's trident is a symbol of three qualities- Sattva (inactivity), Rajas (activity) and Tamas (non-activity)- and she is remover of all the three types of miseries- physical, mental and mystical, the mace has a pointy end at the top and it is extremely golden, the battle-axe she holds is used to chop demon heads off, the scimitar is also symbolized as knowledge with a pointy top on the end to chop demon heads off as well, the bell she holds is used to ring in many directions to call the demons, the elephant goad she holds symbolizes her son Ganesh with a pointy top on the end, the container she holds is extremely golden, the shield she holds is extremely gold as well but sometimes dark, the baton she holds is to smack demons in the face, the lasso or noose that she holds is to tie the demons up, the spear she holds symbolizes sharpness and the snake that she holds does not harm Goddess Durga, the snake is also the energy of Lord Shiva and Mother Durga.

She also destroyed Mahishasur and his fellow demons. Demonic forces are self-destructive but very powerful. Divine forces are constructive but slow and efficent. When demonic forces create imbalance, all Gods unite, becoming one divine force called Shakti or Durga. Her nine forms are Kushmanda, Shailputri, Brahmacharini, Skand Mata, Maha Gauri, Chandraghanta, Kaal Ratri, Katyayani and Siddhidatri. Durga is depicted as having eight hands, ten hands or eighteen hands. These represent eight quadrants, ten or even eighteen directions in Hinduism. This suggests that she protects the devotees from all directions. Like Lord Shiva, Ma Durga is also referred to as Triyambike meaning the three eyed Goddess. The left eye represents desire (the moon), the right eye represents action (the sun), and the central eye knowledge (fire). The lion/tiger represents power, will and determination. Maa Durga riding the lion/tiger symbolises her mastery over all these qualities. This suggests to the devotee that one has to possess all these qualities to get over the demon of ego. Mata Durga stands on a lion/tiger in a fearless pose.