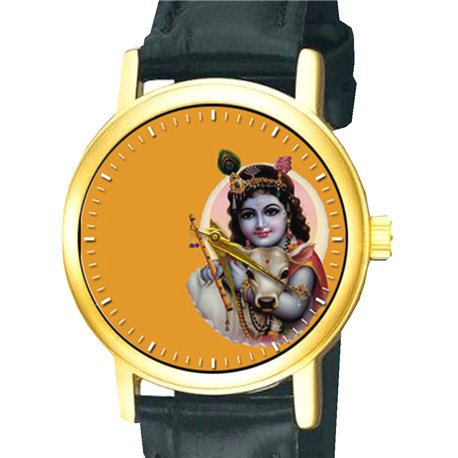 Bala Krishna (Sanskrit: बाल-कृष्ण bālakṛṣṇa, literally "child Krishna") sometimes translated to "Divine Child Krishna",[1][2] or Bal Gopal is historically one of the early forms of worship in Krishnaism and an element of the history of Krishna worship in antiquity. This tradition is considered as a part of the number of other traditions that led to amalgamation in a later stage of the historical development and culminate in worship of Radha Krishna as Svayam bhagavan. Other monotheist traditions are Bhagavatism and Cult of Gopala, that along with Cult of Krishna-Vasudeva form the basis of the current tradition of the monotheistic Krishna religion.[1] The worship of Balakrishna, the divine child, while a significant feature of the Krishna religion, often receives less attention,[3] however it is one of the most popular deities of Krishna in many parts of India today.[1] Early evidence of such worship can be found or as early as the 4th century BC according to evidence in Megasthenes and in the Arthashastra of Kautilya, when Vāsudeva (as the son of Vasudeva was worshiped as supreme Deity in a strongly monotheistic format, where the supreme Being was perfect, eternal and full of grace.[4]

Some of the miraculous acts of the form are notable. It is believed that Putana, a huge monster, was killed when the baby Krishna sucked her life from her by taking the poisoned breast she offered him.[5]

Bala-Krishna is often depicted as a small child crawling on his hands, and knees or dancing with a piece of butter in his hand.[6][7]

In the Bhagavad Gita, it appears Krishna is teaching a universal monotheistic religion of personal God and reveals himself to be all-God, svayam bhagavan. The childhood episodes of Krishna's legend became the focus of the medieval devotional cults that started to develop in a number of movements in medieval India