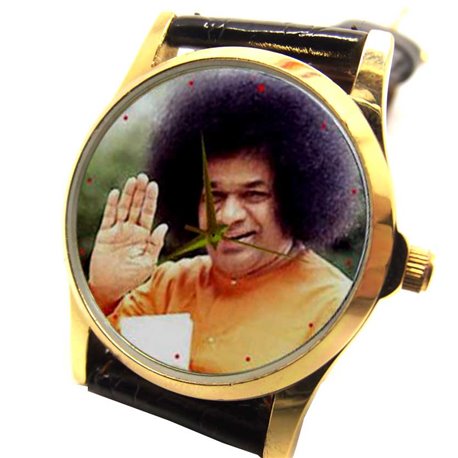 Sathya Sai Baba gave discourses on religious topics to devotees in his native language Telugu. Twice daily, some devotees engage in worship of Sathya Sai Baba by conducting rituals such as aarti and singing devotional songs in front of his picture. Sathya Sai Baba has said that his followers do not need to give up their original religion, saying "My objective is the establishment of Sanathana Dharma, which believes in one God as propitiated by the founders of all religions. So none has to give up his religion or deity... I have come not to disturb or destroy any Faith, but to confirm each in his own Faith, so that the Christian becomes a better Christian, the Muslim a better Muslim and a Hindu a better Hindu."According to "Ocean of Love", a book published by the Sri Sathya Sai Central Trust, "there is no new path that He is preaching, no new order that He has created. There is no new religion that He has come to add or a particular philosophy that He recommends ... His mission is unique and simple. His mission is that of love and compassion."

Sathya Sai Baba devotees gather on Thursdays in the US and on weekends in other regions of the world for group devotional singing (bhajans), prayer, spiritual meditation, service to the community (Seva), and to participate in "Education in Human Values" (SSEHV), also known as Sai Spiritual Education (SSE) and (in India) Balvikas. (Sai Sunday School) The Australian Sai organization states, "we come together as spiritual seekers to sing our devotion to God, singing to many different names and forms that God is worshipped by." Sathya Sai baba himself says of bhajans, "I do not need songs glorifying God which like gramophone records, reproduce songs and strings of Gods names without any feeling or yearning while singing. Hours of shouting do not count, a moment of concentrated prayer from the heart is enough."

Seva (selfless service) activities, being "at the heart of Sathya Sai Baba's teachings," strives to take an active role to serve the needs of the community. Center Seva activities and projects include

Other Sai Center activities include study of the teachings of Sathya Sai Baba and the sacred literature of all religions, Sai Spiritual Education (SSE), dynamic value parenting programs, and study circles (taking a point and each person discussing what it means to them).

Through center activities, the hope is to achieve the practical spirituality of incorporating the universal human values in all aspects of life and during every conscious moment.

Sathya Sai Baba advocates reverence, adoration and gratitude to the Mother, (and parents) as being God, and the first (and foremost) teacher and guru. Sai Baba oftens cites well known figures (Abraham Lincoln, Gandhi,  Ishwar Chandra Vidyasagar) who have attained their good character, humility and morality due to listening to the advice of their mother. Sai Baba has said, "There is nothing greater than mother's love. Mother's words are always sweet." Additionally, Sai Baba has repeatedly stated "Rama, Krishna, Shivaji and Gandhi became what they were because of their mothers. Same way, I am Sathya Sai today because of Easwaramma (his mother)!"