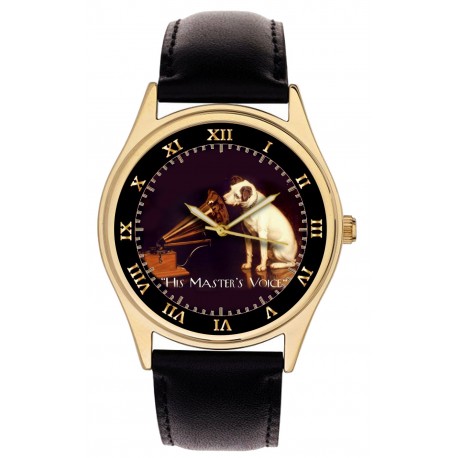 Nipper was born in 1884 in Bristol, England, and died in September 1895.[1] He was likely a mixed-breed dog, although most early sources suggest that he was a Smooth Fox Terrier, or perhaps a Jack Russell Terrier,[2][3][4] or possibly "part Bull Terrier".[5][6] He was named Nipper because he would "nip" the backs of visitors' legs.[7]

Nipper originally lived with his owner, Mark Henry Barraud, in the Prince's Theatre where Barraud was a scenery designer.[8] When Barraud died in 1887, his brothers Philip and Francis took care of the dog, then Francis took Nipper to Liverpool, and later Mark's widow in Kingston upon Thames, Surrey.[6] Nipper died of natural causes in 1895 and was buried in Kingston upon Thames at Clarence Street, in a small park surrounded by magnolia trees. As time progressed, the area was built upon, and a branch of Lloyds Bank now occupies the site. On the wall of the bank, just inside the entrance, a brass plaque commemorates the terrier that lies beneath the building.[6]

On 10 March 2010, a small road near to the dog's resting place in Kingston upon Thames was named Nipper Alley in commemoration of this resident.[9]

In 1898, three years after Nipper's death, Francis Barraud, his last owner and brother of his first owner, painted a picture of Nipper listening intently to a wind-up Edison-Bell cylinder phonograph. Thinking the Edison-Bell Company located in New Jersey, USA,[7] might find it useful, he offered it to James E. Hough, who promptly replied, "Dogs don't listen to phonographs". On 31 May 1899, Barraud went to the Maiden Lane offices of The Gramophone Company with the intention of borrowing a brass horn to replace the original black horn on the painting. Manager William Barry Owen suggested that if the artist replaced the machine with a Berliner disc gramophone, that he would buy the painting. The image became the successful trademark of the Victor and HMV record labels, HMV music stores, and the Radio Corporation of America, after the acquisition of the Victor company in 1929. The trademark was registered by Berliner for use in the United States on 10 July 1900.[10] (See His Master's Voice for a complete history of the brands based on Nipper.)

It is difficult to say how the idea came to me beyond the fact that it suddenly occurred to me that to have my dog listening to the phonograph, with an intelligent and rather puzzled expression, and call it 'His Master's Voice' would make an excellent subject. We had a phonograph and I often noticed how puzzled he was to make out where the voice came from. It certainly was the happiest thought I ever had.

The slogan "His Master's Voice", along with the painting, was sold to The Gramophone Company for £100 (equivalent to £10,899 in 2019) – half for the copyright and half for the physical painting itself.[12] The original oil painting hung in the EMI boardroom in Hayes, Middlesex, for many years. 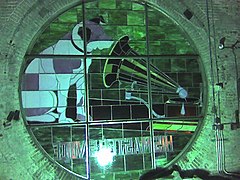 The iconic image of a terrier-mix dog, Nipper, looking into a phonograph became an international symbol of quality and excellence for the Victor Talking Machine Company.[13] Nipper lives on through the brand names; he even appeared in ads on television with his "son", a puppy named Chipper who was added to the RCA family in 1991.[14] Real dogs continue to play the roles of Nipper and Chipper, but Chipper has to be replaced much more frequently, since his character is a puppy.

Nipper continues to be the mascot of HMV stores in countries where the entertainment retailer has the rights to him. Both RCA Records and EMI have reduced the use of Nipper in the global music market due to the fragmented ownership of the trademark.

Victor Company of Japan (JVC) also uses the logo within Japan, which includes the "His Master's Voice" slogan.

A huge, four-ton Nipper can be seen on the roof of the old RTA (former RCA distributor) building now owned by Arnoff Moving & Storage[15] and located at 991 Broadway in Albany, New York.[11] A second, slightly smaller one was purchased by Jim Wells from RCA in Baltimore for $1. After spending many years on private property in Nipper Park in Merrifield, Virginia, perched over Lee Highway (U.S. Route 29), it has now been returned to Baltimore, Maryland, where it originally graced the former RCA Building on Russell Street. Nipper now sits atop the Maryland Historical Society building at Park Avenue and West Centre Street in Baltimore. Though smaller than the Albany Nipper, Baltimore's includes a gramophone for Nipper to listen to. The Baltimore Nipper was saved when the Virginia site where he briefly resided was sold to developers. It is currently the location of a group of town-houses. The street leading to the development is named Nipper Way.[16]

A small statue of Nipper can be seen perched above a doorway in the Merchant Venturers Building on the corner of Park Row and Woodland Road in Bristol; this building, part of the University of Bristol, stands near the site of the old Prince's Theatre. 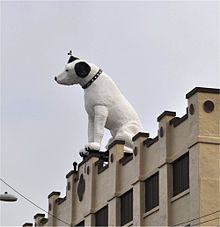 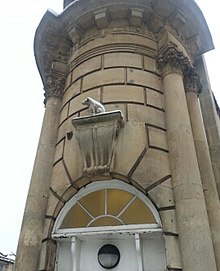 Nipper above a doorway of the Merchant Venturers Building in Bristol

A life-size ornament of Nipper appears in the music video to Cyndi Lauper's song "Time After Time."