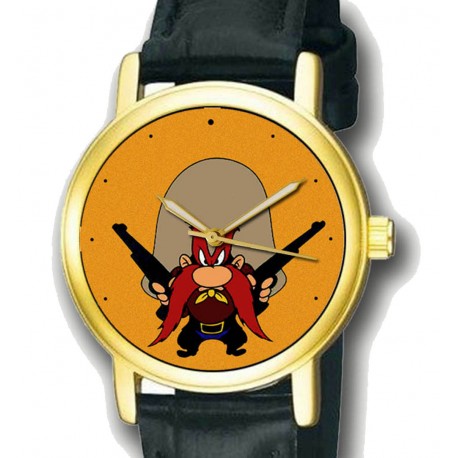 Yosemite Sam is an American animated cartoon character in the Looney Tunes and Merrie Melodies series of cartoons produced by Warner Bros. Animation. The name is somewhat alliterative and is inspired by Yosemite National Park. He is commonly depicted as an extremely grouchy gunslinging prospector, outlaw, pirate or cowboy with a hair-trigger temper and an intense hatred of rabbits, particularly Bugs Bunny. Along with Elmer Fudd, he is the de facto archenemy of Bugs Bunny. In cartoons with non-Western themes, he uses various aliases, including "Chilkoot Sam" (named for the Chilkoot Trail; Sam pronounces it "Chilli-koot") in 14 Carrot Rabbit (although in the same cartoon, when he tries to gain Bugs Bunny's trust, he cleverly invents alias "Square-deal Sam"), "Riff Raff Sam" in Sahara Hare, "Sam Schulz" in Big House Bunny, "Seagoin' Sam" in Buccaneer Bunny, "Shanghai Sam" in Mutiny on the Bunny, and "Sam Von Schamm the Hessian" inBunker Hill Bunny and many others. During the Golden Age of American animation, Yosemite Sam appeared in 33 shorts.

Animator Friz Freleng introduced the character in the 1945 cartoon Hare Trigger. With his fiery, irascible temper, short stature (in two early gags in Hare Trigger, a train he is attempting to rob passes right over top of him and he has to use a set of portable stairs to get on his horse; in Bugs Bunny Rides Again, he rides a miniature horse), and fiery red hair, Sam was in some ways an alter-ego of Freleng. The animator often denied any intentional resemblance. However, in the Looney Tunes Golden Collection, surviving members of his production crew assert, and the late director's daughter acknowledges, that Sam definitely was inspired by Freleng. Other influences were the Red Skelton character Sheriff Deadeye and the Tex Averycartoon "Dangerous Dan McFoo". When he does a "slow burn" and cries "Oooooh!" he borrows a bit from such comedic character actors as Jimmy Finlayson (a frequent foil to Laurel and Hardy) and Frank Nelson (one of Mel Blanc's costars onThe Jack Benny Program). Freleng also cited the Terrible-Tempered Mr. Bang, a character in the Toonerville Trolley comic strip, as an influence. In his memoir Chuck Amuck: The Life and Times of an Animated Cartoonist, Chuck Jones says that a great-uncle who occasionally visited his family was a retired Texas Ranger who was short, had red hair, a large mustache, and a hair-trigger temper. Mike Maltese originally considered calling the character Texas Tiny, Wyoming Willie, or Denver Dan, but then settled on the final name.

Other characters with Sam-like features appear in several Looney Tunes shorts. The Bugs Bunny entry Super-Rabbit (1943) features the cowboy character "Cottontail Smith", who sounds a lot like Sam. Stage Door Cartoon (1944), another Bugs Bunny offering, features a southern sheriff character that sounds very much like Sam, except for a more defined southern stereotype to his voice. In a Daffy Duck cartoon called Along Came Daffy (1947), Daffy has to contend with two Yosemite Sams, one with Sam's red hair and one with black hair. Finally, Pancho's Hideaway (1964) features a Mexican villain who is designed much like Sam but has a different accent. In addition, in the 1949, Chuck Jones-directed cartoon Mississippi Hare, Bugs Bunny battles with an old, pistol-toting gambler called Colonel Shuffle, one whose role could have easily been portrayed by Sam. (The Colonel reappears in "Dog Gone South", this time pitted against Charlie Dog, and accompanied by a bulldog named Belvedere, who resembles Hector the Bulldog).

Freleng created Yosemite Sam to be a more worthy adversary for Bugs Bunny. Until then, Bugs' major foe had been Elmer Fudd, a man so mild-mannered and dim-witted that Freleng thought Bugs actually came off as a bully by duping him. Sam, on the other hand, was extremely violent and belligerent, not at all a pushover like Fudd. Freleng compacted into a tiny body and 11-gallon hat the largest voice and the largest ego "north, south, east, aaaaand west of the Pecos".

For over 19 years, except for one cartoon (Hare-Abian Nights in 1959) Freleng's unit had exclusive usage of Sam at the Warner studio. Though officially a cowboy, Freleng put Sam in a different costume in almost every film: a knight, a Romanlegionary, a pirate, a royal cook, a prison guard, a duke (Duke of Yosemite, no less), a Confederate soldier, a mountain climber (climbing the 'Shmadderhorn' mountain in Switzerland), a hen-pecked househusband and even a space alien. The humor of the cartoons inevitably springs from the odd miscasting of the hot-tempered cowboy. However, some countries seem to prefer his pirate incarnation, as "Sam the pirate" is his official name in France[2] and a frequent alternative name inItaly.

While Sam's basic character is that of a cowboy, he wears a black mask (or actually, just a wide black outline on the outer sides of his eyes) to show that he's an outlaw. This is so associated with his persona that he wears the mask even when dressed as a duke, a riff, a pirate, or a Viking. Sam is significantly tougher and more aggressive than Elmer Fudd when challenging Bugs Bunny. He is also quicker to learn from his mistakes, and never falls for the same ploy twice. But despite Sam's bluster, he doesn't prove much brighter than Elmer in his encounters with Bugs. His noise contrasts to the calmly cocky rabbit. Sam's own cockiness gets the best of him; Bugs can see he is incapable of turning down a challenge. Every time Bugs dares Sam to "step across that line", he can't help but do so, even if he steps off into empty space or down a mine shaft. In its a Wild and Woolly Hare Sam and Bugs play "Chicken" in two locomotives going toward one another-Sam doesn't crash into Bugs but still ends up losing. In the classic Knighty Knight Bugs Sam is a black knight with a fire breathing dragon who ends up going to the moon.

While unscrupulous and ornery himself, Sam consistently displays an odd respect for religious conventions. Whenever he is preparing to shoot Bugs, he tells the "varmint," "Now say your prayers!", allowing Bugs enough time to foil his intentions.

Another source of humor is the ludicrous lengths Sam will go to just to "get even" – often with disastrous results to himself and his surroundings.

A running gag in Yosemite Sam cartoons is that Sam's animals (camel, elephant, dragon) or airplanes never stop when he wants them to; Sam then loses his temper and bonks the offending animal/machine. A short intermission clip from the Bugs Bunny Roadrunner show has Bugs about to sing on his banjo-which wakes up Sam who is trying to sleep; Sam loses his temper and smashes the banjo-but not Bugs.

Yosemite Sam made appearances in several television specials in the 1970s and 1980s, and in three of the Looney Tunes feature-film compilations.

Sam was the star of his own comic book series from 1970 to 1984, for a total of 81 issues. Published by Gold Key / Whitman Comics, the official title of the series was Yosemite Sam and Bugs Bunny.[3][4]

Yosemite Sam was one of the classic Looney Tunes characters who appeared as faculty members of Acme Looniversity in the 1990s animated series Tiny Toon Adventures. Sam was shown teaching classes in Firearms and Anvilology (the study of falling anvils, a staple joke in the Looney Tunes genre), and was sometimes portrayed as the school principal (though at least one episode identified Bugs Bunny as the principal, and Wile E. Coyote was Dean of Acme Loo). As with all the main Looney Tunes characters, Sam had a student counterpart at Acme Loo, Montana Max.

Yosemite Sam also appeared along with Bugs Bunny in a number of Mirinda commercials in early 90s, most probably due to direct competition to Fanta, being advertised with Disney Characters at that time.

Sam also appeared in The Warners 65th Anniversary Special and two episodes of 1995's The Sylvester and Tweety Mysteries.

In the 2003 movie Looney Tunes: Back in Action, Yosemite Sam is a bounty hunter employed by the Acme Corporation who was hired to finish off DJ Drake and Daffy Duck. In this film, he owns a casino in Las Vegas, which he calls Yosemite Sam's Wooden Nickel, and is accompanied byNasty Canasta and Cottontail Smith (who may be originally employed as his security guards) (from Super Rabbit). He goes as far as betting a large sack of money to get the card, stealing Jeff Gordon's car, and even using a stick of Dynamite to beat DJ and Daffy. Though putting up a good chase, in the end, his car crashes into the wall of his own casino while the spy car flies above it. He get launched in a pitch black room full of Dynamite, and he lights all of them when he tries to look around with a match. He is last seen in the Acme building trying to cover his failure on DJ, Dusty Tails, and Daffy, though his boss couldn't even understand what he's saying.

Sam makes a cameo appearance in Disney/Amblin's Who Framed Roger Rabbit, complete with his "britches" on fire. He also appears in the movie Space Jam as a player for the Tune Squad. In a memorable scene, he and Elmer Fudd shoot off the teeth of one of the Monstars while clad inPulp Fiction-esque attire, complete with Dick Dale's Misirlou playing. In an earlier scene, when the Nerdlucks hold all the toons hostage, Sam sneaks up on the Nerdlucks, pointing his pistols at them, and orders them to release all the toons, only to have the Nerdlucks fire a laser pistol back at him, which leaves Sam naked and beardless as the phasers burned off his mustache.

A younger version of Sam had appeared in Baby Looney Tunes, in songs. In one episode, Bugs dresses up as Baby Sam for Halloween.

Yosemite Sam appears in multiples episodes of The Looney Tunes Show, voiced by Maurice LaMarche. He first appeared in the show in two Merrie Melodies segments called "Blow My Stack", and "Moostache". Yosemite Sam is one of Bugs and Daffy's neighbors.

Yosemite Sam made two cameo appearances in a MetLife commercial in 2012. In one of the ads, a producer knocked on Yosemite Sam's trailer and he thought there were "varmints" bothering him and he took down and shot some fur coats of animals with rage.