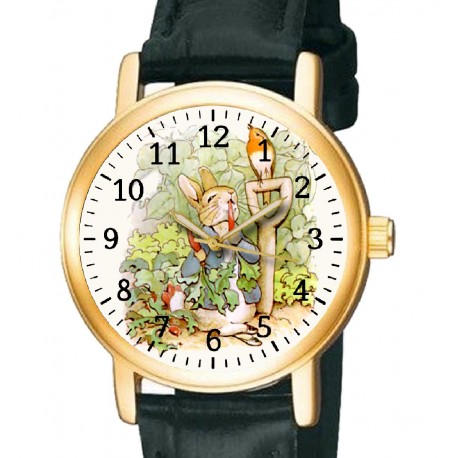 Peter Rabbit is a fictional animal character in various children's stories by Beatrix Potter.[1] He first appeared inThe Tale of Peter Rabbit in 1902 and subsequently in five more books between 1904 and 1912. Spinoff merchandise includes dishes, wallpaper, and dolls. He appears as a character in a number of adaptations.

The rabbits in Potter's stories are anthropomorphic and wear human clothes: Peter wears a jacket and shoes. Peter, his widowed mother, Mrs. Josephine Rabbit, as well as his sisters, Flopsy, Mopsy, and Cotton-tail live in a rabbit hole that has a human kitchen, human furniture, as well as a shop where Mrs. Rabbit sells various items. Peter's relatives are Cousin Benjamin Bunny and Benjamin's father Mr. Benjamin Bunny.

Peter Rabbit was named after a pet rabbit Beatrix Potterhad as a child called Peter Piper. The first Peter Rabbit story, The Tale of Peter Rabbit, was originally created in 1893 as a letter to Noel Moore, the five-year-old son of Potter's former governess, Annie Moore. The boy was ill and Potter wrote him a picture and story letter to help him pass the time and to cheer him up. The letter included sketches illustrating the narrative. 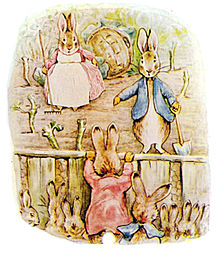 Grown up Peter in his nursery garden, from The Tale of The Flopsy Bunnies

Peter Rabbit made his first appearance in 1902 in The Tale of Peter Rabbit. Peter disobeys his mother's orders and sneaks into Mr. McGregor's garden, eating as many vegetables as he can before Mr. McGregor spots him and chases him about. Peter manages to escape, but not before losing his jacket and shoes, which Mr. McGregor uses to dress a scarecrow. Peter returns home weary and ill and is put to bed with a dose of chamomile tea.

In The Tale of Benjamin Bunny, first published in 1904, Peter's cousin Benjamin Bunny brings him back to Mr. McGregor's garden and they retrieve the clothes Peter lost in The Tale of Peter Rabbit. But after they gather onions to give to Peter's mother, they are captured by Mr. McGregor's cat. Benjamin's father arrives and rescues them, but also reprimands Peter and Benjamin for going into the garden by whipping them with a switch. In this tale, Peter displays some trepidation about returning to the garden.

In The Tale of The Flopsy Bunnies, first published in 1909, Peter has a small role and appears only briefly. He is grown up and his sister Flopsy is now married to his cousin Benjamin Bunny. The two are the parents of six little Flopsy Bunnies. Peter and his mother keep a nursery garden and the bunnies come by asking him for spare cabbage.

In The Tale of Mr. Tod, first published in 1912, Benjamin and Flopsy's children are kidnapped by notorious badger Tommy Brock. Peter helps Benjamin chase after Brock, who hides out in the house of the fox Mr. Tod. Mr. Tod finds Brock sleeping in his bed and as the two get into a scuffle, Peter and Benjamin rescue the children.

Peter makes cameo appearances in two other tales. In The Tale of Mrs. Tiggy-Winkle, first published in 1905, Peter and Benjamin are customers of Mrs. Tiggy-Winkle, a hedgehog washerwoman. The two rabbits are depicted in one illustration peeping from the forest foliage. In The Tale of Ginger and Pickles, first published in 1909, Peter and other characters from Potter's previous stories make cameo appearances in the artwork patronising the shop of Ginger and Pickles.

To mark the 110th anniversary of the publication of The Tale of Peter Rabbit, Frederick Warne & Co. commissioned British actress Emma Thompson to write The Further Tale of Peter Rabbit, in which Peter ends up in Scotland after accidentally hitching a ride on Mr. and Mrs. McGregor's wagon. The book was released on 18 September 2012.

On 27 September 2012, it was announced that Emma Thompson would write two more Peter Rabbit books, with the first released in Christmas 2013 and the second sometime in 2014.

Potter created a soft doll depicting Peter Rabbit and a Peter Rabbit board game shortly after the tale's first publication. The character has been depicted in a multitude of spinoff merchandise such as porcelain figurines and dishes. Peter Rabbit had also appeared on the packaging of the infant formulaEnfamil.

Peter Rabbit was the first soft toy to be patented, in 1903, making Peter the oldest licensed character.[6]Frederick Warne & Co owns the trademark rights of the Beatrix Potter characters.[7] However, most of the stories are in the US public domain, as they were published before 1923.

The Peter Rabbit (rather than other Beatrix Potter characters) stories and merchandise are very popular in Japan: many Japanese visit the Lake District after becoming familiar with Potter's work at an early age at school. There is an accurate replica of Potter's house and a theme park in Japan, and a series of Mr McGregor's gardens in one of the largest banks. Merchandisers in Japan estimate that 80% of the population have heard of Peter Rabbit.